A decade after it was first announced, and after many delays and setbacks along the way, Galway's three-screen arthouse cinema, Pálás, finally opens its doors tomorrow evening, Friday February 23.

At a press coffee morning on Wednesday, local journalists were shown around the building and heard short speeches from Element Pictures' director Andrew Lowe (whose company runs Pálás ), general manager Katie Walsh, and film programmer Charlene Lydon, went so far as to suggest that the wait will have been worthwhile.

While folk in hi-vis jackets and hard hats were still putting the finishing touches to the venue, there was more than enough on show to whet one's appetite about the cinema-going experience which Pálás will offer its patrons.

The building itself has been imaginatively shaped and designed by architect Tom de Paor, comprising five storeys which house three cinema spaces, a beautiful bar and restaurant. Throughout the building there are 22 beautiful resin-coated windows designed by Irish artist Patrick Scott. Operated by Element Pictures - which also run Dublin's acclaimed Light House Cinema - Pálás is a distinctive architectural space which is sure to become a popular location for casual visitors and cineastes alike.

Andrew Lowe revealed that Pálás will be closely connected with the local community. This extends from the venue becoming the new home of both Galway Film Society (whose new season starts in April ) and the Galway Film Fleadh, to sourcing local providers for both its bar and restaurant. The restaurant will be run by Sheridan's Cheesemongers and promises to serve customers with hearty, seasonal and flavoursome fare, while the bar will also draw on local suppliers such as Galway Hooker Brewery and Woodberry wines. 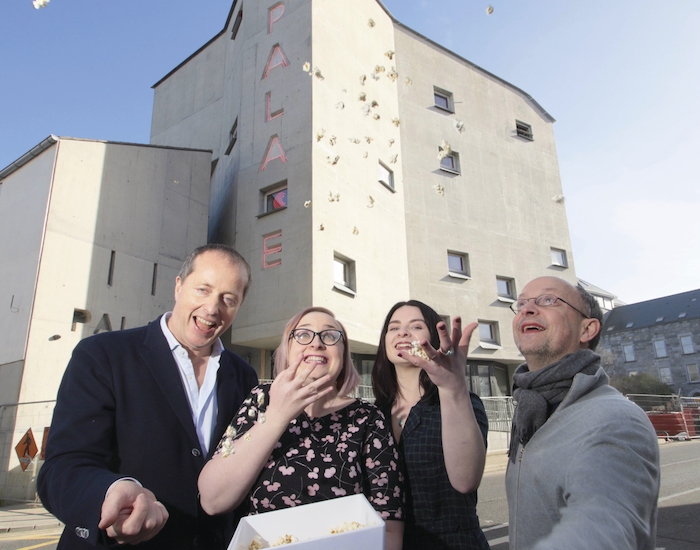 Katie Walsh outlined details of the building. The basement houses Screen 1, the largest cinema, with 161 seats, Screen 2 on second floor has 67 seats, Screen 3 on the top floor has 93 seats. The box office will be open from 8am each morning and will also be serving tea and coffee for takeaway. The restaurant is located on the ground floor and has 35 seats while the bar has 80 seats. There are ticketing points of sale all over the building and and tickets are also available online from the website Palas.ie which can be printed out at home or brought as an email attachment. There are self-scanning devices at the entrance to each screen - and Pálás is the first cinema in Ireland to feature this cutting edge technology.

Last, but by no means least, Charlene Lydon gave a taste of what we can expect from Pálás's film programme, which will be a mix of new and classic titles, and the best of Irish and independent releases. The three films with which the venue opens are among the most highly-praised current releases; Guillermo del Toro's The Shape of Water, Lady Bird (starring Saoirse Ronan ), and the Tonya Harding biopic I, Tonya.

Also in the pipeline is a season devoted to director Wes Anderson, whose new film Isle of Dogs is to be released shortly; anniversary screenings of Grease and A Fistful of Dollars; concert films featuring Talking Heads (the classic Stop Making Sense ) and Nick Cave and the Bad Seeds; and critically acclaimed releases like Michael Inside, Making the Grade and A Fantastic Woman.