Insider feels the pain of all those who have been affected by the recent flooding events in Galway city. Nor should we forget farmers in the county, who are still feeling the effects of the incessant rainfall.

It can be no comfort to know that expert opinion tells us how climate change, which is the root cause of the more extreme and unstable weather of recent times, will see many more such floodings in Galway in years to come - so forget any talk about this having been a 'one in 200 year event!'

Galway has seen many similar floods over recent decades. Insider remembers some years ago - while he and his family lived in one of the Victorian houses on New Docks Road - replacing old wallpaper with new Anaglypta in the hall just inside the front door, he spotted a pencilled note on the plaster about 36 inches up from floor level, telling all who might see it, that flood water came up to this mark when the house was last flooded. 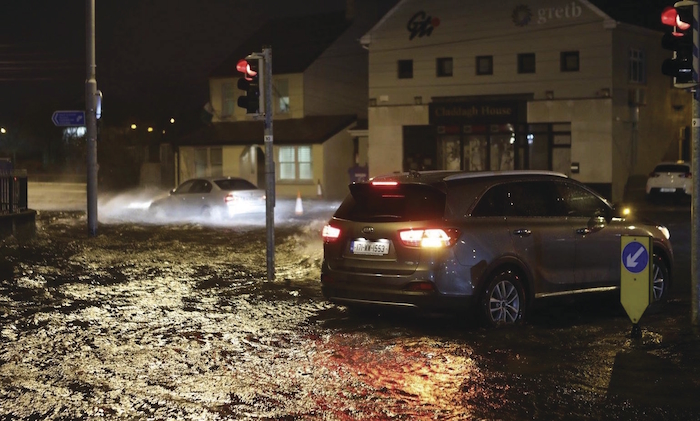 This must have been at a time when the old dock gates were positioned opposite the house, back before the docks were extended and deepened. The dock gates were repositioned in the early 1960s, reducing the frequency of overtopping. When my family lived there in the 1980s, water coming over the road from the dock only ever reached as far as the door, but did not come inside in the 12 years we were there. The woman who lived next door, always had a flood door device ready to seal her front door. We soon learned why!

In that light, Insider must ask- does anyone in Galway believe that if the planned harbour extension, with its pier stretching out into inner-Galway, had already been in place, say on Tuesday January 2, the flooding caused that evening would not have been worse? Yet the good people of the Claddagh who have reason to know, were pooh-poohed for claiming that such a development could be a cause of much more serious flooding should this pier be put in place. Their opinions were virtually ignored by experts at an oral hearing. 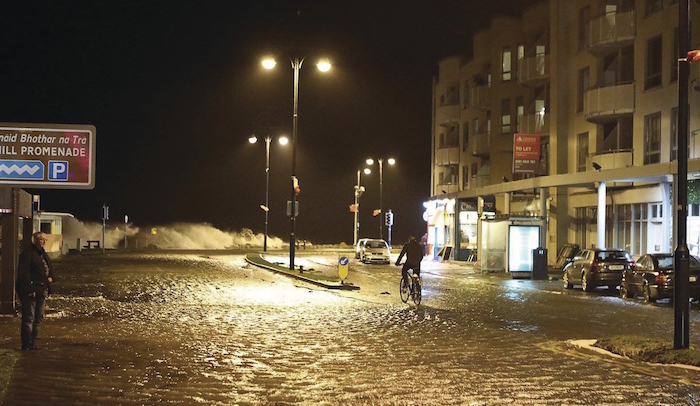 What preparations are now being made in Galway to prevent such flooding in future? Insider is unaware of any solid proposals. The OPW and consultants (JBA consulting ) were in Galway in 2016 to publicly display their recommendations for the placement of flood protection devices. As of yet we still await hearing what final physical works are to be recommended and put in place! Funding for Galway City of Culture 2020 seems to be more important than securing funding to secure public safety and for future flood prevention.

JBA consulting also tells us, “Galway city and Salthill are both affected by tidal flooding and would benefit from an improved tidal warning system. The OPW, as part of the Irish Coastal Protection Strategy Study, has developed a storm surge model for the coast of Ireland. This model is currently being trialled with a view to evaluating and improving its capability. The tide and storm surge forecasts are provided twice daily to a project website during the autumn and winter period which is accessible to local authorities.

"The service provides surge, astronomical, tide and total water level time series predictions approximately 65 hours in advance. High resolution forecasts are available at Galway Bay and could be used to provide warning to the residents, businesses, and visitors. The model is currently only in operation in the autumn/winter months and its operation may need to be extended. As this is a national system its costs would be low when broken down by AFA. The system cost €87,000 to put in place with annual running costs of €68,100, which is the cost that is currently incurred by the OPW." 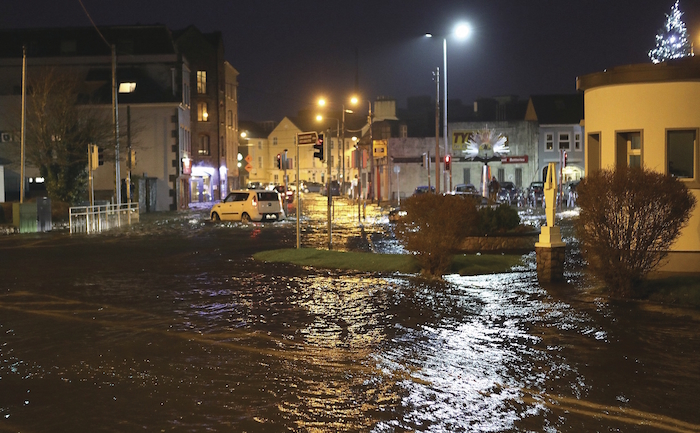 Management at City Hall made no mention in its post-flood assessment and did not seem to know about the predicted January 1-2, 2018 supermoon, tidal surge during which you should expect higher-than-usual spring tides.

The Dyke Road embankment is also a vital defence to many areas of Galway and this should be maintained effectively. It is recommended by JBA consulting, that all formal effective defences along the River Corrib be maintained to ensure the current standard of protection. Yet Insider was told the growth of shrub and tree roots planted along the top of the embankment was likely to weaken the earthworks. These now need stabilisation if the river is to be kept from taking back its flood plain along the Headford Road, where the shopping centre stands. 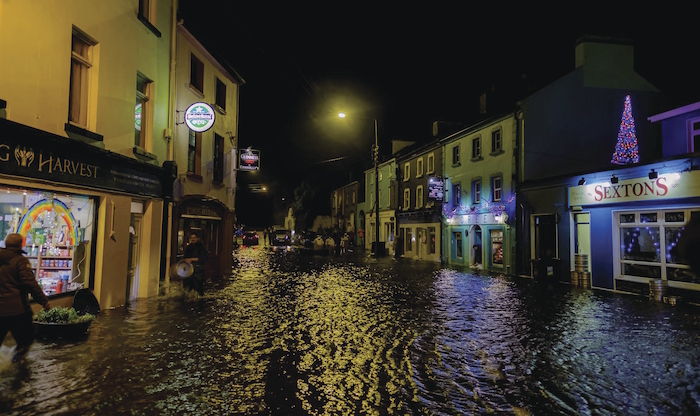 Waterford city has put in some very attractive heavy glass panels at the Adelphi Quay along the River Suir. Limerick has also done some work in the area of the Clancy Strand. What has Galway done? The unsightly and now bypassed rubber Aquadam device at the Spanish Parade, proved useless when it really mattered. Insider knows that Labour city councillor Niall McNelis will not rest until something more permanent is put in place to ensure his business, and others, along with homes in the affected areas, are fully protected in years to come. But at what cost? It is being suggested by the city CEO and other experts, that cost benefit analysis indicate some parts of Galway city may well be left to suffer what nature puts our way and be left uninsurable. It will be left up to those that could be affected to campaign against this kind of thinking.

Galway and climate chaos - the future? 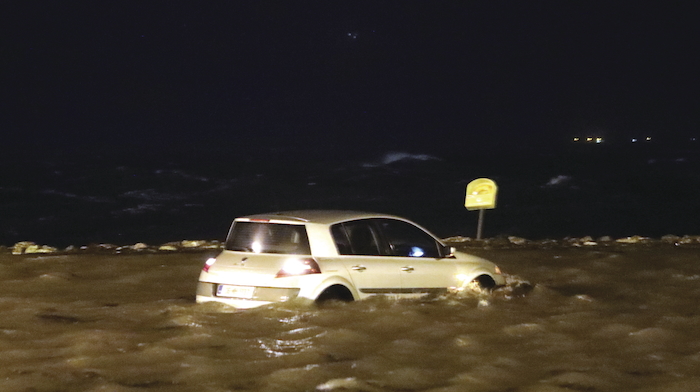 Let us here think a bit about what future is there for Galway if the local and national government continue to ignore their obligations to control emissions that are said to be the cause of climate change, or, as environmental writer John Gibbons calls it, "climate chaos".

A recently leaked draft of the International Panel on Climate Change's forthcoming report on keeping global warming at 1.5 degrees Celsius, gives us reason to hope this target is attainable, but only if “urgent action is taken immediately”, warned Dr Bert Metz.

Dr Metz has, for many years, served as chief negotiator for the Netherlands and the EU on the UN Framework Convention on Climate Change and the Kyoto Protocol. The good doctor goes on to tell us “The good news is that the technological solutions needed – zero emissions energy production, electric vehicles, climate-smart agricultural techniques, carbon capture and storage – are all available now and are becoming increasingly cost competitive.” Tell that to any electric powered car owner in Galway looking for a charging point, when there are so few public charging points installed on the streets of the city. Do you know where they are?

Among Irish climate experts is Prof John Sweeney of Maynooth University, who has warned that Dublin and Galway have expanded into low-lying estuaries. With some housing estates having been built on reclaimed land, a growing population has been exposed to coastal flood risk. Past resilience is no guarantee of future immunity from coastal flooding as sea levels, and potentially storm surge levels, rise. 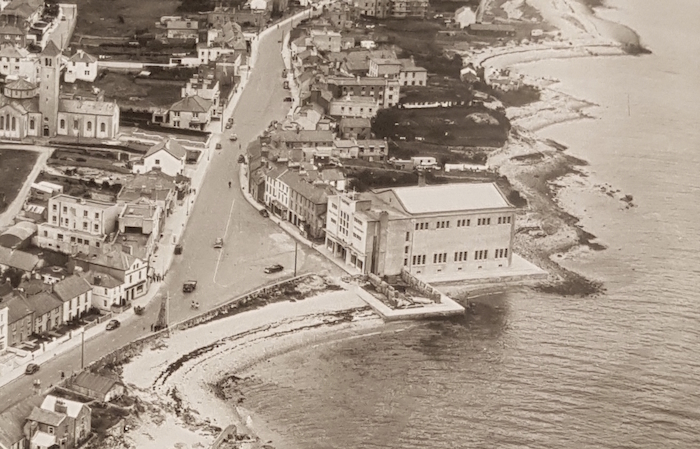 This is explained if you look at this aerial picture [above], taken in 1954, of Salthill, with Seapoint at the centre (picture from Irish Independent - Archives 1951-1958 ). It shows just how much of the beaches along the Salthill coastline are now is occupied by housing. Quincentennial Drive, Ocean Wave, Beach Court, Grattan Park, Whitestrand, etc, were all reclaimed from the sea when the Dr Colohan and Grattan roads were constructed. It should be no surprise to anyone living in these areas that the sea will always try to reclaim its own.

If Government fails to encourage us to rein in on our climate change emissions, this is exactly what might happen, when the next Ophelia, Brian, or Eleanor arrives in Galway to taunt us. You have been warned. Galway politicians please note.