The Prophet Mohammad, when asked why he had never visited Damascus, replied that you "only enter paradise once". Thus advised, I joined a group of international peace activists on a tour of Syria.

My interest in Syria grew from 2007 after retired US General Wesley Clarke revealed Pentagon plans to overthrow seven governments in five years – Syria was on the list as was Libya. When President Obama threatened to attack Damascus in September 2013, Margaretta D’Arcy and I blocked Shannon Airport’s runway demanding “Hands Off Syria”. We were sure weapons used to directly attack Syria or to be funnelled to so-called “rebels” would be transported via Shannon or Irish airspace.

EU sanctions mean no direct flights to Syria. Therefore, Beirut was our first destination, from where we took the biblical road to Damascus by taxi. En route to the Syrian border, we drove through a built-up, predominantly Druze, district. The taxi stopped so Dave, a filmmaker, could fix his 'GoPro' cam to the outside of the windscreen. When he began, suddenly – like the thunderbolt that greeted St Paul – a car appeared. One of its male occupants signalled filming was prohibited. They ensured compliance, following us until we departed their patch.

Encountering numerous checkpoints, it was 6pm, and dark, when we reached our hotel in Damascus’ old city. Security was tight. Later, in the hotel restaurant we could hear the distant sounds of mortar fire. Two kilometres away two jihadist groups still occupy the suburb of Jobar.

Yet, what greeted us outside the hotel that Thursday night was wholly unexpected, reminiscent of Galway’s Quay Street on a Friday or Saturday night - the place was teeming with young people out for the night: the road bumper to bumper with cars, Arabic music booming from open windows. Thursday night is the start of the Muslim weekend and the seriously secular were letting their hair down. We retired to a beer garden. Sleeping proved difficult not because of our proximity to the jihadists, but the noise from the neighbouring nightclubs.

By daylight, armed soldiers were very visible, standing or sitting at street corners nursing AK47s. It was not threatening, but reassuring. Car boots were searched at permanent checkpoints and even sporadic checking of males’ identity cards - all very reminiscent of life in Belfast during the “Troubles” minus the animosity.

Everyone was extremely friendly. A simple "Salam" (meaning: Peace/Hello ), hand on heart, is gladly reciprocated. Regularly, passers-by would greet us with “Welcome” or “Thank you”. Since the war, tourists are rare. Pre-2011, tourism accounted for 14 per cent of GDP. In the cafés, people were delighted to talk and pleased we had made the effort to visit Syria. One man explained, in broken English, how Damascus on three separate occasions had nearly fallen, but “the people saved it”, confirming JR Bradley’s comment in The Spectator: “there was no popular revolution against Assad...The millions-strong demonstrations in Damascus were pro-regime."

The cafés were also great for people watching, with women dressed with or without hijabs smoking water pipes along with their male friends. One Syrian I met who had lived in Germany for more than 50 years would gladly return home permanently. Only the idea of missing his family in Germany prevents him.

However, the war, almost won, is never far away. In every street, in every town, there are posters and photos of the martyrs, who gave their lives opposing the jihadists. Very many times from Damascus to Aleppo I heard it was backward rural people who succumbed to the poisonous sectarian messages of Saudi Wahhabis and Qatari Muslim Brothers.

A visit to the main Sunni mosque in Damascus underlines the aberration of these sects. Inside the mosque stands a huge shrine to St John the Baptist. Documents had shown his severed head once lay on this spot. Sunni Muslims are not an enemy of Christianity.

Whether the Catholics in Maaloula would agree is debateable. This mountainous village is two-thirds Catholic. They speak Aramaic, the presumed language of Jesus. In early September 2013 Obama’s threats to bomb Syria signalled a jihadi attack on the village. The Sunni villagers did not warn their Catholic neighbours. I stayed a night with a Catholic family. Via Google Translate we chatted. They avidly support President Assad and were disgusted with their Sunni neighbours. These had betrayed them, looted their modest homes, killed three villagers and kidnapped six, who were later murdered.

Kidnapping and looting was a dominant theme everywhere. Armenian towns along the Turkish border, for example, had been systematically looted by jihadists, from taking light bulbs to dismantling an entire power station, bringing it all to Turkey. Maaloula’s parish priest maintained: “People wanted democracy, but no one would have waged a war to achieve it. We had security and a good social life.”

Saudi money corrupted certain Sunnis turning them into fanatics. Syria’s enemies sought to divide on sectarian lines a society with a multitude of religions in order to conquer. Coincidentally, the next day a former Qatari PM admitted in a TV interview that his government, Saudi Arabia, Turkey, and the USA, had coordinated the putsch against Assad’s government, using jihadist foreign forces.

The most haunting meeting we had was with traumatised refugees, Shi'a families from the pro-government towns of Foua and Kafraya. Last April, a deal was struck whereby inhabitants of these two towns under siege by IS would be freed, and in return the same would happen to two jihadist controlled towns. Instead, IS and its White Helmets, detonated a car bomb beside the buses, killing more than 100 people, including 39 children. To add to the anguish, 54 children were kidnapped and are held in Turkey. One child returned after a $100,000 ransom payment. The evil sectarian nature of Saudi Wahhabism was patent.

A visit to two multi-denominational primary schools in Homs – the so-called cradle of the Syrian “revolution” – was equally disturbing. Suicide bombers had targeted these schools – slaughtering 30 children and many parents. In the entrance hall were photos of each child murdered. Here, young girls greeted us, movingly singing in Arabic the 'Ode to Joy' from the final movement of Beethoven’s 9th Symphony: "Alle Menschen werden Brüder/All people are joined in brotherhood". 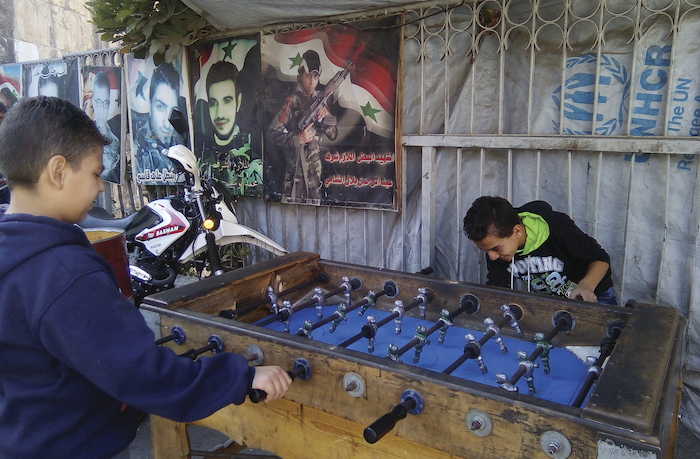 The EU has adopted 'Ode to Joy' as its anthem. How inappropriate considering its stringent sanctions imposed upon Syria, which a leaked 2016 UN memo noted was making it more difficult for foodstuffs, fuel, and healthcare to reach the people. Thus the EU sides with the jihadist conspiracy. This must stop.

It is impossible to relate all my Syrian experiences here: trundling along tarmacked roads, through liberated desert, to Aleppo, seeing yellow Hezbollah flags fluttering over what looked like ancient ring forts; being struck in Aleppo and Homs by the destruction, but realising it can be rebuilt - unlike the mangled human remains.

Beside me on the return flight from Beirut to Frankfurt was a young Syrian chemist, working for a company in Germany. We chatted. Going home, she had observed how accustomed people had become to war. Concerning Assad, she was direct: “Outsiders talk of replacing President Assad, but over the past seven years no realistic alternative has emerged capable of taking his place. He must remain our president.”

Niall Farrell was born in Belfast and has lived in Galway for many years. He is the PRO of the Galway Alliance Against War.