The world has watched in shock, horror, and dismay, as in less than a month, more than 400,000 Rohingya Muslims have fled Rahkine State in Myanmar, in what the United Nations has branded a military operation of ethnic cleansing.

While the burning of villages, the persecution of people, the fleeing of thousands, the allegations of rape and child killings, and the resulting humanitarian crises has unfolded, Myanmar’s state counsellor, foreign minister, and de facto leader Aung San Suu Kyi - a winner of the Nobel Peace Prize - has remained silent, and indifferent, speaking only to dismiss the racist violence as an “iceberg of misinformation”.

On Monday night on Myanmar television, she finally broke that silence, but it was a speech more noticeable for what it did not say, and for its qualifications and denials, than anything else.

However throughout her address, she refused to use the word Rohingya - Myanmar Buddhists consider them illegal refugees, despite their presence in the country for more than three centuries, even longer. She also claimed there were "no armed clashes and there have been no clearance operations” after September 5, and that she was “concerned to hear that numbers of Muslims are fleeing across the border to Bangladesh", adding, "We want to find out why this exodus is happening.”

She should perhaps ask the military, and examine at her own country’s laws, where the Rohingya are denied citizenship and equal opportunities. 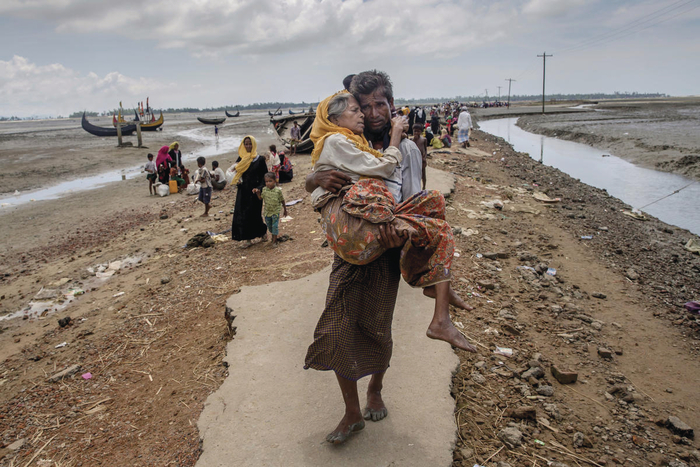 While the latest round of violence was sparked by Rohingya militants killing 12 security officers on August 25, persecution and violence against the Rohingya is a long running reality in Myanmar. They have previously faced state persecution and genocidal attacks in 1978, 1991, and again more recently.

In February 2016, the UN High Commissioner for Human Rights Zeid Ra'ad Al Hussein warned that "the pattern of gross violations of the human rights of the Rohingya suggested a widespread or systematic attack against the community, possibly amounting to crimes against humanity". The UN High Commissioner went a step further this month, calling the actions a "textbook example of ethnic cleansing".

Furthermore, the BBC's Jonathan Head, based in neighbouring Bangladesh, disputed the claim there had been no clearance operations since September 5, pointing out he had seen villages burned after that date. Channel 4 News's Jonathan Miller reported that at least eight more Rohingya villages had been burnt since September 14.

In a recent statement, Médecins Sans Frontières noted how its doctors have been treating gunshot wounds, rape cases, and blast wounds among the arriving refugees. "The stories refugees are telling are of widespread destruction, rape, and violence. Villages have reportedly been burnt down deliberately and there are reports of at least two MSF clinics in Rakhine State which have been burnt down," the statement read.

In her address, Ms Suu Kyi said: “We invite you to join us, to talk to us to discuss with us, to go with us into the troubled areas,” she said. “See for yourself what is happening and think for yourself: what can we do to remove these problems?”

It sounds reasonable, but the reality is that, as late as Tuesday, UN human rights investigators were still demanding “full and unfettered” access to Myanmar to investigate the ongoing crisis, but Ms Suu Kyi’s government has renewed its rejection of any such UN probe. In the past she has repeatedly denounced the UN probe and vowed no cooperation with it.

Aid organisations and journalists who have been let into Rakhine State, have only been allowed do so by when accompanied by the military. As MSF said: “International humanitarian organisations must be granted independent and unfettered access…Having the Myanmar government, who is involved in the conflict, responsible for monitoring and distributing aid risks those who need it most not being able to access assistance.” 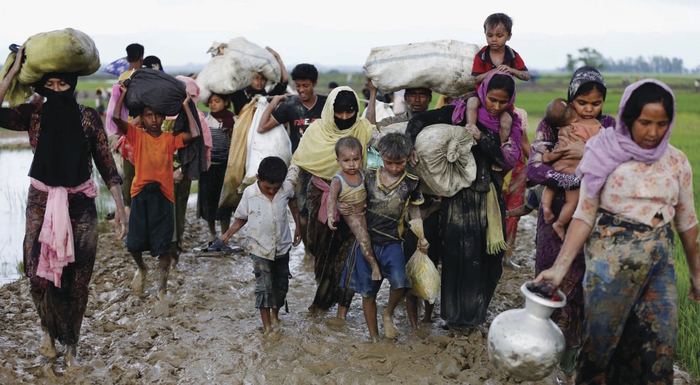 While it must be recognised that the armed forces retain great power in Myanmar, that Ms Suu Kyi does not exercise effective control over them, limiting the scope of her actions, Monday's speech has put the final nail into the coffin of the argument that she was afraid to speak out. It must be remembered that Ms Suu Kyi is, first and foremost, a Myanmar nationalist. As she told the BBC earlier this year: “I don’t think there is ethnic cleansing going on. I think ethnic cleansing is too strong an expression to use for what is happening."

International reaction to Ms Suu Kyi’s statement has been unimpressed. James Gomez, Amnesty International’s director for Southeast Asia, said Ms Suu Kyi and her government were “still burying their heads in the sand over the horrors unfolding in Rakhine. At times, her speech amounted to little more than a mix of untruths and victim blaming”. Locally, Labour city councillor Niall McNelis said her speech was “very much in denial of large scale problem”.

What can Galway do?

So how is this relevant to Galway? All politics is local. The crisis in Rahkine State cannot be dismissed as “a quarrel in a far away country between people of whom we know nothing”, especially as in 2005, Ms Suu Kyi was awarded the Freedom of Galway City and in 2010 it was proposed at a council meeting she be invited to Galway to personally receive that honour.

One of the most distressing aspects is how, Ms Suu Kyi, a Nobel Peace Prize winner, feted for more than 25 years in the West as an icon of democracy and freedom, can ultimately have proved to be so indifferent, so complicit, in the demonisation and destruction of the Rohingya.

Calls have recently started to emerge that she should be stripped of the Nobel Prize she was awarded in 1991. Should Galway now revoke that Freedom of the City status as Dublin is doing? Cllr McNelis says a debate should take place on this matter and he is “encouraging citizens to make contact with elected members on this issue and that if there is support for it, it can be brought before council”.

“Galway has always had an international role in highlighting wrongs and humanitarian disasters," he said. "We have human rights studies in NUIG and many NGOs are supported by citizens who are working in areas where international problems are happening every day. Citizens should make their voices heard if they want honour taken away.”

While stripping Ms Suu Kyi of the Freedom of Galway will not change what is happening in Myanmar, it will be a statement by the city that it is opposed to racism, discrimination, and genocide, and that it will have no association with anyone who would turn a blind eye to, or try to justify, such actions. It would also send out, however faintly, a message of solidarity to the Rohingya. 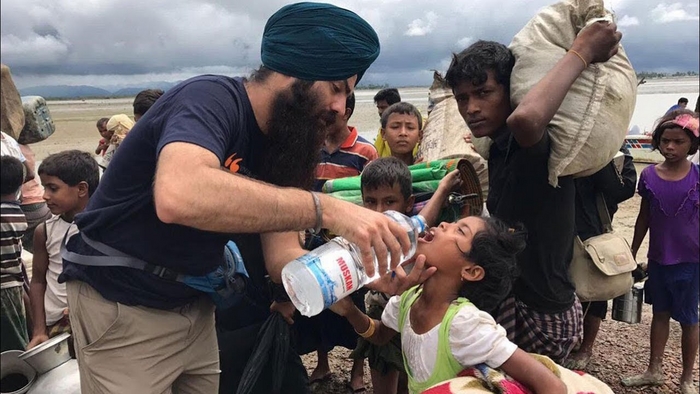 On a more practical level, Galway can help support the Rohingya by donating to Médecins Sans Frontières and supporting its work in Rahkine State.

“Real work needs to be done to help refugees and protect the Rohingya,” said Cllr McNelis. “Médecins Sans Frontières is seeking support for the Rohingya Refugee Emergency appeal. Urgent medical and humanitarian assistance is required. Camps are severely congested and refugees are in urgent need of food and clean drinking water. I'm aware some Galway locals will say we should concentrate on our local problems, but society needs to step up when something like this happens. I believe Galway should step up when we can to assist. That is why I'm asking for support of MFS. Also we should be raising this with Government ministers in Foreign Affairs and Aid programmes.”