Every season that gap seems to get shorter, but for Premier League fans, the wait is almost over.

Tomorrow night, when Arsenal kick off against Leicester City at the Emirates, Friday night football will bring the action back into our lives.

And what a promising season it is set to be, With swathes of TV cash being washed around the 20 Premier League clubs, transfer fees have soared and the values of average players have sky-rocketed.

Every year those coveted Top Four slots mean less and less as the cash differential decreases, but nonetheless, there are now six strong teams trying to squeeze into four places.

Champions Chelsea will have the added distraction this year of having to play more than 55 games, as opposed to the 40 or so they played last season; Pep Guardiola is bolstering his City defence as he tries to make City a title-fighting force again; Mourinho has assembled a team of six-footers at United; Liverpool are ensuring they hang onto Coutinho; and Arsenal are once agains distracted by comings and goings as they prepare for another pivotal season.

Only Tottenham seem happy with their lot, but they are under pressure too as this season they effectively play 38 away games as they move lock, stock, and barrel to Wembley for the season while their new super stadium is under construction.

Preparing to barge their way into that top grouping will be Everton, who are backed with serious money and have made shrewd though not spectacular signings in the close season.

It promises to be a thriller again all the way, but to make sure that you experience all the highs and lows, get your Fantasy Football entry in before kickoff tomorrow evening.

This year, the Galway Advertiser in conjunction with St Anthony’s and Claddagh Credit Union, the Advertiser Tribal Leader league is once again being held and you could be a winner.

An array of cash prizes and a ticket package are on offer for the champion with loads of fun guaranteed with surprise spot prizes along the way.

No doubt last year’s winner Aodhan Glynn will be keen to defend his title.

To make sure you are competing for the Top Four slot yourselves, get entering now. 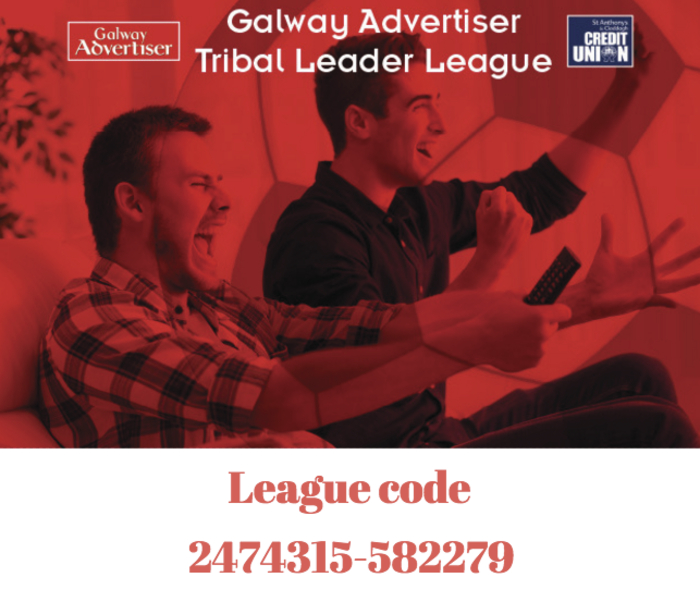