We are confident that we have designed a car that is fast, competitive and Irish so we can take our place at the top table again -Pat McDonagh

Pat McDonagh has announced that Supermac’s will sponsor a Formula 1 team in 2018 in a move to develop the Irish food chains relationship with the motorsport sector. The group of family restaurants is a supporter of the Galway International Rally and is involved with the Formula 1 World Schools Competition that was last held during the US Grand Prix in Texas in October of last year. Supermac’s connection with motorsport includes involvement with the Galway International Rally and as proud sponsor of rally driver, Aaron McHale. Supermac’s has also developed the Supermac’s Racing brand to help develop engineering talent through the motorsport sector.

“Since the time of Joe Kelly Ireland has had a presence on the F1 circuit. Derek Daly, David Kennedy, Tommy Byrne and John Watson played their part to keep the Formula 1 and in recent years Eddie Irvine held the torch for us,” Pat McDonagh said. “Eddie Jordan brought things to a new level with the Jordan Racing team in the 1990’s but since 2005 there has been no recognizable Irish presence on the circuit and we aim to change that in 2018,” he said. “There has been almost a natural progression in the world of motorsport since our involvement as rallying sponsors that we now feel the time is right to pursue sponsorship in one of the highest echelons of the sport and our Supermac’s Racing sponsorship brand has given us the taste for success.” 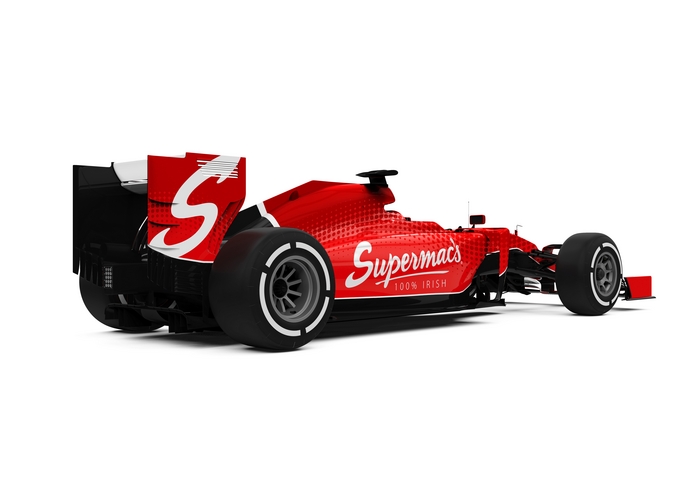 The Supermac’s MD was giving little away when it came to who would be supplying the car but he was confident that they would be ready and competitive for the 1st race of 2018 in Melbourne, Australia. “There is a lot of work to be done to drive this along,” he said. “We have been working behind the scenes with the Formula 1 governing body and with a major Formula 1 brand who are looking to re-enter the scene in 2018 and we are confident that we have designed a car that is fast, competitive and Irish so we can take our place at the top table again.”

“Supermac’s has recently sponsored the Supermac’s Racing team at the World Finals of the F1 Schools Competition in Austin, Texas towards the end of last year. “This is where we got a feel for the power of the Formula 1 project and we began to look at ways of tying in with the races and more specifically with the racing team,” Supermac’s Manging Director, Pat McDonagh said. “It soon became clear that the Formula 1 Circuit was lacking an Irish element and our focus quickly turned to generating a relationship with a car provider with a strong Irish connection. It’s been in the fast lane since then,” he said.

Supermac’s Racing was a partnership between Supermac’s and St. Brigid’s College in Loughrea where the team designed and manufactured a 1/20th scale CO2 powered Formula 1 car capable of travelling at speeds in excess of 120km/h. The car won the award ‘Best Engineered Car’ at the F1 National Finals in the RDS last May. They also won additional awards for their marketing strategy and social media activity.