Insider notes with amusement that the past three years have been catastrophic times for what, in the fantastic place that is the mind of the average Irish Times or Guardian journalist, passes for the 'the political centre'.

First, there was the referendum on Scottish independence which was meant to end in a decisive No vote which would settle the issue for at least a generation. Instead the vote was tighter than anyone expected and, instead of closing the issue, led to the deserved electoral destruction of the Scottish branch of New Labour in the May 2015 British general election.

Then there was the explosion on to the Irish political scene of the anti-water charges movement which had every possible political smear and lie thrown at it by the Fine Gael/Labour/Fianna Fáil supporting media and, despite the wild pro-establishment shrieks of everyone from Alan Kelly to Máiría Cahill to Victoria White, succeeded in defeating the lot of them, and forcing the suspension of the charges.

In the process, that defeat made the political centrists’ medium term agenda of selling off our water infrastructure to Richard Branson, Denis O’Brien, Larry Goodman, or Noelle Campbell-Sharp politically impossible for the moment. Insider thinks the fact that this was achieved, despite Fintan O’Toole – the Padre Pio of sensible leftism in Ireland – writing not one word in support of this most inspiring movement and dutifully paying his own water charges, makes it all the more impressive. 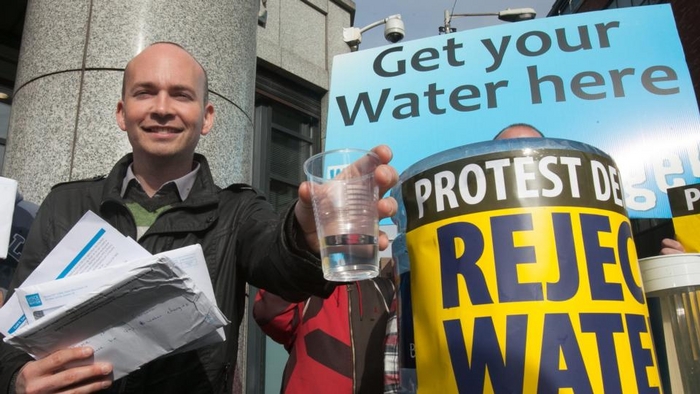 Elsewhere, there has been the political earthquake that swept Jeremy Corbyn to the leadership of the British Labour Party and led many a UK media centrosensibilist, from Polly Toynbee to Nick Cohen, to run shrieking into the night without stopping to put on a dressing gown.

And in the United States, the self-proclaimed democratic socialist Bernie Sanders challenged Hillary Clinton hard for the Democratic presidential nomination, winning 22 primaries and only losing out when the Clintonoid hacks in the Democratic National Committee resorted to methods of a variety which most people – with the absolute exception of the gaggle of upper middle class feminist has-beens who were the back bone of Hillary’s social media support – found almost as distasteful as what Mayor Daly’s Chicago Police Department heavies did to opponents of the Vietnam War at the 1968 Democratic Convention.

Of course it has not all been stories of an insurgent Left challenging the policies of hardly any tax for Apple, Branson, or O’Brien, or the ever present threat of 'the hospital trolley or the street for most of you', which are the main legacy of political centrism in Ireland. Lately, the loudest storm has been the backlash on the right, with the Brexit vote in Britain last June and then, in November, the elevation to the White House of the most ridiculous man in the history of Twitbook.

Again it was not meant to be so, and even Insider was surprised by both of these results. In the book of politics as it was rewritten in the 1990s by William Jefferson Clinton and Anthony Charles Lynton Blair, elections are won from the centre. In practise this means that if you are leader of a supposedly ‘progressive’ party, such as the US Democratic Party or the British Labour Party, you need to impress reactionaries and blockheads by speaking out against beggars - as Blair did when first elected Labour leader – or by signing an execution warrant for a disabled black man – as Clinton did as part of his 1992 election campaign.

This should be at all times accompanied by a sensible economic policy based on pleasuring the CEOs of tax avoiding global corporations as if you were a crack whore in desperate need of a puff on the pipe, rather than the democratically elected leader of a supposedly sovereign nation. It is a process politically obsessed weirdos, such as Insider, call triangulation.

Right wing parties do it too, just from a slightly different angle. When David Cameron’s Conservative dominated government introduced same sex marriage it was based on the calculation that, though it might alienate some of his party’s traditional support, who would in any case come back to support him come election-day, it would impress a few liberal minded individuals in the political middle. And it worked: the artist Tracy Emin subsequently announced that Cameron was a great guy.

There are some liberals who, if a government is prepared to give them a few gay weddings to attend, are prepared to overlook the fact that the same government’s welfare policies are encouraging the poorest of the poor to jump off the nearest motorway bridge. It is a small price to pay when there’s champagne to be drunk and the possibility that Branson might invite you to his island.

According to the laws of political triangulation, Hillary Clinton should have won by a landslide. She did everything right. She offered no actual policies at all to deal with the problems faced by the grubby people in places such as Wisconsin, Michigan, and the rustier parts of Pennsylvania - her party’s traditional base; she defended the North American Free Trade Agreement which, though it has been great for business, has been a disaster for the American working class; and she clearly positioned herself as friend of Wall Street - the people who almost brought down the world economy in 2008, and who will, Insider knows, bring it down entirely next time, if they are let.

As November 8 approached, it still seemed impossible she could lose. However key voters in Wisconsin, Pennsylvania, and Michigan deserted her for Trump’s anti-globalist guff. They knew they were economically doomed if she took the White House. Whereas with Trump, who knows? Anything might happen.

Bernie Sanders would have won had he been the Democratic nominee. His policies spoke precisely to those voters in those places who are not, in the main, raving racists – though many other Trump voters certainly are. And Sanders would have had a huge enthusiastic movement behind him which would have raised turnout of potential anti-Trump voters significantly. Insider firmly believes Clinton’s defeat, by one of the worst candidates in US political history, marks the point where the so-called political centre, with its addiction to the globalised free market, is a luxury in which real progressives can no longer afford to indulge.

The centrists themselves have responded, as the politically finished typically do, by babbling like spoilt two year olds. In Britain, the Liberal Democrats et al want a re-run of the Brexit referendum, or to ignore the result; in the US the corporate Democrats want to run Michelle Obama or Chelsea Clinton against Trump next time out; here in Ireland Stephen Donnelly has joined Fianna Fáil and Katherine Zappone thought the ‘progressive’ thing to do was re-elect Enda Kenny as Taoiseach.

Of course it is possible the centrists will be proved right, and Insider’s predictions will turn out to be the mutterings of someone who just wants to do the sensible centre down. Life would indeed be easier if the answer to world’s problems were Chelsea Clinton or Katherine Zappone. However, Insider suspects that if political progressives do not ditch the Blair/Clinton ideology and come up with an actual economic alternative which, for starters, provides affordable homes for people here in Ireland; begins to repair both the rusting bits of America and the shattered former coal mining areas of the UK; then the next wave of leaders on the right may well, as one friend recently put it to Insider, make Donald Trump look like Adlai Stevenson in comparison.