The 1916 Rising did not end on April 29 when Pádraig Pearse issued the order to surrender. Many are still fighting it, or, to be more accurate, fighting against it, and, as with any war, the first and most prolonged casualty is the truth.

Some members of Establishment Ireland has never been able to stomach the fact the State came into being through force of arms, and that rebellion provided an independent state in five years, whereas constitutional politics and the Home Rule movement had failed across 40 years of effort. Nor has it ever been able to accept the fact the 1916 Rising was led by intellectuals and artists - men and women who loved language and verse, others interested in education and avant garde theatre, and those motivated by aspirations for equality and civil and religious liberty - things citizens of this State have subsequently had to struggle for, and in some cases still struggle for, against the resistance of their 'betters'.

Yes, the violence in the North did make the State question how appropriate it was to celebrate armed rebellion, but it can be argued that this was as much about downgrading and denigrating the actions which started the process leading to Independence, as much as it was about, indeed if not, rather than, the Northern situation itself.

However, the unwillingness of the leadership of the State to own the events that led to its birth allowed the paramilitaries to eventually have it all to themselves for a long time. Yet that probably didn't bother Establishment Ireland. As John Bruton's continual efforts to promote the pro-WWI, pro-Empire, anti-votes for women, anti-trade union Home Rule leader John Redmond attest - as does, bizarrely, Redmond's image currently on a 1916 banner outside College Green in Dublin - Establishment Ireland is not interested in the history of the Rising, its aftermath or impact. It is far more interested in counter-factual history, the navel gazing of 'What if...?'

'What if Home Rule been granted in 1914?' If only it had come to pass, there would be no 1916, no Northern violence. This is impossible to quantify because it never happened. History is about what DID happen, but the desire for what Prof Ronan Fanning correctly calls, "history, not as it was, but as we would like it to be" runs strong in many of the establishment attitudes to 1916.

It would take Insider an entire book to deal with all the myths, inaccuracies, and distortions 1916 has been subjected to over the decades, so let him deal with one of the most common and persistent.

Recently, while reading The Irish Times, Insider came upon this statement in an article by Michael O'Regan regarding the 50th anniversary celebrations of the Rising in 1966: "The triumphalism associated with the ceremonies of a half-century ago undoubtedly contributed to the paramilitary violence which erupted in the North a few years later."

There is no subsequent qualification for, explanation of, or backing up of this point. It is presented as fact, and self-evident fact at that - underlined by the use of the word "undoubtedly", meaning it requires no explanation. Now O'Regan is far from the only commentator to make this point. It is one that has been repeated continually over the years, to the point that it is now accepted, unquestioningly, as part of the '1916 and its legacy' narrative. 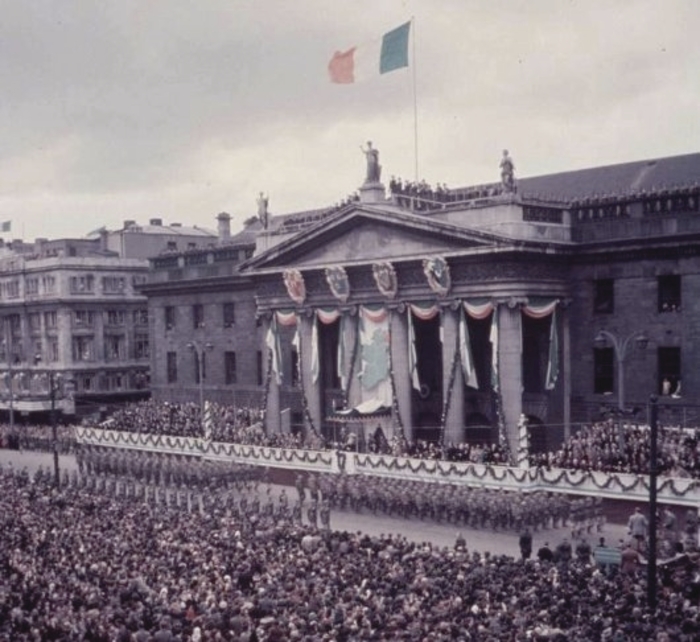 It may comfort Establishment Ireland, but this association of 1916, 1966, and 'The Troubles' is false, and a deep disservice to understanding modern Irish history.

The IRA received a spike in membership in the mid-1950s following arms raids at barracks in England and Northern Ireland, and the early engagements of the Border Campaign, beginning in 1956. This 'derring-do', the imagined excitement and adventure of it all, captured the imagination of a generation of young men living in an Ireland plagued with high unemployment, mass emigration, a depressed economy, and the State's deeply conservative and restrictive political and religious ethos. In short, disadvantage, desperation, and lack of meaningful opportunity, drove young men to pointless violence.

The Border campaign fizzled out due to lack or public support and a strong arm response from Justice Minister Charles Haughey. What is interesting to note is that IRA membership during the campaign reached almost 1,000. Fast forward to December 1966, eight months after the 50th anniversary, and a Garda estimate of IRA membership tallied at 1,039 - hardly an influx, or anything approaching a rise in membership. More revealing is the Garda assertion that of these, only 312 volunteers would carry out an order if told to do so.

The Garda estimate of membership is possibly overstated. It is well known that at the time many volunteers quit in disillusionment at the failure of the Border Campaign. Many more were to go, disturbed by the shift to the Left the new Chief-of-Staff Cathal Goulding was instigating. More revealing again is that in mid-1967, more than a year after the 1916 50th, the then IRA Quartermaster-General, Mick Ryan, taking time off from his job as an insurance salesman, travelled around in his Austin Mini to assess the state of the movement. It revealed that the IRA had 614 volunteers, of whom only 212 were involved with Sinn Féin, and that the reality of the Republican movement was that, in Ryan's words, "there is no movement". Also worth noting is that the movement's newspaper, The United Irishman, had declined considerably in circulation since the late 1950s. Significantly, the 1967 local elections were also a poor one for SF, again indicating no benefit accrued from the 1916 50th.

It is worth noting that in the mid to late 1960s, Goulding was determined to move the IRA away from exclusive reliance on physical force, and for it to engage with street politics, agitation, and social issues. There were some new members who joined Sinn Féin, rather than the IRA, after the 1966 celebrations, but it is known they came because of the move to the Left, and the shift away from guns - the latter fact a cause of concern to older republicans.

What then of the argument that the 1916 50th "undoubtedly contributed to the paramilitary violence which erupted in the North"? If this argument were true we could demonstrably show an increase in IRA membership, but the evidence does not support this. Furthermore, when the IRA split in December 1969, the vast majority of members - what became the Official IRA - in the North and Republic, remained loyal to Goulding, who favoured a 'defence and retaliation' policy, as opposed to the breakaway Provos, who were, at that time, the minority faction, and had an agenda for a more offensive, proactive, campaign of violence. Surely if 1966 had instilled an openness towards the use of political violence in a generation, the split should have favoured the Provos, not the Officials.

None of this should be taken as support from the IRA - Sticky or Provo - but rather an argument against the distortion of history for political ends.Wanting to commemorate 1916, and not being ashamed of it, should never be taken as meaning, or lead to accusations of, support for the IRA. It should further be remembered that membership of both factions of the IRA were a fraction of the overall population, and the vast majority of people then, as now, were horrified by the violence in the North.

There was, though, a significant event in 1966 that can arguably be described as the start of 'The Troubles' - the year saw the re-emergence of the UVF which launched a campaign of sectarian murder (the IRA would not meaningfully enter the fray until August 1969, indeed others argue republicans only went on the offensive in a major way after internment was introduced in August 1971 ).

This, plus Unionist opposition to the demands of Northern Nationalists, not for a United Ireland, but to have the same rights as enjoyed by other citizens of the United Kingdom; the violence meted out by loyalist mobs and the RUC to civil rights demonstrations in late 1968 and early 1969; hardline Unionist political opposition to NI Prime Minister Terence O'Neill's efforts to reform the Northern state - brewing since 1965; the actions and violence of the British Army from 1969; and the loss of control on all sides as the violence escalated, all these "undoubtedly contributed to the paramilitary violence", and not the over-enthusiastic celebrations of a young, weak State lacking self-confidence.

However, as with many other things to do with 1916, these are yet more uncomfortable truths Establishment Ireland would prefer you to forget.