This Sunday, November 29, Oscar’s Seafood Bistro on Dominick Street hosts the launch of chef and proprietor Michael O Meara’s stunning new book, Sea Gastronomy: Fish and Shellfish of the North Atlantic. More than a cookery book, this is an engrossing encyclopaedia of fish and shellfish, which will be equally as valuable to aspiring chefs as to those who are passionate about cooking at home.

Sea Gastronomy boasts 12 chapters, 440 pages, 235 recipes, and detailed information on 120 species of North Atlantic fish and shellfish. This impressive publication is also beautifully illustrated with 375 colour images and is the culmination of O’Meara’s lifelong love of marine life, seafood, cooking, and photography.

Born in Waterford, O’Meara spent much of his childhood in Sligo and his early love of food was nurtured by his mother and grandmother, both of whom were superb cooks while his father, an ANCO manager, spent much time working on lobster and fishing boats.

“It’s funny, people talk about food in Ireland back in the 1970s or whatever and how poor it was, but I think it was the opposite,” he recalls. “All the salmon we had was wild, the meat came from small producers, it was all very regional, the vegetables came from farms and were very localised. The quality of ingredients we always had in this country was spectacular.”

'I can never remember a fish I wasn’t interested in'

O’Meara’s young culinary palette was further broadened and enriched by annual family holidays in France. “We had a Hiace converted into a camper van and we’d go camping there every summer,” he tells me. “When you’d go into a French market in the seventies or eighties you’d see these fish displays that were spectacular, everything was there. As a kid here I would spend all day on the beach collecting cockles, mussels, clams. I was always aware of how many types of seafood were good to eat, I can never remember seeing a fish I wasn’t interested in, I would always wonder what it tasted like. The whole idea of Sea Gastronomy is to try to open up that market because there is so much that isn’t being used, yet it is very usable. We really have to start embracing those other species, the fisheries are an incredibly valuable resource and we are not tapping into them properly.”

When he was 16, Michael enrolled in the professional chef training course at Galway’s RTC (now GMIT ). He subsequently worked at Dromoland Castle and Michelin-starred restaurants in Bordeaux. “At Dromoland we would do the service in French, which was a bit of novelty in County Clare, so that set me up before I went to finish my training in France,” he says. “My conversational French was terrible but I could work quite efficiently in the kitchen!”

It was in May 2000 that Oscar’s Seafood Bistro opened its doors. On the opening night there were only three customers but it has since gone to become one of the city’s most popular and highly-regarded eateries.

“When we started out there was no Twitter, no internet, we hadn’t a penny for advertising, and this part of town wasn’t the most viable area at that time,” Michael notes. “The reason we chose Dominick Street was we counted the pub licences; we were thinking Galway couldn’t really expand in directions like Prospect Hill or College Road, it could really only come back across the bridge and there were these inactive pub licences here. We thought this could be an interesting area, like Quay Street when it was still just a pokey street at the end of Shop Street. So we opened our doors here, it took a few months to get going, and was a bit hairy at times. It was four or five years before we had our first review. It’s great now, the whole area is vibrant, tourists come down here and other restaurants have opened.”

Michael also did a stint working in the private dining room of aviation tycoon Tony Ryan. “Working with him was a good eye opener,” he reveals. “The GPA board had the likes of Nigel Lawson, Tony himself, Garret Fitzgerald, and there was pretty much an unlimited budget for the dining. Ingredients would include wild beluga caviar - it’d be coming in by the kilo. I was just a young chef at the time and didn’t realise most of the people I was saying hello to were multi-millionaires. Tony Ryan himself was a very grounded guy, all he was interested in was hurling. He was big into food as well. He once sent my boss John Burke on a world tour around Hong Kong, Japan, Brazil, just to study their cuisines so that when their company reps came we’d have a good idea of their national dishes. It gave me a great insight into all those cuisines too.” 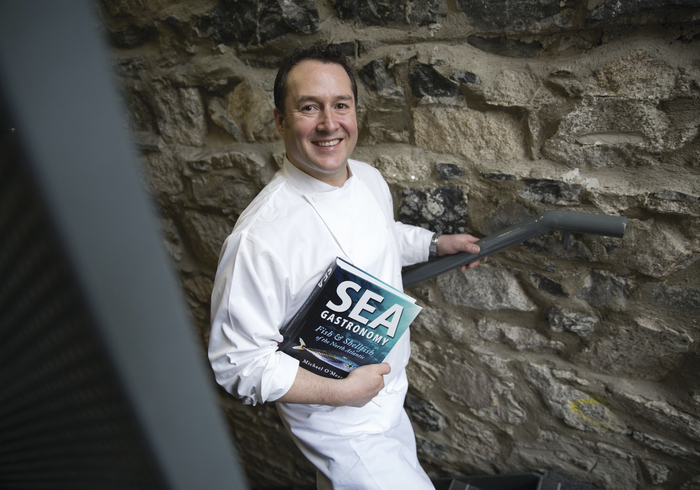 Michael’s huge enthusiasm and deep knowledge of seafood is evident in his conversation, and in Sea Gastronomy he brings all that to bear, not only providing the recipes but also doing all the photographs himself.

“I’ve always been passionate about seafood and nobody had approached a book quite like this before,” he states. “There are a lot of logistics involved in producing a book like Sea Gastronomy, firstly you need a network of people who can get you all the species involved - fishermen, fishmongers, research vessels etc. Then when you get the fish you have to photograph them while they are still pristine, so you might only have a couple of hours to do that; species like red mullet and John Dory start losing their colouration very quickly. I had to learn how to do photography so I bought every book I could and studied, getting the basics. I started contributing to the website Istock Photo, which is now owned by Getty images, and what’s great about Istock is that when they’d reject a photo they’d give you a reason why, so you’d start getting technically better. Once you got to a certain standard you’d be invited to submit to Getty Images. I now have my own little studio with a full lighting system, so everything in the book was photographed with full studio set-ups.”

Sea Gastronomy is published by Artisan House and Michael tells me how the book came together. “I’ve been building up recipes and photographs for a number of years with the idea of doing a book. I contributed a photo to Artisan’s book Celebrating Irish Salmon, which they liked and gave a full page to. We got to know each other and I asked them if they’d be interested in doing a book on seafood and they completely embraced the idea straightaway. We initially envisaged the book being much smaller but it kept growing and growing. At first we thought it would be a 200 page softback but we got up to over 400 pages. When we were getting ready to print it, Gill and Macmillan, who are distributing it, got back to us and said it should be hardback because the content was so strong Vince and Mary from Artisan said they had never seen that happen before. It became a very special publication with all the work we put into it, it was a true labour of love.”

Cookery bookshelves these days are dominated by celebrity TV chefs so a book like Sea Gastronomy is a unique publication. “The publishing industry is completely new to me, I never realised how tough it is for a small publisher in Ireland,” Michael admits. “A lot of the books on the shelves are not Irish at all, big companies like Penguin and Transworld swamp the Irish market. If you’re seen as a celebrity TV chef they’ll be quick to offer you a book deal, so it’s hard to get something that is not celebrity-driven and you’re up against these generic books when trying to publish something different. We wanted Sea Gastronomy to be strong and have an encyclopaedic backbone to it, so we made sure all the information was correct and there is expert input from lots of different people, it was a huge team effort. We also kept the price accessible, normally a hardback book of this size would be €40 or €50 but we insisted on keeping it down to €30.”

Sea Gastronomy is a book that Michael and everyone else involved can take huge pride in and it will surely become a kitchen classic. It is officially launched this Sunday November 29 at 3pm in Oscar’s Bistro.