December will be a hectic month for Tommy Tiernan as he undertakes a seven date tour across all corners of County Galway, performing his new show Out Of The Whirlwind. The show, he says, will be a mixture of “storytelling and improv”, but this is also likely to be the last run of ‘world tour of Galway’ styled shows Tommy will do.

“I’ve been touring Ireland emphatically, especially over the last five years with the ‘world tour of...’. Some counties I’ve played twice and three times. I do feel as if that’s come to an end with me,” Tommy tells me as we sit for the interview on Wednesday morning, before adding with a laugh, “The glamour of Mitchelstown and Ballinasloe has evaporated! But I absolutely feel the thrill of going to east Galway - and I genuinely mean that - and how exotic it feels to me. It’s very easy to mythologise America and performers talk about being on the road in the States, but I’ve always thought our sod is just as interesting.”

Out of the whirlwind, into the unknown

While Tommy is marking the end of one phase of his career, he is excited that another is starting to open up before him. “Creatively I need to put myself into another environment in order to keep me talking,” he says. The environment is improvised comedy - taking to the stage without the safety net of prepared script, relying solely on the quickness of his wits and creativity. Why put himself into such a risky, challenging, position?

“Because it’s better,” he replies. “It’s better for the performer. It’s better for the audience. I understand repetition, but repetition is repetitious [laughs]. Improv is about abandoning reputation. With improv the adventure is in the moment, being totally alive in that present moment as you can be. The improv shows I did in The King’s Head during the summer have had more of that in them than any shows I have ever done.”

Indeed Tommy credits Galway in providing him with the atmosphere and environment into which he can take this plunge.

“The new things I want to do? I want to keep going with improvised work,” he says. “The great thing about living in Galway is that Galway has something between a tolerance and an appetite for experiment. There are places in Galway to try things that are experimental and that eventually turn into architecture. The ideas of a couple of messers ends up as a State funded arts festival. A couple of bored graduates wanting to do acting end up being the Tony Award winning Druid - State funded!

“My improvised work started in The King’s Head and it is one of the very few places where you can put on such a show. The shows were full every time. It’s remarkable that happened. You probably couldn’t do that in Dublin. Galway allows that sort of thing. I think the difference is that the air they breath in Dublin comes off the Irish Sea, whereas the air we breathe in Galway comes off the Atlantic.”

Speaking with Tommy, what comes across most clearly is that creating comedy is something he takes very seriously, and that it is a deeply intellectual process for him, almost like a self-examination.

“It’s deeper than intellect,” he replies. “It’s bone deep. It’s a way of being in the world. It’s instinctive. It’s not like chess or a pastime. It’s a compulsion, and Galway has a lot to do with that. Galway is the place where I started off in 1992, doing shows with The Flying Pigs - I’m 22 years at it now - but I’m not sure where I’ll end up. It’s only when you stop doing a thing that you look back and say ‘Oh, that’s what I was doing’. You don’t realise it at the time. Why do I do it? Some people want to be guards, and you’d have to be grateful for that. Some people want to be poets or journalists, or chefs. It’s like that great country song, ‘All God’s Children Got A Place In The Choir’.”

It is also apparent, both throughout the course of his career and now in his interest to pursue improvisation, that Tommy has never been afraid to follow where the muse takes him, even if that sometimes means finding himself in controversy.

“Anyone who comes to my shows doesn’t call it controversial,” he says. “Controversy mystifies me. I don’t understand it. I find it slightly irritating. It’s not on my agenda to seek controversy. It’s other people’s business, but more often than not, I have to deal with the consequences of controversy and take shelter from it, but controversy has never stopped me.”

While Galway gave Tommy his start and that urge to push himself and his audience into new comedic territory, his love of language and passion for storytelling are the inheritance of his hometown of Navan, County Meath.

“Navan is a very tough town verbally, it’s like Oscar Wilde on sheep speed!” he laughs. “From Navan as far as the border, there is a particular way of talking. People delight in the English language and in twisting and re-shaping it to fit inside an Irish head. In the west of Ireland you don’t have that. There is almost a shyness about talking. I think that comes from people’s grandparents and great-grandparents having Irish and being creative and confident as Gaeilge but hesitant and shy when speaking in English.

“People are adventurous with English in Meath, Cavan, Monaghan, Leitrim, and Louth, think of writers like Patrick Kavanagh, Pat McCabe, Tom McIntyre, or comedians like Ardal O’Hanlon, Dylan Moran, or Kevin McAleer. The way that found expression when I was in secondary school was that people didn’t fight you, they slagged you off and a funny phrase or ability to be witty was more dangerous that your ability to throw a punch. The ability to entertain through conversation was richly esteemed in Navan. There it feels like the word is king.”

Late last month, Tommy’s new DVD Stray Sod, filmed during an open-air performance at The Glebe Gardens Amphitheatre in County Cork, was released, and it just might be his finest yet. It finds Tommy at the top of his game, delivering hilarious, yet highly revealing insights into the Irish psyche through our relationship with Europe, sex, other nationalities, gender, the Irish language, and religion. 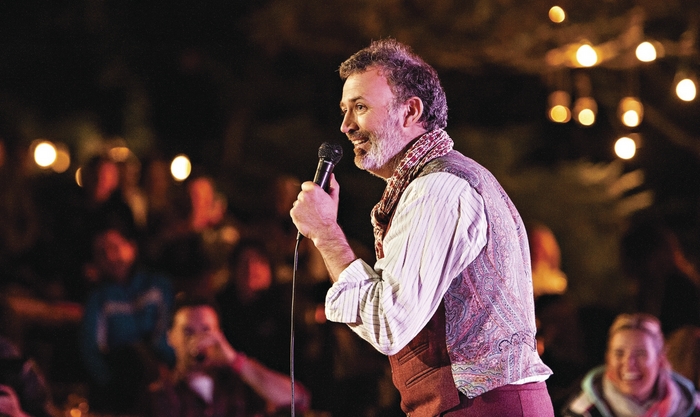 “The idea of the stray sod in Irish myth is of this clump of earth that disorientates you and that if you step on to that spot in a field, you find you cannot leave it,” says Tommy. “Ireland is Europe’s stray sod. When people from abroad come here they find that unless they turn their jackets inside out they won’t be able to get off.”

Stray Sod is rich with comedy highlights, but it is towards the end, during a routine on Catholicism, and particularly Ireland’s relationship with it, which provides the most startling moment in the entire DVD.

Tommy, as part of the routine, chants “A thiarna déan trócaire”, which the crowd reverentially respond to with “A Chriost déan trócaire”. This eventually leads to the audience, which runs to the hundreds, taking over completely, after another cue from Tommy, with a beautiful rendition of ‘Céad Míle Fáilte Romhat a Íosa’. It must be one of the strangest, yet also moving and unexpected, moments in Irish comedy.

“There was something revolutionary about it,” reflects Tommy. “It’s like being religious without having anything to do with religion. There was no priest, no church, no sacraments, no orthodoxy, no allegiance to anything. People were just singing a hymn in Irish and it was normal, natural, ecstatic. There is something in that.

“It’s like the Catholic church is a car and it says that you can only get from A to B, if B is where you want to go, in their car. I guess that hymn in a field in County Cork is people saying We’re car-less, but still moving at great speed down the road towards B. There was a dangerous euphoria in it and a delightful one as well.”