He grew up loving outdoor pursuits and the natural world, despite living close to the world’s largest car manufacturing plant. He has lived in Ireland most his life, but his interest in the country was stimulated in part through British Army radio.

There has never been anything conventional about artist, graphic designer, and musician Joe Boske, whose iconic posters and surrealistic depictions of the west of Ireland landscape have been collected in a wonderful new book, Joe Boske The Works, published by Letterfrack based company Artisan House.

The Works is a collection of the paintings, posters, album cover designs, illustrations, and logos created over the last 44 years by the German born, Clifden based, artist. It also includes writings by Joe on his childhood as well as poems and reflections; an essay by Máirtín Ó Céidigh; Joe’s Galway Advertiser Proust Questionnaire; and tributes to the man by The Waterboys’ Mike Scott and the late Dermot Healy, among others.

The book received its official launch during the Clifden Arts Festival, where its limited edition version (which included a DVD and Joe’s 1997 album Amara ) sold out. The book receives its Galway city launch in Charlie Byrne’s Bookshop on Saturday December 6 at 3pm. The guest speaker is cartoonist Tom Mathews. So how did the publication come about?

“I know Vincent Murphy and Mary Roddy, who founded Artisan House, for a long time,” Joe tells me during our Tuesday afternoon interview. “I went to their inaugural book launch and while there Vincent got talking to me and asked would I be interested in doing a book? I said ‘Yes please!’, so we did!

“We decided the book would include a cross section of what I do. I do a lot of commercial art and I wasn’t going too be prissy and say ‘I’m an artist!’ and not include it. It’s how people often first come to my work. It was hard tracking everything down for the book. We spent hundreds of hours on it, but it was great fun.”

From Germany to Galway

Joe was born in Vorsfelde, Lower Saxony, in what is now central Germany, but back then was the eastern regions of West Germany, close to the border of the German Democratic Republic.

The fences separating east and west were only a couple of miles from our house,” Joe recalls. “My mum was originally from just across the border. She and her family escaped to the West in 1947, trekking through woodlands and snow. They finally got across by bribing a couple of Russian border guards with hootch and potatoes. Where my mum came from was two villages divided by a river, on one side was West Germany, on the other the DDR. There was a big barrier in the middle of the bridge across the river. I recall being brought there by my mum and she looking across the river with tears in her eyes at the ‘old home’.”

Despite the political situation Germany found itself in, the Boske household was a happy one where creativity and a love of the outdoors was actively encouraged.

“There was encouragement to draw and do anything creative, including from my mum who was an artist,” says Joe. “The encouragement was not in any overt way you would notice, it was just the general atmosphere at home, it was a positive atmosphere to visually express myself.”

Vorsfelde was eventually absorbed by Wolfsburg, the city which is home to the Volkswagen manufacturing plant. “Urban sprawl came and we were amalgamated,” says Joe. “You eventually get sick of the sight of Volkswagens, our family preferred the great outdoors, going cycling and canoeing. It gave me a great love of nature and country areas, and that definitely played a big role in my art.”

Further inspiration for Joe’s artistic interests came during his teenage years via his discovery of Surrealists like René Magritte, Salvador Dalí, HR Giger, and the German artist Franz Radziwill. “My parents met Radziwill,” says Joe, “about a year before he died. He was living by the sea in north-west Germany. They called to his house, got a book signed. A nice man, but a strange man.”

It was also in his teens that Joe discovered Ireland. “It was an interesting time in Germany, there was a lot of artistic stuff going on. There were rock bands like Amon Düül, very experimental, and musicians like Klaus Renft in East Germany, who I later got to know. But when I was about 17, 18, I used to live in the library and discovered a couple of books about Ireland, and thought, ‘That’s a place I’d like to visit.’ I also used to tune into the British Forces Broadcasting Service, to improve my English. They used to play a lot of folk music, mostly Irish and Scottish. After hearing that I definitely decided I wanted to visit. When I came I liked the ‘lay of the land’. I liked the look of it too.”

That was in 1969 and Joe has been here ever since. For more than 35 years, Joe has become one of the major figures in the Galway arts scene, and was involved, along with Ollie Jennings, Ted Turton, and Mary Coughlan, in getting the Galway Arts Festival up and running in 1978.

“There’s a photo in Joe Boske The Works of that first arts festival committee,” he says. “I remember Ollie called us all up to his house, saying he wanted a photo of the committee. How did I get involved? I came to Galway in 1977. I was doing graphic design and illustration for In Dublin magazine and I got a call from Ciaran McGinley who was starting up a similar styled publication called In The West. I would come down and do stuff for it. The magazine folded after a while - we were doing it for ham sandwiches, tea, and no money and you can’t live on that - but I decided to stay in Galway having got a couple of jobs. I met Ollie then. Galway is small. There were only a few pubs where you’d meet people. You’d run into each other eventually.” 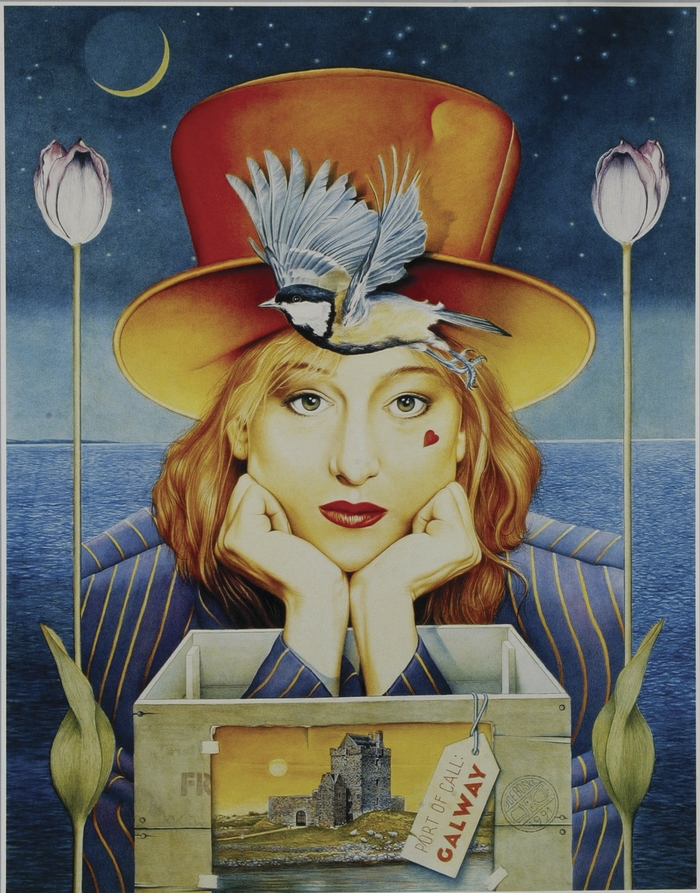 It was through the Galway Arts Festival that Joe established his iconic position with Galway art, designing the unforgettable posters for the 1984, 1985, 1986, 1990, 1991 (pictured above ), and 1992 festivals (many of which are included in Joe Boske The Works ). However with digital media, is the poster still a viable form?

“Images are disseminated differently now,” says Joe, “but printing techniques have improved enormously from when I started doing posters. I think there will always be a market for quality posters. I know we are inundated with visuals, but people always want pictures to put on their walls. That much won’t change.”

Joe Boske The Works is a wonderful collection of Joe’s art, showcasing his detailed, surrealist style, uilt around a personal iconography that is distinctly and unambiguously Irish, without ever lapsing into clichéd images about the country.

“I borrow from my surroundings, create fantasy landscapes from my head, and reassemble them,” he says. “I use watercolour, colour pencil, and gauche. I built up a series of washes on the paper or canvas, mostly flesh tones, then begin work on the drawing. I like the material process of drawing. With drawing you can control things, and build on a work bit by bit. After that I add in more layers of watercolour, darker tones, this time. I build things up in layers.”

Fish and fowl make recurrent appearances in his work, particularly the motif of the eagle’s head within an egg-shaped form. “I like the look of birds and fish. I like the taste of them too!” says Joe, with a mischievous smile. “Some ideas I like to come back to and explore from a different angle. I remember going fishing with a friend of mine and we caught sole and ray and pike and they were fascinating creatures. I just find them interesting looking.”

Despite Joe Boske The Works being just out, Joe is already at work on a number of new ideas. “I’m doing another book on a series of drawings I’m working on at the moment and separately from that I’m working on another book that has lots of daft writings, poems, mad articles, limericks, and quirky quotes.”