Anti-water tax groups from across Galway city and county have united into a new association, Galway Unites Against Water Charges, which will hold a major protest in the city this weekend.

The group, which is made up of We Won’t Pay, Galway Against Water Charges, Right2Water Galway, Galway Lockout, East Galway Says No to Water Charges, and Glor na Tuaithe (Rural Voice ), will hold its protest at the Spanish Arch at 1pm, this Saturday. The protest is a prelude to the national demonstration at the Dáil on December 10.

In spite of the Government’s climbdown on water charges - which saw original estimates of €278 a year for a two adult household drop to a total of €160, which is also capped until 2018 - anti-water tax campaigners say the battle is not over.

“The Government and its water charges have been dealt a major blow,” a spokesperson for Galway Unites Against Water Charges said. “It is up to everyone to come out and protest, refuse to pay, and finish these charges off once and for all.” 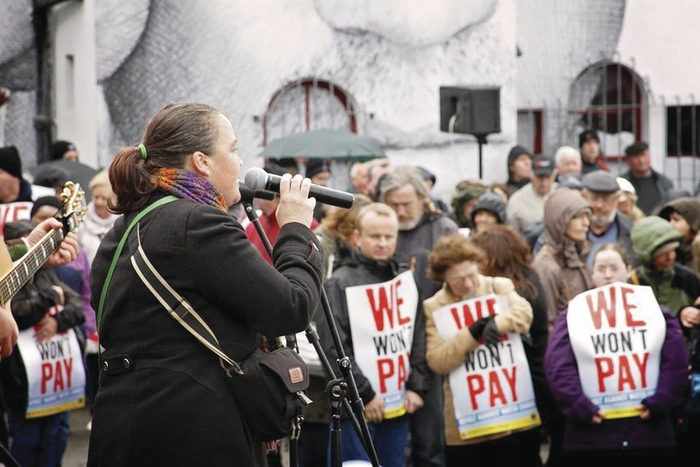 Last week Sinn Féin city councillor Máiréad Farrell described the capped fees as a “temporary con-job measure” until the installation of water meters which will see “the cost of water spiral”, while Independent county councillor James Charity said “the entire water taxes issue” reveals the political establishment is “completely out of touch with its citizens”.

GUAWC shares that point of view, arguing that capped fees are the “thin end of the wedge”.

“The Government is clearly looking to get the charges established any way it can,” the spokesperson warned. “Over time it will implement the full range of costs, meters, and privatisation that people have rebelled against in recent weeks.”

The Fine Gael-Labour administration has begun to claim that the protests are a mix of ‘those who won’t pay’ and ‘those who will pay provided they get clarity on the issue’ - clarity the Government believes it has now spelt out on the issue. GUAWC contends this.

“The Government has missed one of the main points of the protests, which was never about free water,” said the spokesperson. “The fight against water charges has nothing to do with people wanting something for nothing. People in this country already pay for water through central taxation.”

The GUAWC spokesperson says the core issue is about how water is paid for and where the burden is placed. “Low and middle income people have born the brunt of the past six years of austerity and are simply not willing to take another hit, water charges are the final straw, the people have risen and will not settle for a few crumbs from the FG and Labour table.”

Galway East Says No To Water Charges will holding a public meeting in Kinsella’s Bar, Main Street, Loughrea, on Tuesday December 2 at 8pm.