The strong ties that exist between Galway and Lorient in France were remembered and reinforced at the weekend during an official visit by President Michael D Higgins to the Festival Interceltique de Lorient.

Accompanied by his wife Sabina, President Higgins arrived in Lorient last Friday to enjoy all that the festival had to offer before departing for Belgium on Sunday for two World War I commemoration ceremonies at Liege and Mons. On arrival at Lann-Bihoué Airport, Lorient, President Higgins was met by sous préfet of Lorient, Mr Jean-Francis Treffel, and the Ambassador of Ireland to France, Rory Montgomery.

During the visit the President, who held the position of Mayor of Galway on two occasions more than 30 years ago, officially opened an exhibition of Galway based artists. Current Galway City Mayor Donal Lyons was also in attendance at the Galerie de Faouëdic for the Galway, Doorway to Connaught exhibition.

The exhibition was organised by the Galway City Council as Galway’s contribution to the 2014 Festival Interceltique de Lorient which runs until August 10. It features the work of 24 artists including well-known names Brian Bourke, Leonie King, and Siobhan Piercy, as well as artists with a growing reputation such as Jennifer Cunningham and Louise Manifold.

While officially opening the exhibition on Saturday, guest of honour President Higgins said it was “of personal significance that the Festival Interceltique, the Galerie du Faouëdic, and my old friend James Harrold of Galway City Council have come together to exhibit a selection of works of art emanating from the place I call home, Gaillimh – a place that has never ceased to inform and inspire my outlook on the world. So today I am delighted to see Galway being brought home to the people of Lorient, and to the many visitors to this festival, through the creations of some of our talented artists.”

Commending the work exhibited President Higgins said they “bring new forms and images to the abundant ties that exist between Galway and Lorient”. Galway and Lorient have been twinned since 1975 and Galway City Council is currently working on plans to mark the 40th anniversary of the twinning next year. Further highlighting the strength of these ties, President Higgins said that “although the two cities have distinct histories, the inhabitants of Galway and Lorient have been able to draw on the commonalities they discern in their respective pasts to build a warm community of twinning, rich with friendships and mutual curiosity”, and that today “both municipalities chose to give centrality to the arts and to culture, and the two cities are now internationally renowned for their respective summer festivals.” 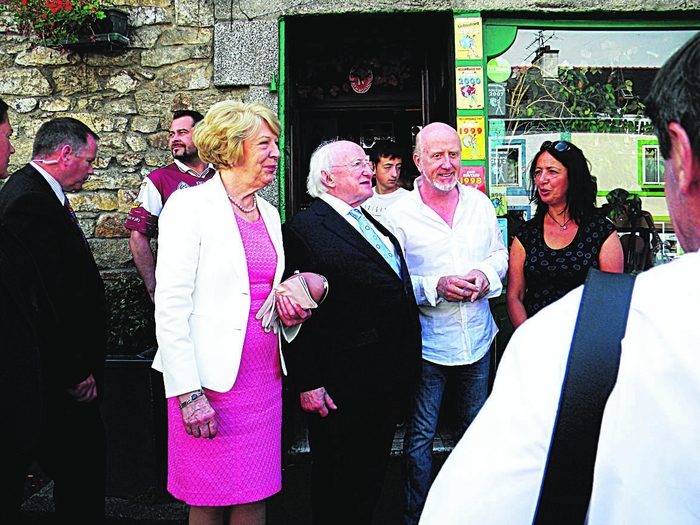 To top off his visit to the festival, on Sunday President Higgins and Sabina paid a visit to the Galway Inn run by Padraig Larkin, a native of Whitestrand Park since 1988. Speaking to the Galway Advertiser, Mr Larkin said that as the only Irish public house in Lorient it was often used as a sort of embassy. In fact, it was the Irish embassy in France that contacted Mr Larkin requesting to use the Galway Inn as the last port of call for President Higgins and Mrs Higgins before they departed for Belgium.

“They were here for about an hour and met with representatives of Gaelic Football clubs from this corner of Europe and were treated to Breton crepes and the best of Irish music. It’s a little reminder of Galway’s links with Lorient,” said Mr Larkin, who added that some 700,000 visitors attend the 10 day long Festival Interceltique.

During his visit President Higgins also attended a gala concert in the Grand Théâtre where the Liam O’Flynn Quartet paid homage to Seamus Heaney, and the Grande Parade des Nations Celtes and reception at the Stade du Moustoir. On Monday, the President attended events to mark the 100th anniversary of World War I, hosted by Belgium in Liège. Later that evening, President Higgins and Mrs Higgins attended the World War I Commemorative Service hosted by the United Kingdom at St Symphorien Military Cemetary in Mons where 513 soldiers from Britain, Ireland, Canada, Belgium, and Germany are buried.