The Road to Riverdance spans from Whelan's childhood through to the 1994 Eurovision, an event which completely changed the course of Irish dancing on an international stage.

Explaining where the desire to note his memoirs came from, Whelan said, "I had written a bit over the years and when I was invited to speak at events, I would write anecdotes. My wife, Denise, said 'you should write your whole story for nothing else but for your family'."

When the pandemic restrictions came into place, putting pause to the music industry, it was a prime time for Whelan to share his memories of his life and experiences.

"It gave me an opportunity to do something I had thought of for a long time. If that time had not happened, I would probably still be talking about it. Instead it turned out to be quite an enjoyable project, writing something so that my grandchildren will know what we did.

"For as long as I can remember, music was in my life."

Born in Limerick city, Whelan was the only child of musically-gifted couple, Bill and Irene Whelan. Unsurprisingly, he inherited both his parents talent for music which was a steady companion to him during the first few years of his life.

"I was an only child and there was only my parents and I in our house. My mother was a trained musician who played piano and she could have made a career of it if things were different. My father was a natural musician and he was interested in all types of music, from jazz music, right through to opera and rock and roll. 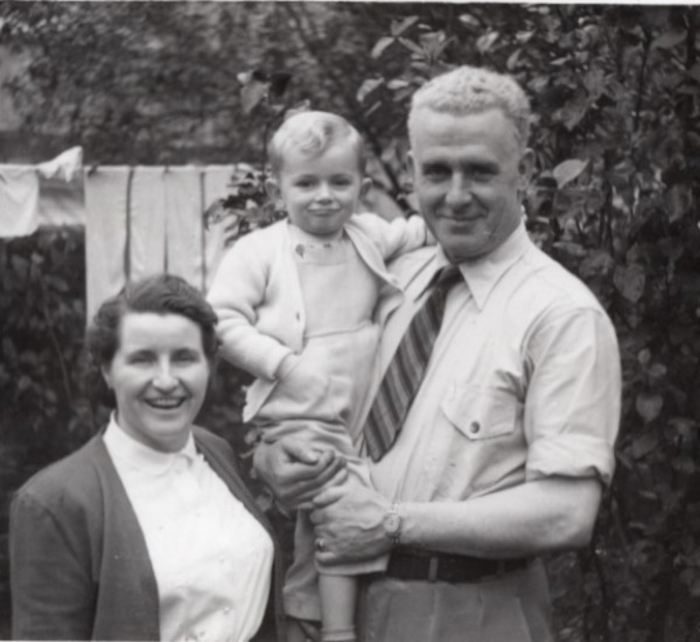 A young Whelan with parents, Dave and Irene.

"My father was born in 1901, it was strange for a man from that era to have an interest in early rock and roll, so I was exposed to an awful lot of music and I loved it. I had a number of music teachers throughout childhood, and a rather less happy relationship with the fiddle. Whenever I put it under my chin I never liked what I heard, but I loved the noise when it came from someone else," Whelan said with a laugh.

With such an emphasis on music within his family and being from Limerick, a place that was influential for the entertainment industry at that time, it was no surprise that Whelan felt the allure.

"For as long as I can remember, until I did start to work in music, it was all about how to get into music and get around it which wasn't always easy, apart from music education, which I did have. I never wanted to be a performing musician, I wanted to be someone who worked in the background, writing, producing and creating."

At 19, Whelan thought he had hit the big time when he composed the main theme for Bloomfield, a football-themed film directed and starring fellow Limerick man, Richard Harris. Whelan's hopes were dashed when Bloomfield was panned internationally by critics.

"I thought I had gotten in there, but it wasn't successful. So I went back to study and started on a long path and the book really shows what a freelancer like me, especially in the 1970s and 1980s had to do to survive. It was eventually a happy ending, but you wouldn't have gotten Riverdance if that stuff hadn't happened before."

With his dreams of a career in music slightly dented, Whelan studied law in University College Dublin but continued to create music while in university and got back on the horse after concluding his degree. He produced a music demo, knocked on doors and made contacts within the industry and shortly joined a production of Joseph & The Amazing Technicolour Dreamcoat working in 'the pit.'

After his stint in 'the pit', Whelan found his opportunity to network led to doors opening and a follow up and promise of another job. He toured with Irish tenor, CT Wilkinson and singer Tony Kenny and spent a lot of time "out on the road" and in theatres, before gradually his name and work spread across the industry.

He joined Irish folk band Planxty in 1979 as a keyboard player and composed Timedance with Dónal Lunny which featured in the interval of the 1981 Eurovision Song Contest, produced U2's album, Lamb released in 1984 and worked with a multitude of well known Irish performers and bands during the 1980s.

"Gradually my work spread out to where I could actually manage what I like to do, arranging music and working with musicians in the studio," said Whelan. 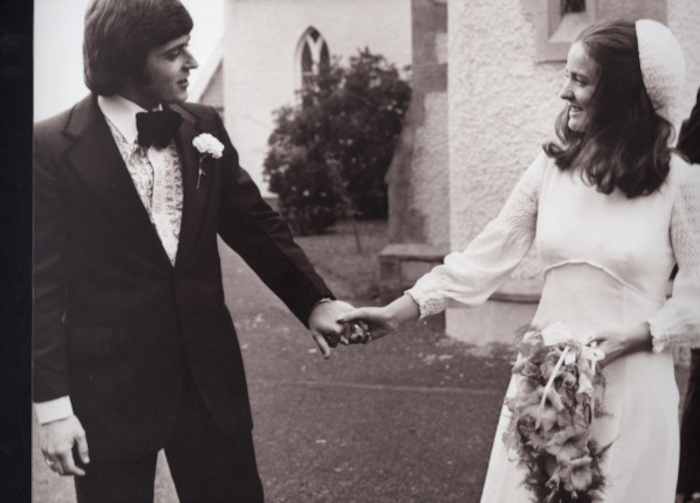 Whelan with wife, Denise, on their wedding day.

Despite the networking and now established reputation, Whelan found that in order to earn his crust, he had to delay his desires to focus on songwriting during that time and instead poured his creativity into some of the most well known Irish music from that era.

"Songwriting was then put to one side because it wasn't making money, this then pulled me into quite a few years of playing and more producing. My first really big break was when I produced and arranged What's Another Year by Johnny Logan. That took off massively, and was my first time getting a number one in the British charts as a producer and really cemented that I didn't want to be in front, I wanted to be in the background."

What's Another Year went on to win the Eurovision in Ireland's second ever victory in the competition, beginning the winning streak for Irish artists and producers at the competition. Teaming up with Logan once again with Hold Me Now, a song which has remained on party playlists across the country, it won the 1987 Eurovision Contest.

Whelan has during the course of his career produced and composed seven Eurovision winners, including Eimear Quinn's The Voice. After two extensive stints in The Abbey Theatre and The Yeats festival, where he wrote 15 songs based on Yeats' plays, it was then that Whelan was reminded of his passion for writing music and realised that he "wasn't doing enough of it."

"I decided I was only going to write, which was mad at the time but I was right."

Whelan composed The Seville Suite in 1992 and The Spirit of Mayo in 1993, both pieces garnered were critically acclaimed and from them came a chance to write the centrepiece in Eurovision, a piece entitled Riverdance for the 1994 show. That centrepiece would go on to change the course of Irish dancing, and would become its own theatrical show which has visited over 450 venues across the earth and has been seen by over 25 million people.

For such a successful figure in Irish music, Whelan is a naturally humble man. He makes jokes about how his initial dream of being a working writer and producer were a pipe dream and regales the story of when he met his now wife Denise's grandmother for the first time, when queried what he did for a living, and learning Whelan played the piano, Denise's grandmother humphed replying "sure what good is that?".

For Whelan, who now spends his time at home in Connemara, the emphasis is on family and working and sharing his lifetime of knowledge with upcoming young musicians, sharing his hard learned lessons to avoid future heartbreak.

"There's one session all young musicians should know, you don't do anything until your terms and conditions are agreed. There was a phrase in our house, 'eaten bread is soon forgotten' and it is true."

The Road to Riverdance was released on October 20, and is available in a multitude of shops, including Kenny's Bookshop, you can purchase online at www.kennys.ie 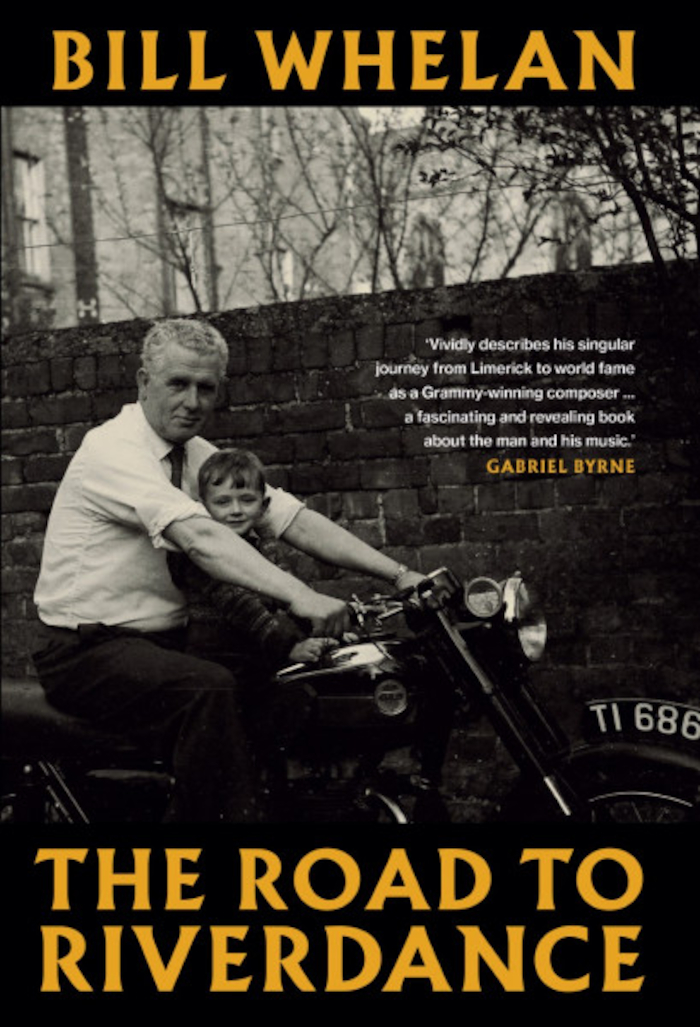