Champagne was popped and joyous tears were flowing in Moycullen and Furbo villages last night to celebrate Galway's two Olympic medallists who were part of the never-say-die women's coxless fours team that had the nation on the edge of its seat early on Wednesday morning.

Silver medallists at the Europeans, this crew of Keogh, Eimear Lambe, Murtagh and Emily Hegarty has continued to grow in stature. Having booked their place straight into yesterday's final when they finished just 0.2 of a second behind red-hot favourites and eventual winners Australia, they already had created history as the first Irish women's heavyweight rowers to make an Olympic final. And, tipped for a medal after a superb heat, they delivered.

It certainly was not easy. Drawn in lane two, they fell behind leaders and eventual winners Australia early on. And a medal looked unlikely when they dropped to fifth by half way. However this Irish crew dug deep, and in the last 100 metres, having left the Chinese behind, they eased past Britain to become Ireland's first Olympic medal winners in Tokyo - winners Australia setting a new record.

"We definitely didn't make it easy, " said Galway's Fiona Murtagh. "But Eimear made the call, and we backed ourselves and just went for it," she said, while Keogh, knowing Ireland were slipping back, said in the last kilometre "we just had to go for it".

"It was a bit touch and go. Throughout the race I was like 'we're coming fourth, fifth... . I thought 'Oh God, I knew we were slipping back, but we said to ourselves, if this happens, 'we'll go early'," and Emer Lambe acknowledged the crew's fitness levels - "We are a very aerobic crew so the second kilometre would usually be our strongest point, so even though we were down, we knew to back ourselves." 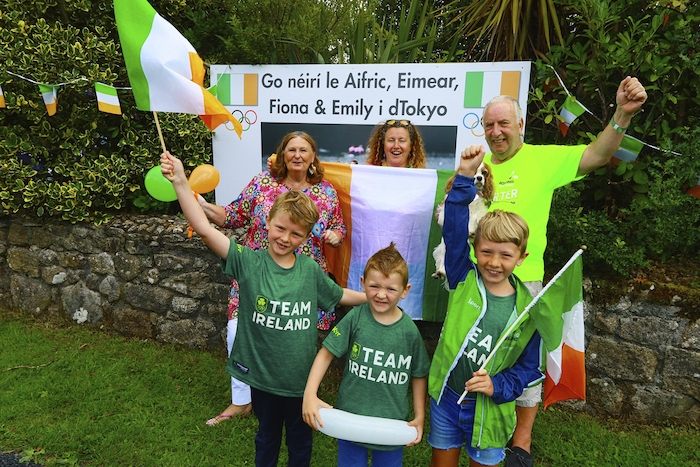 Proud parents of Aifric Keogh, Susan and Jim Keogh along with their daughter Susan and her sons Osgur, Jacob, Isaac and Phoebe the dog celebrate the success of Afric and the Irish Rowing team at the Tokyo Olympics early on Wednesday morning. Photo:-Mike Shaughnessy

Home in Galway, Covid may have stymied both the Murtagh and Keogh families from attending this year's Olympics, but it did not stop the celebrations.

Helped by their local communities, the spirit of the games is well and truly alive with bunting, signs, and Olympic flags flying high in Moycullen and Furbo villages.

The Murtagh family in Gurtahalla, Moycullen counted down the hours to the event, "super excited" and also very emotional having their daughter and sister reach an Olympic final.

Mum Marguerite and dad Noel, a well-known former rugby player with Galwegians - were joined by siblings Padraic, Lorraine, and twin brother Alan to watch the nail-biting event in the early hours.

The former Taylor's Hill student is not only Moycullen's first Olympian, but now also its first medal winner, and she can thank her twin brother Alan who encouraged Fiona to get out on the water with Galway Rowing Club, as did current partner Fionnan McQuillan Toland, who used to row with the Bish.

Staying up late to watch the event was no problem for the family, well used to early starts for rowing events.

"We're used to getting up at ungodly hours," says Marguerite. "For year's we've been getting up at 5am to be on the water for 6am before they went to school. There were four rowers from Moycullen, Meabh O'Brien, Sara Caufield and Ruth Cummins, we would all take turns to drive them into Galway Rowing Club before going to school at Taylor's Hill."

A duck to water 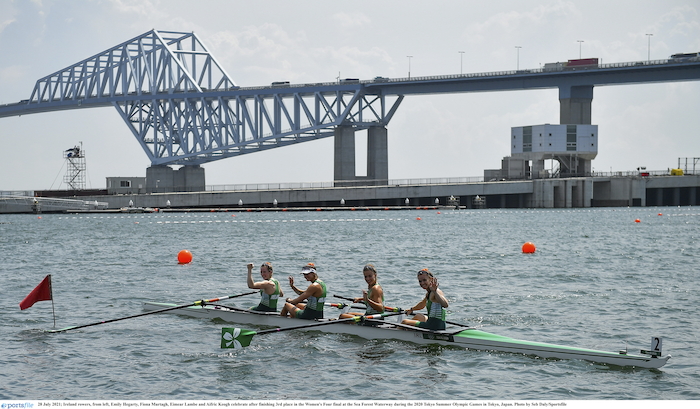 Fiona, who turned 26 in Italy before heading to the games, "took to rowing like a duck to water". "She played GAA and hockey and she had the speed of a runner, but she took to rowing," says Marguerite. "She just loved it, enjoyed early mornings on the lake."

On the back of wins at Home Internationals and Junior Worlds, Fiona was awarded a scholarship for Fordham University in New York as an 18 years old, and success continued. After her return from the USA, she gave up her job in NUIG to join Rowing Ireland and "never looked back".

Across the hill in Furbo, Aifric's parents Jim and Susan were home, their daughter Ciara not far away with her young family, and brother Conor in Dublin. The couple are well used to regattas, having travelled extensively with their daughter, but missing this particulary event was a blow, having planned a family holiday in Japan at the same time.

"It is frustrating not to go to Japan. Certainly we would have wanted to be there and we had planned to make a family holiday of it. Obviously we have been to a number of regattas and this is the pinnacle of them all."

The Olympics had never been part of his dream for Aifric when she took the water, first at the Jes and then with NUI Galway, before she made to move to UCC to further her studies and rowing career.

"As a parent you want your kids to be happy, and if they are into sport and putting in the effort, you want them to get a reward. The Olympics are the top reward, but as long as they are getting satisfaction, it is more important." 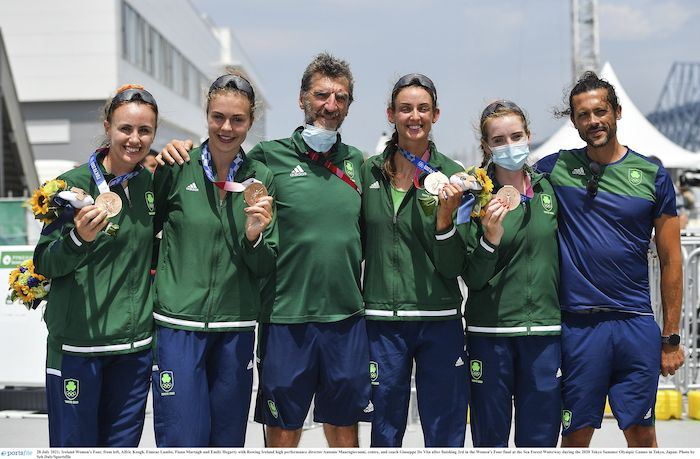 Jim, who enjoyed an "appreciation of the sport" having rowed with Limerick Boat Club, has spent many years as Aifric's chauffeur, starting when she was 13 at the Jes and had to be on the water at 8am, while mum Susan's duty was to "keep her healthy."

But it was not until 2019 when the boat did not qualify, that the dream of an Olympic became more focused.

"In 2019 they came 10th. A cross wind had affected the lane draw and there was an objection, but it wasn't held up. That was a disappointment, but it made them more determined to work on the four, and it became an important boat."

The Olympics has been a memorable occasion for the Keogh family with the communities of Furbo and Spiddal getting right behind Aifric. 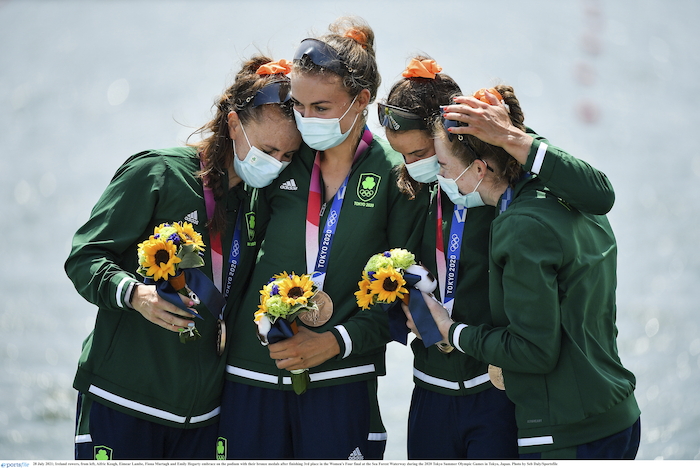 Ireland rowers, from left, Aifric Keogh, Eimear Lambe, Fiona Murtagh and Emily Hegarty embrace on the podium with their bronze medals after finishing 3rd place in the Women's Four final at the Sea Forest Waterway during the 2020 Tokyo Summer Olympic Games in Tokyo, Japan. Photo by Seb Daly/Sportsfile

"It's been like an Olympic village with bunting, flags and bill boards There has been such great support - the first flag up was in her old school in Furbo, and then the hurling club. Every day we drive down and there's a new flag flying."

Jim says the new level of professionalism in Rowing Ireland has cemented the crew's ambitions for success. "They are very focused on their work and this boat seems to be getting better all the time."

His last words to Aifric were to "leave it all on the water". She and the crew certainly did that and reaped a rich reward of which the communities of Moycullen, Bearna, Galway and Ireland take huge delight.

In becoming Galway’s first female rowing Olympians, they follow in the footsteps of Olympic oarsman, Neville Maxwell, who rowed at both Atlanta 1996 and Sydney 2000, and Cormac Folan in Beijing 2008. But they have broken new ground. The first to medal.