Paddy Grant looked out of his bedroom window each day hoping to spot a seagull and a crow. All he usually saw was scaffolding and a blue sky peeping in between the gaps in the large steel frame.

He longed to see these two birds circling overhead because they were his only companions during the 47 days he spend in isolation at University Hospital Galway recovering from Covid-19.

The 74-year-old returned to his home at St John’s Terrace in Henry Street on Sunday afternoon after being discharged with a clean bill of health. He was given a Garda escort and received a hero’s welcome outside his house from the Mayor of Galway City Mike Cubbard in the company of family, friends, neighbours, and local politicians.

The street was decorated with bunting and balloons and people clapped and cheered as the man who had beaten the virus stepped out of his son’s car. Local musicians Greg Cotter and his wife Mary Flanagan performed Paddy’s favourite song, the Bob Dylan classic 'Forever Young'.

Paddy said he felt “very weak” after his Covid battle but was “over the moon” to be home. He said he spent the endless days in isolation in his hospital room watching the birds and willing the hands on the clock that hung over his door, to move faster. Every minute seemed like an hour.

'Being in isolation was the hardest part' 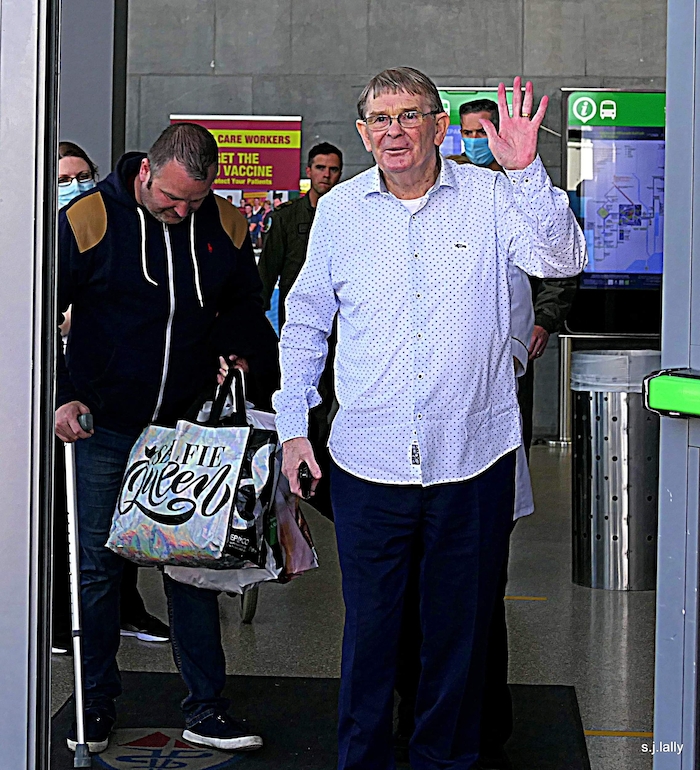 He was unaware for a long time how unwell he had been, that at one stage in his long, uphill battle with the coronavirus that he was given 24 hours to live. Or that when his loving family sent him a video of all his neighbours standing outside their homes waving and wishing him well that they were doing so because they feared they might not see him again.

Being in isolation was the hardest part, it was a very frightening and lonely experience, he said. “It was brutal, I couldn’t handle it. I’m normally happy-go-lucky but I got very depressed. I went so low, I didn’t think I would ever see my family or home again. It was horrible. You live for your family, I knew my lads were worrying about me, that they were in bits, and I was worrying about them. I was very scared, quite a few times I thought I wouldn’t make it. I' don’t know how I came through it. Only God knows, it really was a miracle. I can’t think of anything else.”

'Dad was getting very weak at that stage he could hardly stand, and was developing an awful fever'

"The nurses were fabulous, they were a big help," said Paddy, a widower whose wife Mary died suddenly when he was 51 years old - two of their four sons were still at school at the time. "Some of the nurses would stay that bit longer and talk to me. I heard afterwards that [when he was extremely ill] one nurse used to hold my hand and rub my hair.

"I would urge people to have 100 per cent faith in the hospital staff, especially those in the intensive care unit. They are the real heroes, they do so much good, they work miracles every day. They were always very kind and good to me."

Paddy, one of both West United, Galway United, and St Michael's GAA Club's greatest supporters, first began to feel unwell at the beginning of April. But his symptoms were vague and did not set off any alarm bells. However, his two sons, William and Rodney, who live with him, remained vigilant.

"He had pneumonia after Christmas but had recovered and was fine. However, he began to feel unwell again at the start of April," said William. "He wasn't feeling like himself, he was just tired. But he had no Covid symptoms, he didn't have a temperature, (we used to check it regularly ) cough, or fever. We took him to an out-of-hours GP and he didn't think it was Covid but referred him to hospital. That was April 7. Dad was getting very weak at that stage he could hardly stand, and was developing an awful fever." The doctors initially thought he might have had a urinary tract infection.

"I left him at A&E, we couldn't go in and they kept him in. I got a phone call from the hospital that night saying he had been tested for Covid-19. The next day he was fine again but was told that he had tested positive for the virus. At that stage, he was still able to talk to us. He was on a small bit of oxygen but was able to sit up in bed and chat on the phone."

The following morning Paddy was moved to ICU. "We were told it was a precautionery measure because of his age and would allow them to give him additional care. He was stable then and spoke to us on the phone."

Given 24 hours to live

By the next day his condition had worsened and he was put on a ventilator. "That's how fast he deteriorated," said William. "He picked up again [after a week] and they decided to take him off the ventilator to see if he could breathe on his own. That didn't go to plan and he was put back on it." Eventually, he came off life support but became very ill again. The virus had affected his bowel and Paddy's life was now hanging in the balance.

"He was so sick on the evening of Monday 20th that he was given 24 hours to live. He had developed clots from the Covid that had stopped the blood flow to his bowel." His family were distraught and feared that their dad, who always courageously faced up to difficulties, might not have the strength to do so now.

'They said they hadn't come across a case with all the complications that he had and survived. They couldn't figure it out'

The medical staff worked tirelessly to save his life and fortunately their treatment plan worked. Paddy Grant, who is Cadbury's best customer and whose favourite dinner is bacon and cabbage, was back with a fighting chance. He might have lost three stone but he was not giving up the battle.

They called him 'The Miracle Man'

His family hoped the worst was over at this stage. But there were more challenges to come in the days ahead. "He was developing kidney failure (they thought he might have to go on dialysis ) and liver problems. We thought that night that he might go." But again, William's father defied the odds and battled on. He was scheduled for bowel surgery but at the eleventh hour he responded to treatment and it was cancelled. He finally left the ICU on April 27 and remained in isolation at the hospital until he was discharged on Sunday afternoon.

"They called him the Miracle Man in hospital," said William. "They asked about using his medical records for research, they said they hadn't come across a case with all the complications that he had and survived. They couldn't figure it out.

'Galway, like everywhere else, will need its best characters to lift everyone - you, my friend, are one of these people'

"We can never thank his team enough. They were unbelievable, they really did everything they could. When things were very, very bad his consultants in ICU were so good to us. The ICU staff were unbelievably nice to him and to us. They didn't rush us off the phone, they gave him an iPad to contact us and an email address for the ward. Then they would laminate the emails he received and take them to him. They were very fond of him."

It seemed like the entire city was behind Paddy, offering prayers, encouragement, and an endless supply of food and gifts to lift the spirits of his sons, Rodney, Alan, William, and Dean who spent almost seven weeks terrified that each phone call they received would be the one they never wanted to get.

Mayor Mike Cubbard, the President of Ireland Michael D Higgins, and the leader of Sinn Fein, Mary Lou McDonald, all sent get well wishes to the man who had won the battle against the coronarvirus. Cllr Cubbard praised his fighting spirit and said that when the world gets back to normal "Galway, like everywhere else, will need its best characters to lift everyone - you, my friend, are one of these people". President Higgins shares a passion for soccer, especially Galway United with Paddy.

Now he is home, he is living life with a renewed vigour and an eternal gratitude for those staff in the Shannon Ward in UHG and all the team in ICU who got him home again.