Much has been said over the years about what a positive impact Ireland West Airport has on the region — but now that impact has been quantified, with the revelation that it is feeding hundreds of thousands of visitors to the greater Galway region. On top of this, the airport opens this decade as a key driver of investment, located as it is on a 600-acre strategic development zone that is set to create thousands of jobs in the next ten years.

In this sense, the quaint story of how the airport was conceived moves further back into the mists of a different era — and now it takes its place among the best performing facilities on the island, managed and marketed with incredible efficiency.

And what a future lies in store for the airport. With its new runway laid down by crews working nights only last summer, it is ready to propel IWAK into the next half century as a key driver of business and culture in the region.

With the guts of a million people using it, there are plans to develop the infrastructure further, expanding the aircraft parking area to allow more planes to park simultaneously, and the 600-acre hinterland is set to become a jobcreating mecca for the software, aviation, and hospitality sector.

Not a bad decade's work for the management team and innovative board at the airport. In 2010, only 589,000 passengers used the airport, but that has grown by over 200,000 and it is set for more growth in the coming years when the international aviation market starts to settle down and grow again.

Feeding Galway and other counties

Just four years after the airport commenced its partnership with local authorities in the west, the councils are seeing for themselves what a worthwhile investment it has been, with the airport returning in spades the commitment the councils have shown it.

Now passengers come and go from a modern terminal, with a great sense of the region it serves. The visitor centre at the airport acts as a subliminal signpost to the counties for the hundreds of thousands of users, while the facility is also used by the Council's to promote indigenous businesses to a captive audience.

Some 807,000 passengers used the airport last year — a record amount and there are hopes that in the years ahead, this figure will continue to climb, as more and more routes are added to its already impressive schedule.

Passengers are amazed by the great value that exists on routes out of Ireland West — remember last year, Liverpool fans from Liverpool itself used the airport to get to the Champions League final as it represented greater value than flying from the UK.

Passengers are also travelling from as far afield as Dublin and Westmeath to avail of the great value on short breaks to fantastic locations such as Mallorca, Cologne and Bristol — all destinations that have fulfilled their potential from Ireland West Airport.

IWAK Managing Director Joe Gilmore said that they enter this new decade on the back of a strong performance last year.

"We had another very strong year so we are very pleased with that. The route to Cologne went well and that will run again this year. We also had additional capacity on UK and sun routes.

"On the capital side over €13m was invested in upgrading the facilities at the airport, €11.2 million of this on the runway. This was 75 per cent funded by the Government and the Department of Transport, and that was very welcome and we appreciate the help we get. That project was carried out through the summer by night work and was the biggest capital project here at the airport since its inception.

"We are currently looking at an expansion of the aircraft parking area. At the moment we can park three aircraft at a time. There is a requirement, particularly at busy periods to expand this to include five or six parking spaces. That will be another circa €10m programme," he said.

Mr Gilmore said that the other project that will be coming down the road is an enhancement of the infrastructure at the airport, in particular an upgrade of the electrical power and distribution network across the airport. We hope to receive funding support to complete his project.

"We are part of a 10-year regional airports programme that provides funding for safety and security related projects. We fund all our own commercial - related infrastructure, on terminal and parking and landside works," he said.

Looking to the future, there is considerable potential from the news announced last autumn that the 600- acre landbank around the airport was zoned as a strategic development zone.

Already there are plans for a hotel to be located there as well as businesses in the software and aviation sector.

When fully completed, the proposed development will provide over 95,000 square metres of commercial, business and enterprise space, along with additional facilities for aviation development, conferences and hotel accommodation.

Mayo County Council says the 600-acre SDZ would have the potential to accommodate over 4,000 workers. 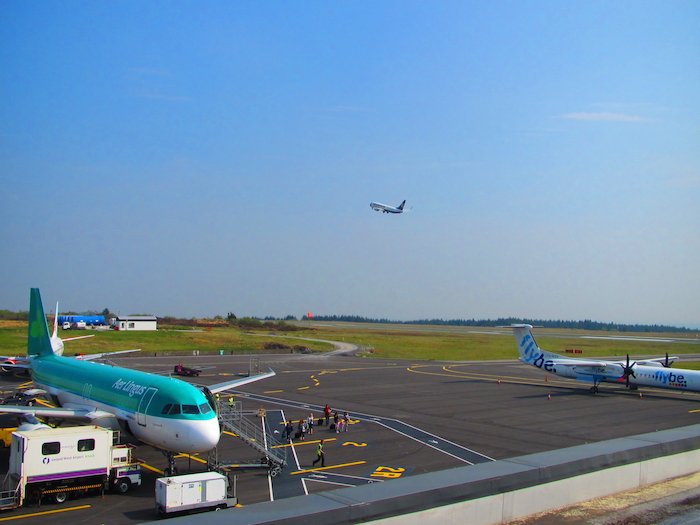 "The Taoiseach when he was here for the opening of the runway gave a commitment that he would bring down the state agencies to look at what can be done to maximise the potential and to create the enabling infrastructure, power, water, etc," said Mr Gilmore. "Hopefully the Government will look at some form of incentivisation to make it attractive for companies to locate here."

With a Strategic Development Zone, planning applications can be fast-tracked when the Government designates lands to be of strategic national importance.

The SDZ at Ireland West Airport would consist of an enterprise campus to cultivate new businesses, with a particular focus on innovative industries and those related to aviation and software.

"There is also an allowance for a solar farm and two hotels. This is a site that has the potential to create 5,000 jobs straight away. ,000 jobs straight away. "We are the only airport in the country with this specific designation. Planning has always been one of the biggest challenges, but this gives us planning certainty," he said.

As Ireland West Airport Knock enters this new decade, it does so in a position of unprecedented strength — by the time 2030 rolls around, it will be a formidable driver of regional investment, located at the heart of one of the biggest development zones in the country, doing what it has done best since it was first opened — bringing people to and from the region, offering opportunities for travel, enhancing the lives of those who live in the six counties around it — a true beacon on a hill.