Instead of celebrating a landmark four decades since their establishment, Galway Simon announced this week that it has never been busier as the ongoing housing crisis eats into its resources.

At an event to mark the 40th birthday of the organisation, CEO Karen Golden revealed that more and more people are turning to them for help. She spoke about the five-fold increase in the number of people in emergency accommodation in the West of Ireland over the last four years, from 91 at the end of 2014 to over 550 in December 2018.

“While these figures are chilling, they do not fully highlight the extent of the crisis as they exclude rough sleepers, couch surfers and others who are involuntarily sharing – the vast majority of those supported by Galway Simon Community are not included in the national emergency accommodation figures,” she said.

“While progress is being made by the Government and Local Authorities, the slow pace of new social housing coming on stream is contributing to the increasing numbers experiencing and at risk of homelessness. This in turn means that more and more people are turning to Galway Simon for support, putting additional pressure on the organisation’s services. We have found it very challenging to work with some of our clients in the last couple of years because in the past, it was easier for us to help people to find a way out of homelessness when there was more accommodation available for them to move on to.

“Unfortunately, because of the housing crisis, that is no longer the case and it is now extremely difficult to move individuals and families out of homelessness. Because of this we are looking to acquire a small number of properties over this year and next which will enable us to support a number of people experiencing homelessness into a more stable environment and independent living”, added Ms Golden.

2018 was extremely challenging according to Galway Simon Community who supported 550 local households last year through their accommodation and homelessness prevention services, more than in any other year since the organisation was founded in 1979. 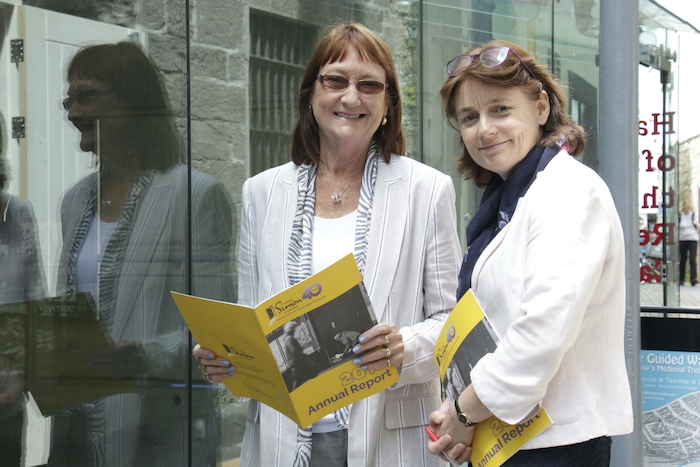 This included 132 families, with 292 children. Marking their 40th anniversary, the charity invited one of the founding members of the organisation, Mary McPartlan and local historian Tom Kenny to take a look back over their 40 years of work in Galway.

Launching Galway Simon’s 2018 Annual Report at an event in the city, Mary McPartlan, well-known local singer and educator, gave an insight into what it was to be involved with the Simon Community around the time it was founded.

“I became involved in a lot of issues around civil rights and human rights at all sorts of levels and of course the Simon Community was central in Galway and had begun the process of caring, and I say that in a very special way, caring for homeless men with alcohol problems at that time, through coming from broken homes, through becoming homeless in London and coming back to Galway”. Mary McPartlan became the Administrator at Galway Simon with responsibility for fundraising, at a time when she says the organisation was in “dire straits”.

She spoke about the lack of awareness around homelessness and the lack of services that were available in Galway in the eighties. “We’re all totally aware of the horror, 35 years later, of homelessness and the health services but back then we were outraged that there weren’t special services for homeless people at that time. The Simon Community in Galway, to me, became the conscience of the people,” she said.

Local historian Tom Kenny spoke about the organisation’s history over the last 40 years, highlighting the differences between the perception of homeless people in the early days and now. ‘Vagabonds’, ‘alcoholics’, ‘down and outs’ and ‘skid row people’ were all terms that were used to describe homeless people according to early reports and “this was the perception at the time”. Tom Kenny’s research into the organisation, including personal accounts from those involved over the years, will be formed into a publication as the charity marks its 40th anniversary and will acknowledge the work of the local community in helping to combat homelessness.