Tomorrow, thousands of people across Ireland will vote for the very first time on the machinations of the Eighth Amendment. I was not born when it was inserted into the Constitution; was too young to vote on referenda in the 1990s in relation to access to abortion information or travelling to the UK; a lot of us were even too young to vote in 2002 when an attempt to restrict abortion access even further was defeated.

Every few years we would hear of women taking cases to the European courts. They all had single letter names. It was studying law which made me most aware of those cases. In 2012, when Savita Halappanavar died, it changed the issue for a lot of young people. Within the space of two years in Galway we formed a vibrant pro choice organisation in the city and in NUI Galway; the Students Union became the first pro-choice SU in the country with a 2:1 mandate out of 3,000 students voting. We were not removed from it any more.

I have been campaigning on various issues already, both on and off campus, but for the past five years the issue of trusting women and their choices has become paramount. We have realised the Eighth Amendment can actually result in the ending of someone's life. You cannot keep quiet about that any more.

'Young men are engaged. With one X on Friday, we can make life that little bit easier for the women of Ireland'

They say young men will not vote; that they are not engaged; and the 'alt-right' and 'incel' (involuntarily celibate ) culture from abroad is affecting young Irish men’s ability to empathise. I do not see that. I have seen a group of lads running across Renmore with stacks of leaflets making sure a thousand houses has one by the end of the night; I’ve seen my 18-year-old housemate risk going into work late so he could run to Mill Street and then to City Hall on the last day of registration; lads skipping training and not going for 'one' after work, and joining a canvassing team instead; men shaking your hand on a night out, not saying anything, a nod at the badge. 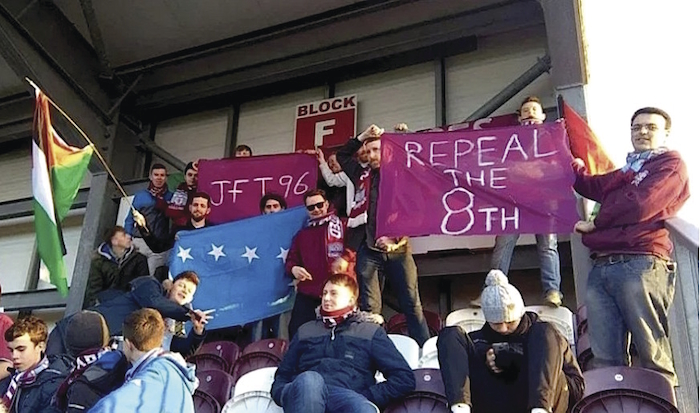 Just two years ago a gang of us held a Repeal The 8th banner at a Galway United match. Young people are engaged, young men are re-engaging. Their Yes is needed and they know that. Like thousands of young men who identify as heterosexual and voted Yes three years ago, we will do it again on Friday. There’s only so much you can ignore about what our female counterparts have to go through before you take a stand. The Belfast rape trial has shocked many men as to the level we casualise sexism and rape culture. With one X on Friday, we can make life that little bit easier for the women of Ireland.

At 31 and a future election candidate for People Before Profit Galway, I obviously have a slightly skewed overview of how young people are engaging with this referendum. However, recent figures of thousands of people registering to vote in the last few weeks tells me I’m not far off. I’m fortunate to have a group of mates across the 18-35 age bracket who tell me what their friends are saying, and how they’re responding, to this whole campaign. A lot of the time it is just a guy wanting a Yes badge but that’s a start. That’s the solidarity with their sisters initiated. That’s the reminder to walk down to that school in that 15 hour window and cast your vote.