Following the killing of more than 60 Palestinians, and 2,700 more wounded, during the 'March of Return' protests in Gaza, along the Israeli border, a Galway councillor has called on the Galway City Council to re-commit to and endorse the Boycott, Divestment and Sanctions movement.

The deaths and injuries came mostly from gunfire by Israeli forces, as Palestinians mark al-Nakbah, ('The disaster' or 'catastrophe' ), when more than 700,000 Palestinians fled or were expelled from their homes, and between 400-600 Palestinian villages were sacked, during the 1948 Arab-Israeli War, which led to the foundation of the state of Israel.

Israel says the protests have been orchestrated by Hamas, and that the actions were taken to protect Israel's borders and its citizens living close to Gaza. Security officials say 24 of the rioters killed on Monday have been identified as Hamas terrorists. Rioters hurled firebombs and flaming tires at soldiers, while some attempted to breach Israel’s security fence along the Israel-Gaza frontier.

However the level of death and injury has shocked the world, and led Rupert Colville, spokesperson for the UN High Commissioner for Human Rights, to condemn "the appalling, deadly violence in Gaza". He added that in the commissioner's view, attempts to cross or damage a fence "do not amount to a threat to life or serious injury and are not sufficient grounds for the use of live ammunition". 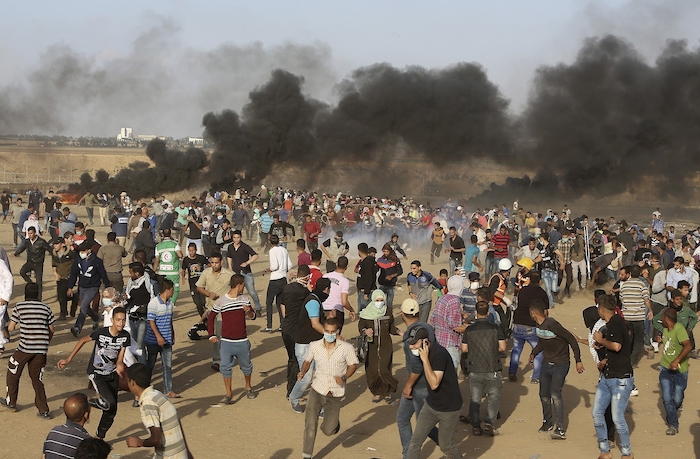 Labour city councillor Billy Cameron, a strong supporter of the Palestinian cause, has submitted a motion to the Galway City Council, which he is seeking to have discussed at the next council meeting.

The motion calls on the council to "fully support and endorse the Palestinian-led Boycott, Divestment and Sanctions movement for freedom, equality and justice and commits itself to discontinue all business contracts it has with Hewlett-Packard, both HP Inc, and Hewlett Packard Enterprise for business and government services, as well as the HP spin-off DXC Technology, as HP and DXC provide and operate much of the technology infrastructure that Israel uses to maintain its system of apartheid and settler colonialism over the Palestinian peopl".

Cllr Cameron said that since its "violent establishment" in 1948, the state of Israel has "denied Palestinians their fundamental rights and has refused to comply with international law". He added that Israel continues to "illegally occupy and colonise" Palestinian land, discriminates against Palestinian citizens of Israel, imposes "an inhumane blockade and siege of Gaza", and denies Palestinian refugees the right to return to their homes.

Speaking to the Galway Advertiser, Cllr Cameron said: "I think it is more important than ever to get this passed. I strongly believe the only way left is like the Dunne Stores workers boycott of South African goods in the 1980s. It all seems very hopeless but these motions can have an effect and I believe that BDS is an effective way for international supporters of Palestine rights to put pressure on the Israeli state."