There was four points in it at the end - but there could have been much more if Dublin hand’t eased off the gas in the final third of the game.

Once, Niall Scully palmed the ball to the back of Rob Hennelly’s net with 46 minutes gone, the outcome of this game was done and dusted.

Jason Doherty and Dean Rock swapped frees in the following five minutes, but that was it on the scoreboard from either side for a very long time.

The next score didn’t arrive until injury time when Conor Loftus slotted over the first of his three injury time frees to add some gloss to the Mayo scorecard, but it was only a thin lick of paint to a flaking wall.

Mayo manager Stephen Rochford said aftewards that there was positives for his team to take from the game - even in defeat: "There are some positives, and a lot of things too for us to work on. There are different objectives in the league, but we did not deliver on the one that we wanted tonight which was to win two points and we did not do that."

"We battled well. We created a really good goal chance after half-time and we didn’t take it and if we had we might have asked Dublin more questions than we did."

WATCH: Full-time highlights as @DubGAAOfficial make it four #AllianzLeagues wins from four with a dominant win over Mayo at MacHale Park. #MatchNightLive pic.twitter.com/nBpKTInsIv

Lee Keegan was a late addition to the Mayo starting 15 and having him back on board will be a vital addition to Mayo’s quest to maintain their status in division one with trips to Kildare and Donegal and home game against Tyrone coming up over the next four weeks.

Having him back was something that Rochford was pleased with and was happy with his performance:"I thought he adapted well in what was his first game in four months. That graph will obviously push up and he has a game, as do all of us, next week against Kildare."

Just like the All Ireland final last September Mayo were playing catch up from inside the opening minute - with Dublin once again hitting them for a goal right from the off.

Paul Mannion was the man who did the damage this time around, barrelling in from the right and firing it high past Robert Hennelly who was making his first meaningful start for Mayo since the 2016 All Ireland final replay, between the same two sides. 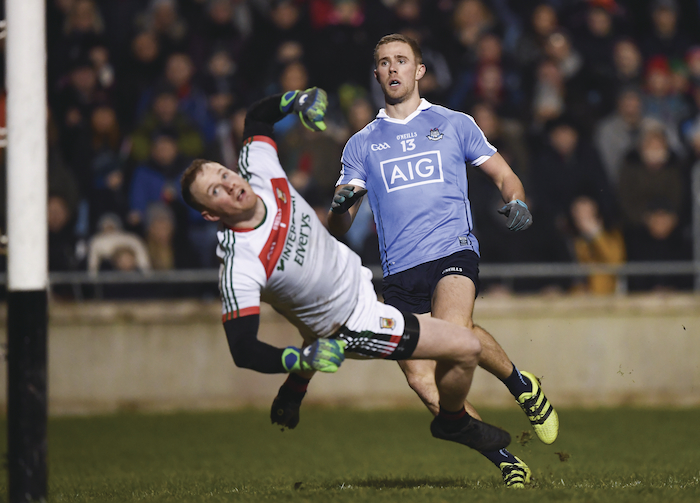 Looking back: Rob Hennelly can only watch the ball fly by him from Paul Mannion's shot in the first half. Photo: Sportsfile

Jason Doherty and Keegan pointed for Mayo either side of a Ciaran Kilkenny point to leave two between the sides with seven minutes gone on the clock.

But Mayo never could get back on terms with Dublin for the rest of the contest once they went in front.

Dean Rock kicked five first half points four of them from frees, with Brian Howard and Mannion adding a point each before the close of hostilities in the opening 35 minutes.

Mayo did keep in touch thanks to scores from Doherty, Andy Moran, Stephen Coen and a brace of points from play from Kevin McLoughlin but the trailed by five at the break on a score of 1-9 to 0-7.

Mayo had a great chance to close the gap right at the start of the second half, when Doherty turned over a Dublin defender and fed Adam Gallagher. The Mayo Gaels man pulled the trigger but his effort flew wide of the post.

Hennelly did cut the gap back to four with a well taken free from beyond the 45m line four minutes later, but Mayo were going to need a major you could feel.

But the three-pointer went the way of the visitors when Niall Scully palmed the ball home on 50 minutes and put Dublin seven clear.

Doherty replied with a free two minutes later, but Mayo’s free taking fell apart not long after that with Doherty missing two and Andy Moran and Hennelly one each over the next ten minutes.

Dean Rock hit the final score in normal time from a free to push the All Ireland champions into a 2-10 to 0-9 lead and that’s the way the scoreboard stayed until injury time, when Loftus tagged on his three scores.

Mayo have been here before and dug themselves out of it, they’ll have to do something similar over the the next three games or it could be division two for them next season.