Despite only scoring a single point in the second half Mayo held off Galway to pick up three vital points in division one of the Ladies National Football League in Salthill on Sunday.

Between them both sides only managed 1-2 over the final 30 minutes of play which was saw both sides pick up a couple of yellow cards, but that will matter little to Mayo as they picked up their second league win of the season.

Cathriona Cormican’s goal ten minutes from time cut the gap back to just three points and swung the momentum in Galway’s direction as Mayo played the closing stages of the game with just 14 players after captain Sarah Tierney was shown a yellow card less than a minute later.

But neither side was able to add a score before the end with Mayo goalkeeper Elaine Murphy pulling off a vital save from Emma Reaney in the 56th minute to keep Mayo’s noses in front when it mattered most.

Peter Leahy’s side burst right out of the blocks in an opening 30 minutes that started in snow and ended in glorious Spring sunshine.

Rachel Kearns got things moving with a point from out on the left inside the first minute and that was quickly responded to by a Sarah Connelly point for the hosts.

Mayo took total control for the next quarter-of-an hour with Grace Kelly kick-starting a scoring burst of 2-4 without reply with a fine effort from out on the right on four minutes.

Less that 60 seconds later the Moy Davitts attacker had the ball in the back of the net when she was played in by Kearns and took a shot for a point that dropped short and caught out Dearbhla Gower in the Galway goal.

Mayo could have had their second goal almost immediately when Fiona McHale was played in through on goal but her effort was well saved by Gower. 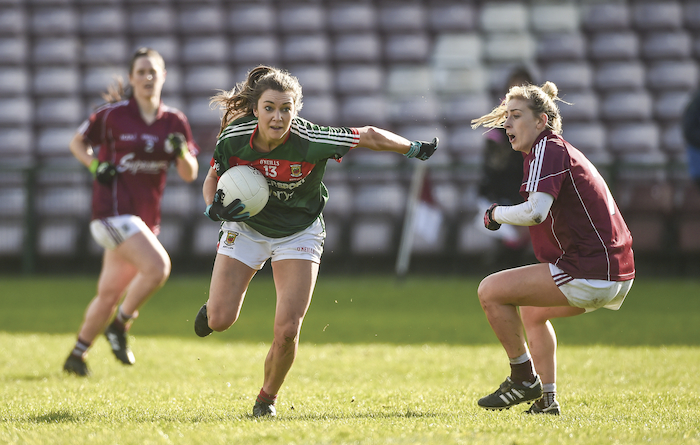 On the run: Mayo's Niamh Kelly looks to find some space against Galway. Photo: Sportsfile

Kelly kicked two more points over the next few minutes to put Mayo six clear with 15 minutes gone on the stop watch. Her second score in that burst was set up by Clodagh McMananmon who intercepted an attempted Galway break in the middle of the field.

On 16 minutes Mayo plundered their second goal when Sinead Cafferkey finished well after being played in by McHale and it looked like they could run out very big winners in Salthill.

That goal was quickly followed by Kelly’s third point of the day putting Mayo 2-5 to 0-1 clear with 13 minutes to go to the break.

Galway found a bit of a foothold in the game over the next few minutes and they kicked four points before the break with Tracey Leonard raising the white flag twice and Cathriona Cormican getting a double of her own.

Mayo’s final score of the half came from Eilis Ronayne who drove up from her corner back position to drive the ball over the bar on the run.