When these two sides come face to face on May 13 in Castlebar if there are half as many talking points as in this game, the paying punters will have got their monies worth.

Mayo dominated possession for long periods of this game, but they were turned around on the Galway 45 meter line by a blanket of massed maroon jerseys.

Galway set up to suffocate the Mayo attack and hit them on the break at pace and it paid off as their strike runners punched hole after hole in the Mayo rearguard over the 85 odd minutes of this contest.

Mayo finished the game with 13 players after both Cillian and Diarmuid O’Connor were shown the line, the elder brother for a forearm into the head of Galway corner back Eoghan Kerin for which he got a straight red card and the younger brother picking up his second yellow for a high challenge on the same player two minutes after his sibling - both late in the game.

Galway at that stage had been reduced to 14 themselves after Paul Conroy picked up a second yellow for his involvement in one of a number of melees that punctuated the final third of this encounter. 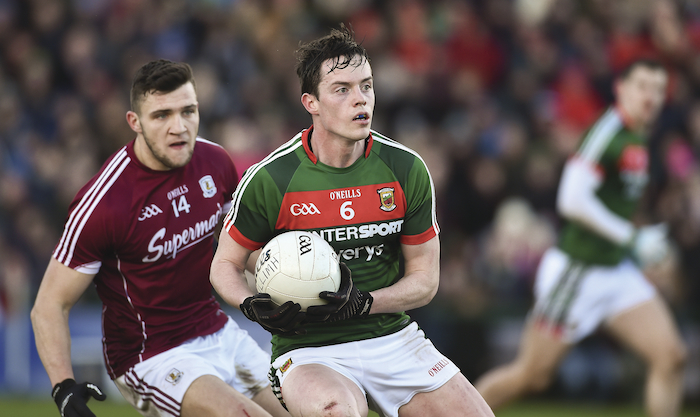 As for the action itself, Galway were deserved winners with Barry McHugh leading the line up front finishing with 1-3 to his name. His goal 18 minutes in was the decisive score in the contest as kept Galway far enough in front of Mayo that they could sit back and take the punches from Mayo and look to hold out to win the game with a solid defensive display.

That score put Galway into a 1-3 to 0-2 lead following a brace of points from Damien Comer and one from Shane Walsh for Galway, with Diarmuid O’Connor and Kevin McLoughlin pointing frees for Mayo.

Mayo tagged on three more points before the break with Paddy Durcan and Diarmuid O’Connor slotting over points from play with O’Connor adding his third from a placed ball. Galway added one more point before the short whistle with Shane Walsh kicking a free to send Galway in leading 1-4 to 0-5 at the turn around.

Early in the second half Mayo were forced to make two unintended switches when Caloan Crowe and Ger Cafferkey clashed heads trying to win the ball back from Galway captain Damien Comer sending Ger McDonagh and Donie Newcombe into the action.

Mayo wanted to draw first blood in the second period, but it was Galway who got the scoreboard moving early in the final 35 minutes with McHugh and Johnny Heaney kicking their side into a four point lead inside the opening five minutes. 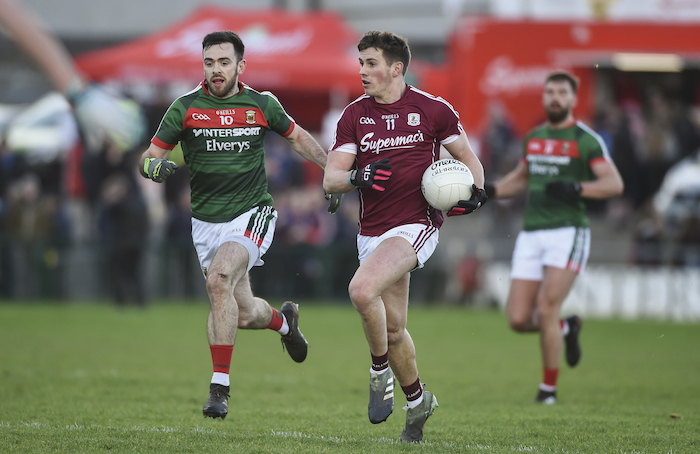 O’Connor pointed a free to cut the gap back to three points and leave the game firmly in the melting pot, but Mayo never looked like engineering the goal scoring chance they needed to put themselves on the front foot in the contest.

It was Galway who drove on with McHugh leading the way alongside Eamon Branigan with the Galway number 12 kicking three second half points and Paul Conroy also found his range adding two minors to his sides total in the second half.

The three little brawls that broke out in the final quarter of the game saw eight minutes injury time added on and Galway were able to hold the Mayo defence at bay and at one stage led by seven points, before late, late scores from Eoin O’Donoghue and Jason Doherty closed the gap to five at the terminal whistle.

For Mayo they face into a game against All Ireland champions Dublin in a fortnights time, a game they really need to pick up some points in before their final trio of contests in this years league campaign.