Mayo bookended their FBD League campaign by registering their first win of the new season against Sligo in James Stephens Park. But as Mayo manager Stephen Rochford said after the game; “That sort of performance won’t get you any points in Clones.”

Mayo looked to be cruising to victory at the turn around leading by 0-7 to 0-2, but seeing his side only convert four scores in the final 35 minutes is something that has the Crossmolina man with a lot of thinking to do over the coming week.

Mayo fielded a strong side for this one with eight of the team who started last years All Ireland final and three more who came off the bench in that game all getting starts. Amongst them was the first appearances this season of Andy Moran and Aidan O’Shea who got some miles into their legs before the start of the league season next Sunday against Monaghan.

Despite playing into the teeth of a very strong wind, Sligo started the brightest but were off target on three occasions in the first four minutes of the game. They finally edged in front seven minutes in through a pointed from from Stephen Coen.

Mayo levelled the game up two minutes later thanks to a lovely score on the run from the boot of Diarmuid O’Connor and a minute later, Andy Moran was fouled inside and and Jason Doherty converted the resulting free for his first score of the day. 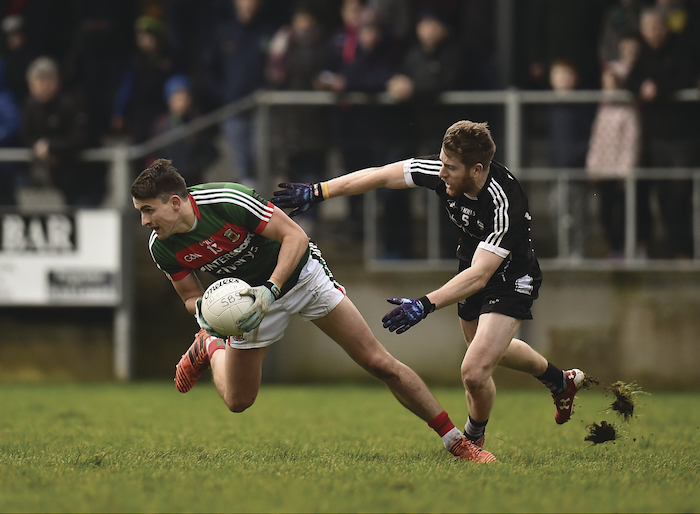 Flying Doherty: Jason Doherty finished the game with 1-4 to his name. Photo: Sportsfile

Moran and Aidan O’Shea were heavily involved in Mayo’s next score to set up local hero Evan Regan to slot over off his left boot to leave Mayo two clear. The lead was stretched out to thee points before the 15 minute mark when Doherty marked his cards for the second time in the game after Regan had been fouled and Mayo looked to be well in control of the contest.

They went on to add three more points over the next 20 minutes through Regan, Doherty and a top class effort from Paddy Durcan to put Mayo up 0-7 to 0-1, with Sligo finally getting back on the scoreboard just before the turn around through a Adrian Marren free.

The Yeats County men were back out on the field a good four minutes before their hosts for the second half and they started it like a runaway train. Niall Murphy who came in at half time launched over a long range point to get things going inside the opening 60 seconds and from the resulting kick-out Neil Ewing was able to intercept the ball and slice the posts. Stephen Coen (Sligo ) tagged over a long range free to cut the gap back to just two points and with seven minutes gone in the half, it was a one point game after Gerard O’Kelly-Lynch slotted over after some good work by Pat Hughes in the build up to that score. A minute level the games level at 0-7 to 0-7 after a wonderful score from Coen (Sligo ) who drove the ball over the bar off the outside of his boot from a sideline ball, after Mayo had got their restart wrong again.

Mayo though hit back in the best way possible almost straight away. Evan Regan took on a difficult looking free from distance into the breeze. He drew it back towards the target brilliantly, but the ball dropped short. Aidan O’Shea was in the danger area making a nuisance of himself to the Sligo defence and helped the ball on to Jason Doherty at the back post who applied the requisite touch to finish the ball to the back of the net and put Mayo three clear again. O’Shea got his name on the scoreboard not long after and there was four between the sides once again. 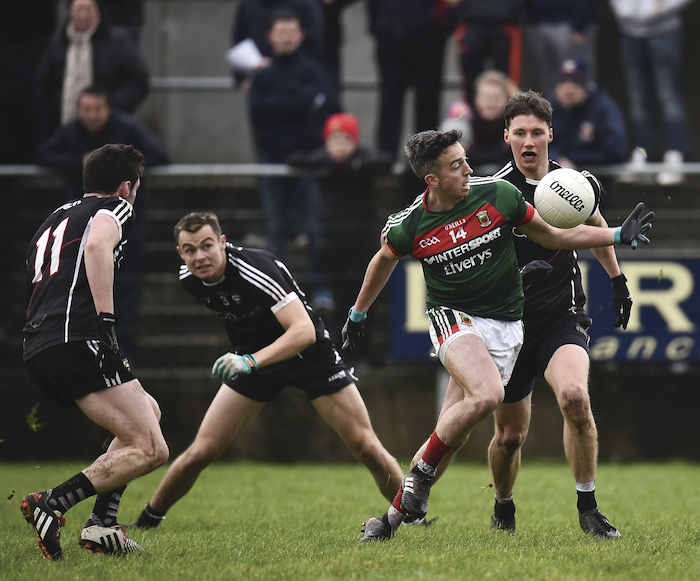 Coen in the number 13 Sligo shirt wasn’t done yet though and he kicked a top class point to bring the game back to just a major between the sides. A Doherty free with 15 minutes to go, kept Sligo at arms distance but they did come back again with Coen and Murphy adding points to leave just two between the sides as the clock wound down. Regan kicked Mayo three clear again with not long to go, before Marren landed his fifth of the day - cutting the deficit to just two with time almost up.

Mayo did well to see out injury time, with Aidan O’Shea winning two frees to take some sting out of the contest and it did look like they had the ball in the back of the net right at the death, but Regan’s effort was ruled out for a square ball. But it mattered little as the full time whistle blew shortly afterwards, next stop Clones and a much better performance from Mayo will be needed that day.