There’s no easy way to win an All Ireland, and boy are Mayo doing it the hard way. It’s back to headquarters on Saturday for another swing at Kerry as the look to book an All Ireland final date in Croke Park in September.

Mayo games never fail to deliver on the entertainment front or the heart-in-mouth moments and almost in a repeat of events three years ago, they had to hope that Bryan Sheehan didn’t have the power in his legs to kick a last second injury time winning free. Then it was Seamus O’Shea who plucked the ball from the sky as it dropped, this time it was his brother Aidan who pulled it from the clouds as the ball dropped short of the target and secured possession, before Maurice Deegan blew the full time whistle.

The weather was terrible and not for the first time Stephen Rochford threw a curve ball right from the off, by placing Aidan O’Shea on the edge of his own square to stop the aerial threat of Kiearan Donaghy. The tactic kind of worked, with Kerry not hammering the ball in long on top of the Austin Stacks man, but he was quicker moving over the ground than O’Shea when it was played in low and caused plenty of problems, but that’s not O’Shea’s fault, he’s not a defender and asking him to learn how to play as one inside a few weeks was going to be a big ask for the Breaffy man or any man. 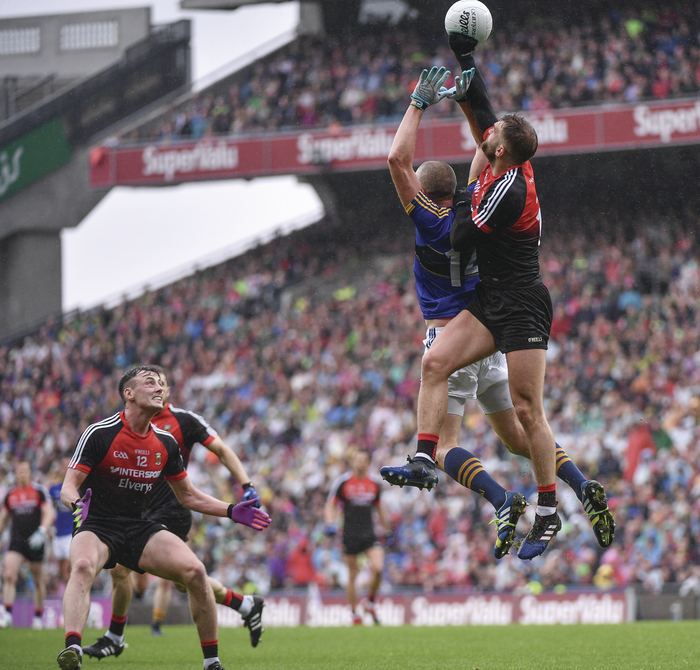 Up and under: Aidan O'Shea breaks the ball away from Kieran Donaghy. Photo: Sportsfile

The one time O’Shea got isolated away from Donaghy was 44 minutes in when he looked to get on the end of a passs out from Kieth Higgins to set up an attack and the ball skipped off the deck away from him over the sideline. Kerry pounced driving the ball in long to the big number 14, it broke kindly when he and Seamus O’Shea challenged for it in the air, into the path of David Moran. The Kerins O’Rahilly’s man shot for goal, forcing David Clarke into a fine save, but Johnny Buckley was on hand to finish the ball to the net to score Kerry’s second goal and pull the game level. From then on it was nail biting stuff as the game could have gone anyway.

Andy Moran put in an All-Star winning performance kicking 1-5 from play and winning primary possession for Mayo countless times. He got the game going on the scoreboard five minutes in showing great awareness to be in behind Cillian O’Connor to pick up a break from a Diarmuid O’Connor pass and rattle it past Brian Kelly to the back of the net. Jason Doherty - who was outstanding in the first half, kicked Mayo’s first point a minutes later after Tom Parsons had done very well to win a Kerry kick-out. Paul Geaney and James O’Donoghue kicked points from frees in the next few minutes to get Kerry motoring with Andy tapping over his first point of the day to leave Mayo up by three after 12 minutes. But Kerry were about to serve warning they were up for the challenge. Mayo were turned over out on the Cusack Stand side and the ball was fed to Donaghy who drew the Mayo cover and he slipped the ball into Stephen O’Brien who fired it low past David Clarke in the Mayo goal. 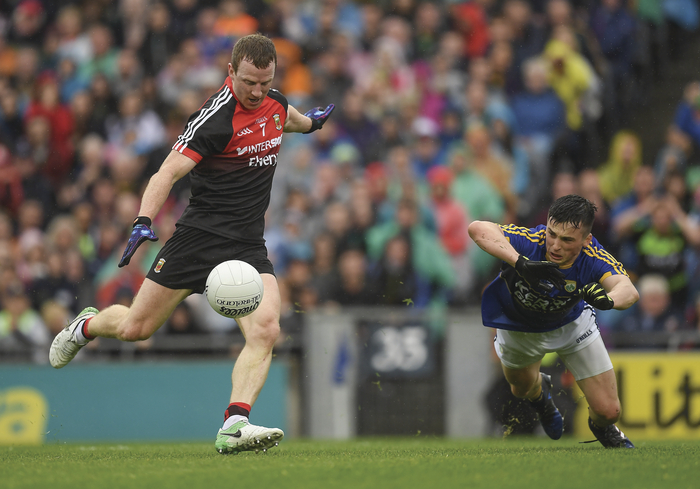 The Kingdom sucked in great life from that goal and hit Mayo for two points in quick succession, with Killian Young and O’Donoghue kicking two on the bounce, Moran responded for Mayo to cut the gap back to two and with 15 minutes to go in the opening half Mayo bagged their second goal of the day. Colm Boyle was up raiding from the back and he got the ball on the edge of the D, sold a dummy to his man, before buying and selling Paul Murphy with another on his way to rifling it past Brian Kelly to put Mayo two clear. Cillian O’Connor pushed Mayo three to the good with a well taken score straight after and Andy Moran made it four within seconds of the restart from that score, it should have been goal number three for Mayo with both Cillian O’Connor and Moran seeing their shots blocked. It also could have been a penalty for Mayo with one of the Kerry players pawing the ball away from danger on the deck, but in all the commotion, Maurice Deegan failed to see it. Kerry came right back at Mayo and some needless fouling let them tag on four points before the break, three of them from frees by Geaney and one from Donaghy from pay to send the sides in level at the turn around.

Kerry drew first blood in the second half through a Geaney point a minute after the resumption, with Moran responding in kind two minutes later. Donal Vaughan, O’Connor and Tom Parsons who fisted over - when he could have went for goal had Mayo 2-9 to 1-9 up on 41 minutes, but the next score of the game was to be Kerry’s second goal. Mayo had also made their first big change of the game, bringing in Paddy Durcan for Colm Boyle on 42 minutes, Boyle was moving well but Durcan was going to have a dramatic say on the outcome of this game near the death. 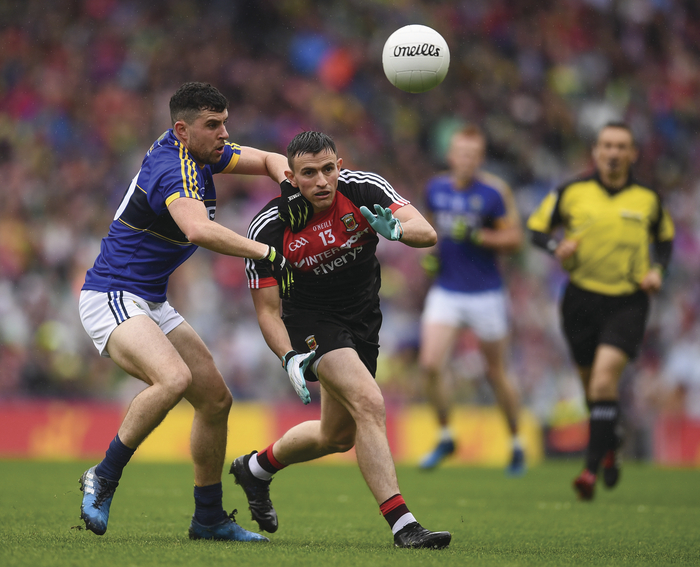 Eyes on the ball: Jason Doherty wins the ball out in front of his man. Photo: Sportsfile

Geaney and O’Connor swapped points from frees as the tension began to be ratcheted up even more in the pressure cooker on Jones Road. O’Donoghue edged Kerry back into the lead on 52 minutes only for Moran pull Mayo level at 2-11 each two minutes later. The Dingle danger man pushed Eamon Fitzmaurice’s men into a slender lead 14 minutes from time, only for Tom Parsons to fire over his second and O’Connor to hit a lovely point - after a brilliant knock-down by Andy Moran to push Mayo into the advantage position with ten minutes left on the clock. But there was plenty of drama still left to go in this one, Barry John Keane kicked Kerry level within minutes of coming on to the field and with time almost up in normal time Paul Murphy gave Kerry the lead once more. Five minutes injury time were signalled and with four of them gone, Paddy Durcan slotted over a nerveless score for Mayo to haul them level. However, there was still time for Sheehan to have a shot a glory for his side, it fell short and with that the final whistle blew and hearts began to drop back down to their normal beating level. The heart rates will start to rise again, sometime around 2.58pm next Sunday as Mayo go into their ninth championship match this season, and hopefully at least one more to come if they tickers from Blacksod to Beaken can take it.