Three second half goals sent Mayo in the All Ireland semi-final against Cork in a fortnights time in Mullingar on Saturday. Frank Browne’s outfit showed plenty of fight and heart and no little skill in their win over the Ulster champions. It was a game that had it all, two yellow cards, a six point comeback, a goalkeeper getting injured and plenty of hard hits all over the field.

Speaking after the game a delighted Browne said “People doubted us, but I’ve always said this over and over again, people doubt character, whatever else we do, we said, whatever we do, we’ll go out on our shields, fighting and living for everything we can and that’s exactly what we did.” 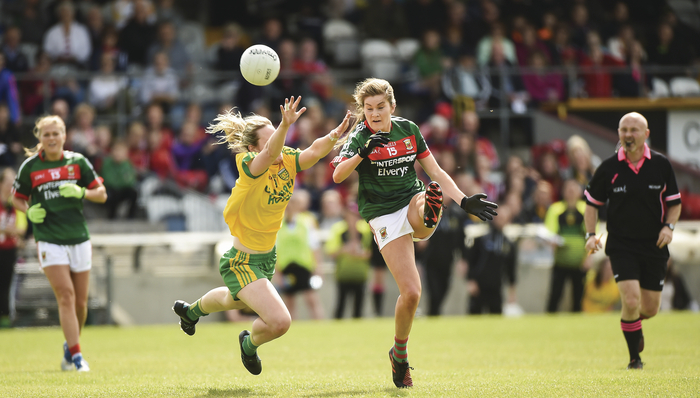 Mayo probably couldn’t have got off to a worse start trailing by 2-2 to 0-2 with eight minutes gone in the first half, but they knuckled down and shut up shot in the back line and ran at the Donegal defence with Aileen Gilroy, Grace Kelly, Sarah Rowe and Niamh Kelly putting in top-class shifts in the forward line. While Sarah Tierney, Marie Corbett, Orla Conlon and Rachel Kerans locked things up at the back.

Grace Kelly put Mayo into an early lead with a well taken score, but the Ulster champions hit back with Geraldine McLaughlin hitting a goal after Mayo shut off for a second when Donegal were awarded a close in free. Niamh Hegarty and McLaughlin added on a point each, with Yvonne McMonagle striking Donegal’s second goal in between those points. A Cora Staunton point that was only awarded after a video review brought Mayo back to within six, but it was looking like it would be an uphill task for Mayo.

The looked at that hill and drove hard for the summit. Grace Kelly, Sarah Rowe and Staunton kept the scoreboard ticking over and with nine minutes left in the half the gap was back to just two points. Mayo at this stage were down to 14 after Fiona Doherty was shown a yellow-card for an third person tackle. 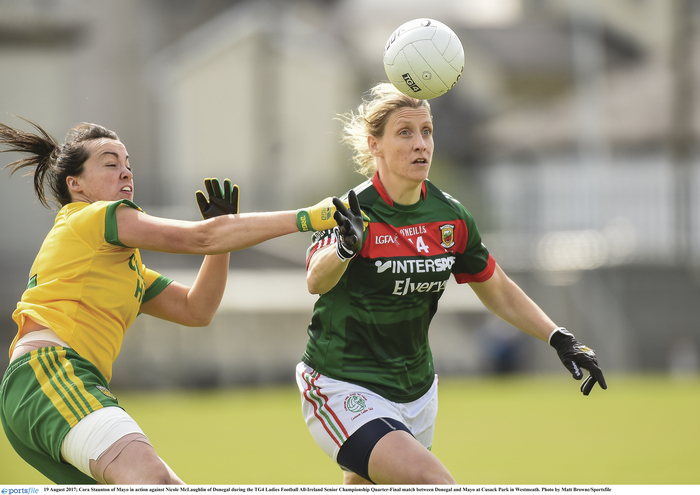 Cora Staunton kicked 1-6 for Mayo in their win over Donegal. Photo: Sportsfile

Staunton kicked a long range point from play to cut the gap back to one and then Grace Kelly kicked her third point of the day to level it up. Donegal ended their scoring drought through a Karen Guthrie free with seven minutes to go to edge back in front, but points from Rowe and Kelly along with another Guthrie effort were to arrive before the short whistle to send the sides in level at half-time on a score of 0-11 to 2-5

The second half saw Mayo really impose themselves on the game, Niamh Kelly’s goal six minutes into the half saw Mayo go into the lead for the first time since the opening minutes. Cora Staunton goaled when she forced the ball over the line after a Niamh Kelly effort dropped short and cause confusion in the Donegal penalty area. That major put Mayo into a commanding lead that they never let up and Grace Kelly’s brilliant goal with eight minutes to go was the crowning moment of the game, she flew down the left wing and fired the ball with power and precision to the back of the net, with a sublime finish.