Stephen Rochford was a happy man not long after the full time whistle in Croke Park on Monday, but he knows that Mayo have to keep improving with Kerry coming down the tracks in 13-days time.

When asked was he a happy man he said, “We’re in the All Ireland semi-final so I’m as happy as that tends to lead any of the managers that are there, it’s a job done for today - but far from anything more than that.”

As for being surprised that his team ran out easy and big winners on the day he added “I wouldn’t use that language, we just played with a more consistent tempo and stopped operating in spurts and taking our foot off the throttle we just sort of played a little bit more on the line and looked for the next score and allow the scoreboard build.”

The big news before the game was that neither Lee Keegan or Ger Cafferkey would start, explaining why he made those calls he said, “I think its been documented about Lee having spent some time in hospital this week, he would have been available if needed going into the final 20 or 25 minutes, he made a really good recovery and it’s an opportunity to acknowledge our own medial team and in Mayo General for the good work the did with him. We just felt the way that, that Roscommon had on the ball, we needed to put a bit more pace into the game and that’s what Tom (Parsons ) and Donal (Vauaghn ) afforded us, they were really good around that middle third. Possession is nine tenths of the law and I thought we did well in getting our hands on the ball and we certainly didn’t turn it over half as many times as we did last week and that led to a lot of frustration in the camp last week.” He also added about Keegan that, “As in 100 per cent he would be available tomorrow, if not then Wednesday.” 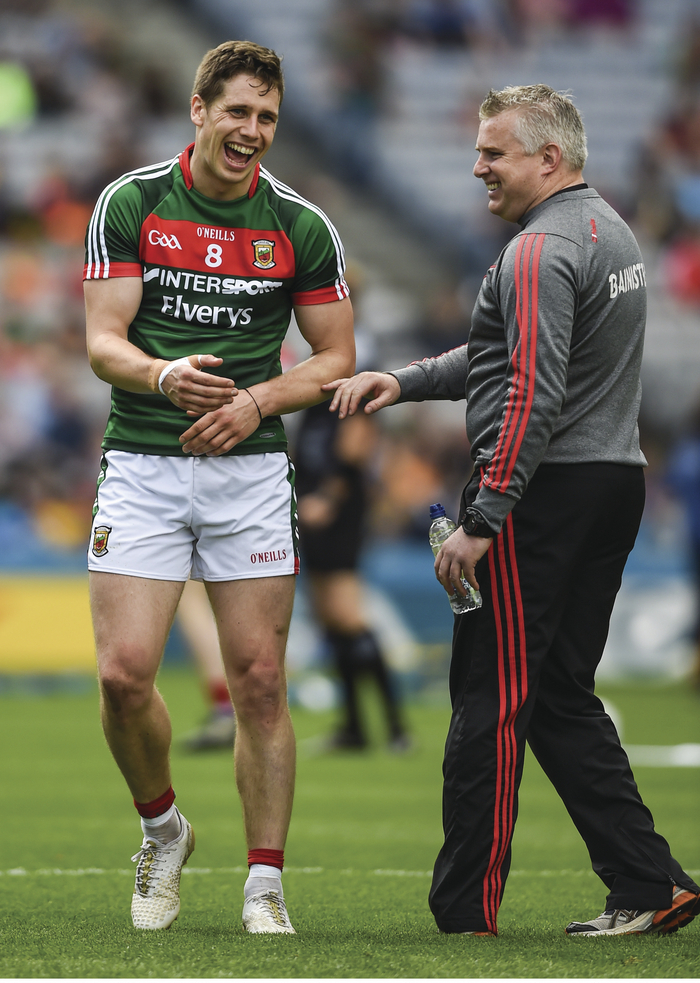 There had been talk before the game that the amount off football that Mayo have had to play this summer could cost them, it’s something that Rochford believes was no big deal for his team really in physical terms.

“I think, these guys and I’m on about inter-county footballers in general - are trained from a conditioning point of view within an inch of their lives, there is nothing left to chance, we trained once this week - because we knew from a fitness level, on a physical basis we were fine. The challenge might be and as much as people wanted to write and talk about it, the challenge was what was the mental fatigue element. But when we sat down and reviewed the tape, the amount of frustration there was in all of us in regards of how poorly we executed (last week ) - things that we just wouldn’t be happy with and that led to an energy of saying, look we’re going to be somewhat different again when we get back into Croke Park.

“With any of these, I’m no psychologist and you don’t know until you get out on to the pitch, we put a big emphasis on starting well as we did last week and we were rocked for 2-2, so I think with any of these it’s about playing on the front foot and trying to dictate the rules of engagement and in most parts we went about doing that.”

There had been criticism laid at some of the decisions made on the field during last weeks game by the management, when it was put to him did that bother him - Rochford said, “It’s like, you know - with all due respect when you don’t win games you take a shelling like, I’m a year and half into the job it isn’t the first week I’ve taken it and it would be great if it was the last week we had to take it, but that comes with the territory, we don’t have any agendas we make decisions as we see them in the game and you know, that’s the same with subs and tactically how you play. You take it when it’s going, I don’t have any major issue with it, I didn’t lose any sleep over it.”

Nationally there has been a lot of emphasis put on the top three sides being Dublin, Kerry and Tyrone , Rochford was asked did it sting being left of out that conversation? He replied saying, “No you can’t control it, our focus was Roscommon, we hadn’t earned the right to be talked about as a potential All Ireland finalist or whatever, and by in large we still haven’t, we have to show up and put in a performance in 13 days time, one that will be another monumental ask of us, the guys will be eager to get out there and make that performance, more of a consistent one than we have had for 2017.”

“I can guarantee there was no motivation or discussion around being outside the top three or four, our sole focus this week was on primrose and blue - Roscommon, what can we do here, what can we do there or what we can bring to the game and what we needed to do and how we could do that, what I’m talking about there is skill execution, timing of the pass - that’s one performance and the challenge that we will be laying down for ourselves is that can we replicate it or one that is good enough to beat the Munster and league champions, the form that the other teams have been showing shows what kind of challenge it is going to be.

Playing week on week can be an advantage and Rochford said that looking at this win people could easily say that, but it could all be different if things don’t go well in Mayo’s next outing.

“It looked tonight it was positive, you could be talking a fortnights time that we looked a little leg weary, but I have no concerns with that, the carrot that now dangles in-front of the group is there is a chance here to play in an All Ireland final, so Christ above what did you come back for in January if this isn’t what it’s about, it’s been a fascinating championship for everybody, it’s been challenging and loads of players have got time and through the back-door last year we got more of a flow what our team was about and I just hope over the next fortnight that we continue in that frame of mind. 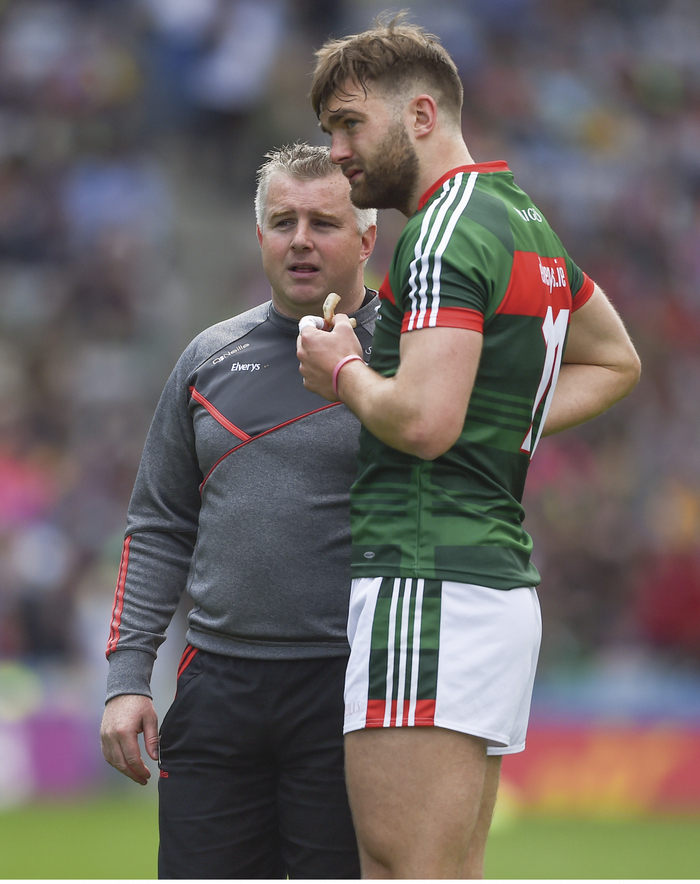 Planning for the next one: Stephen Rochford and Aidan O'Shea talk after full time on Monday. Photo: Sportsfile

As for Kerry in the semi-final he said, “We’ll go in as the underdog, but that doesn’t matter, I’m sure there is an all mighty game left in us, if not more.”

Earlier in the summer there was a lot of focus put on Aidan O’Shea for things off the field, but over the past few games he has been in some outstanding form, when asked was it good that the focus was now back on his on field efforts, it’s always been about football and nothing else that the focus in the Mayo set up has been according to Rochford.

“My conversations with Aidan has always been about his football, he’s in really good form, but no more than last week it was labeled as a one team with Lee’s performance, we’re not a two man team with Lee and Aidan either. Cillian, Keith, Andy, Brendan Harrision, Seamie, Tom Parsons all these guys have to perform otherwise - we’re going to get beaten the next day out so in any team of the four that is left, you got to have performers into the 20s, because your bench is now crucial against these teams from not just a fitness point of view, but also impact.”