When 15 minutes before throw in, it was announced that Footballer of the Year - Lee Keegan wouldn’t be starting there was an air of fear amongst the Mayo supporters who made the pilgrimage back to Croke Park on Bank Holiday Monday. But once the ball was thrown in that unease was soon vanquished as Mayo went right at Roscommon and rolled them over in impressive style at the second time of asking.

Inside the opening 15 minutes Mayo had opened up a six point lead “pouncing” on Roscommon from the first whistle as described by Roscommon manager Kevin McStay. Donal Vaughan who came into the starting 15 alongside Tom Parsons, picked up Roscommon danger man Enda Smith and much like last week he ran the Roscommon man ragged all over the field in the earl exchanges. 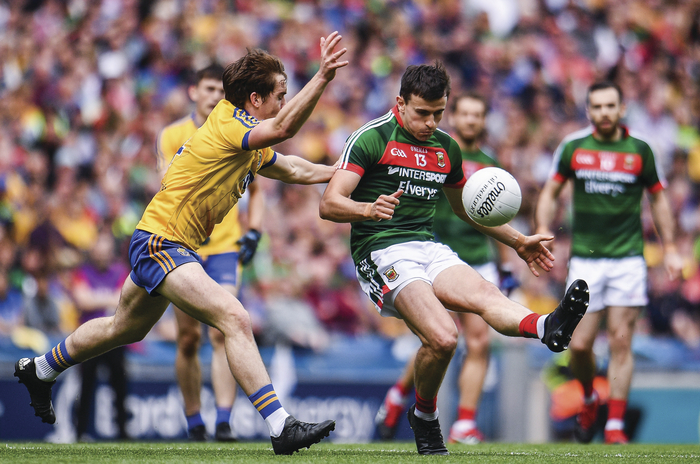 Up and over: Jason Doherty kicks a point for Mayo on Monday. Photo: Sportsfile

Aidan O’Shea was bundle of energy early on and was fouled for Mayo’s opening score a free from Cillian O’Connor inside the first minutes. O’Connor tagged on another pointed free five minutes later and that was quickly followed by points from Vaughan, Diarmuid O’Connor and Jason Doherty with O’Connnor sliding over his third pointed placed ball of the day in the middle of that run.

Roscommon finally got the scoreboard ticking over in the 20th minute when Smith hit a fine score under pressure and that was followed up by a Sean Mullooly point to close the gap to four. However any notions that Roscommon had of making this a real game were about to blown away by Mayo.

With 23 minutes gone on the stop watch Kevin McLoughlin got away with bouncing the ball twice and fired it to the back of the net, less than a minute later Andy Moran hit Mayo’s second goal and with 28 minutes gone Keith Higgins burst from the back to be on the end of a flowing move to rattle the net for a third time - and with that the game was done and it was a matter of how many Mayo would win by, not if they would.

Mayo kicked two more points before the break through Aidan O’Shea and Jason Doherty, with Roscommon responding through points from a Diarmuid Murtagh brace, one form play and the other from a free, to send Mayo in leading by 3-8 to 0-4 at the short whistle. While Mayo were home and hosed, there will still be things that Stephen Rochford will want to see improved on in that first half performance with kicking seven wides and only taking eight of the 20 scoring chances they created from play in the first 35 minutes. 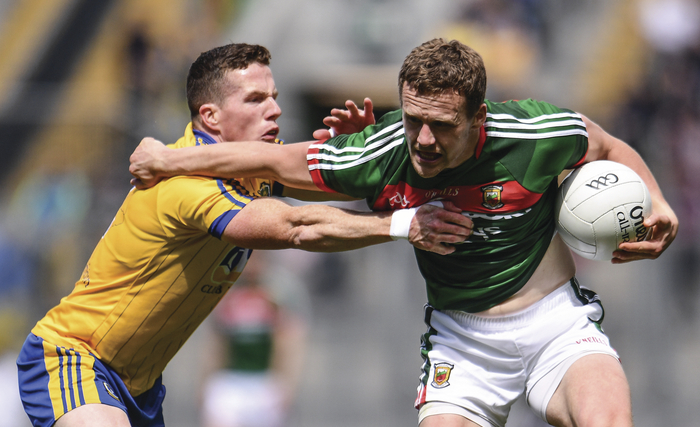 Going for it: Andy Moran looks to make a break for goal against Roscommon. Photo: Sportsfile

The second half was just a matter of seeing it out and making sure that nobody got injured or picked up a needless red card ahead of the All Ireland semi-final with Kerry in two weeks time and that’s what Mayo did in a professional manner.

The added on another 1-11 to their total with Cillian O’Connor finishing off Mayo’s fourth goal of the day ten minutes into the second half as they cantered home to victory. Mayo could have hit more on the scoreboard and with Kerry coming up in the very near future - that is an area they will have to work on as no easy chance - can be missed against the league champions. Of the Mayo subs that were introduced, Shane Nally kicked two excellent scores with David Drake and Stephen Coen also raising the white flag down the home straight.

It was a much improved performance from Mayo from the one eight days perviously and they are back in the All Ireland semi-final for the seventh season in a row, nobody will be able to doubt their hunger and application after this one, but much greater challenges lie ahead, as apart from the drawn match between these two sides last weekend the gap between the top four and the rest in the country only looks to be getting bigger and the smallest of margins will probably decide if Mayo are playing football in mid-September or will they be tearing strips out of each other in the club championship instead. 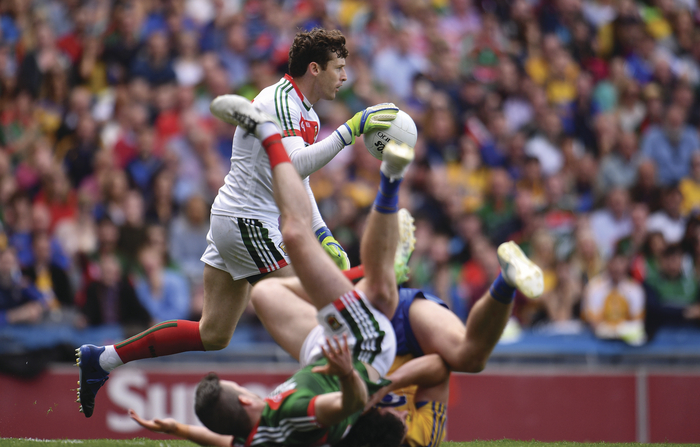 Safe as houses: David Clarke sets up a Mayo attack from the back. Photo: Sportsfile