With 18-minutes of this game gone Mayo were trailing by five points on a score of 0-6 to 0-1 and were being posed a number of serious questions by a hard running and quick thinking Clare outfit, but over the remaining 52 minutes they outscored their hosts by 2-13 to 0-7 to book their place in round four of the All Ireland qualifiers in a fortnights time.

There is still plenty for Mayo to work on in those two weeks, despite an impressive second half showing, they ground Clare down and took their chances for the most part, but once again some in discipline was on show with Donal Vaughan getting a black card as early as the second minute for dragging down Gary Brennan and they ended up finishing the game with 14 players, when Brendan Harrision was also shown a black card deep into injury time - after Mayo had used all of their subs.

The main objective was to get over this hurdle and look forward to facing a beaten provincial finalist and that’s exactly what they did. Aidan O’Shea picked up the official man-of-the-match award and he did put in a fine showing for long periods of the game, but Kevin McLoughlin was the dynamic driving force that propelled Mayo throughout. The Knockmore dynamo got on a serious amount of ball and covered acres of grass in this victory.

Mayo looked to be at sea early on despite Andy Moran getting them going on the scoreboard inside 20 seconds. Clare drove from deep with Martin McMahon punching numerous holes in the Mayo defence - allowing Colm Collins’ side to build up their five point lead, wth David Tubirdy, Gary Brennan and Keelan Sexton all finding the target in that run. They should have hit a goal too, after Jamie Malone broke right through the heart of the Mayo defence, however David Clarke who was making his 100th appearance for Mayo, got down low to pull off a fine save. 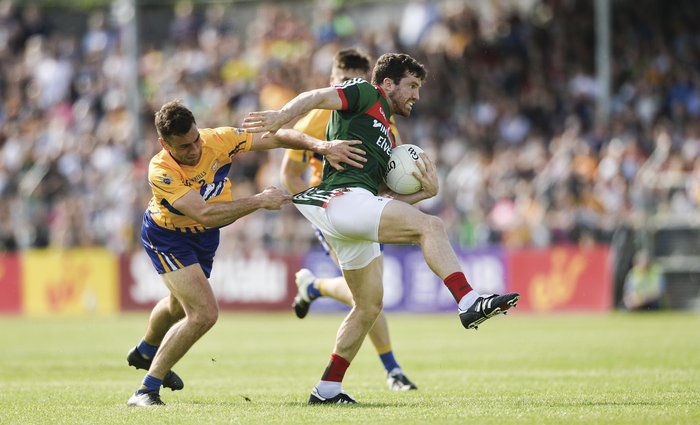 Mayo hit a bit of a purple patch between then and the end of the half outscoring their hosts 0-5 to 0-2, Kevin McLoughlin hit the first in this scoring run - getting the shot off just in time as he looked like he might have over carried the ball. Diarmuid O’Connor then hit a rasper of an effort for a goal that was tipped over the bar by Joe Hayes int he Clare goal, some neat interplay saw Lee Keegan fist over Mayo’s fourth, when one more pass could have played in a goal chance, Andy Moran landed two more fine efforts to cap off a very effective half for the veteran before the short whistle and Mayo went in two behind, with everything to play for.

McLoughlin kicked a quick fire point to open the second act, and he should have hit the back of the net when he broke through not long after but his effort was well saved by Hayes. Seven minutes into the second half the break Mayo were looking for came along. The Clare defence looked to take a short free to get their attack going, but Conor Loftus intercepted it and fed Cillian O’Connor who slammed it home form close range.

A minute later after some great build up play, Mayo got their second three pointer of the game when Diarmuid O’Connor smashed the ball home with a brilliant finish to put Mayo five clear and in complete control of the game. Those goals sucked the life out of the Clare challenge and Mayo were able to keep them at arms length, there was one moment when the game could have turned back toward Clare, when Keelan Sexton looked to have been upended - but referee Sean Hurson waved play on. 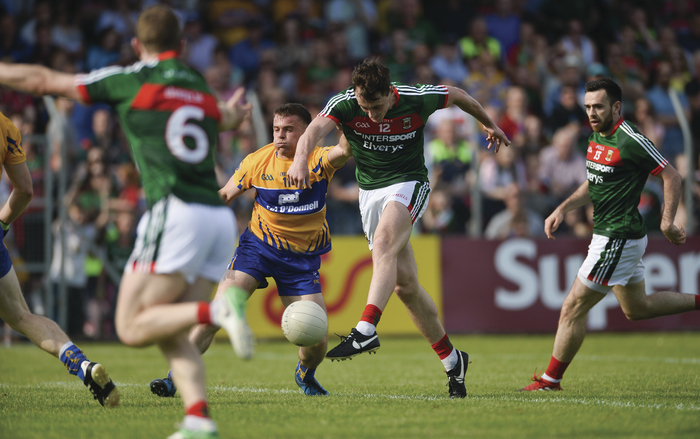 All that was left to do for Mayo was to see the game out, Clare did manage to tag on a few more points with Eoin Cleary and Gearoid O’Brien hitting two fine scores, but Mayo were never in danger of being caught by the Munster men. Job done for Mayo and they have two weeks to recharge the batteries for the challenge that comes up next in two weeks time.