The sophomore slump is something that Mayo manager Stephen Rochford is hoping to avoid this coming season, while it was not exactly a breakout success for this group of Mayo players last year when they went toe to toe with one of the best sides to ever play the game in last year's All Ireland final, for Rochford it was his debut year as the boss in the inter-county ranks. With the National Football League getting under way tomorrow evening when Mayo host Monaghan in Castlebar, we caught up with the Crossmolina native this week to look ahead to the league and back on a few things from last year.

CG: Did you get what you wanted out of the FBD League?

SR: "I think so, we entered into the competition with a number of players obviously being in South Africa and that afforded other players the opportunity to come in and to stake a bit of a claim and I think we've seen them do that. But there's going to be bigger tests ahead obviously and it will let us get bit more of an understanding around where players are and where their abilities lie at this moment in time. A number of the players we put in, they are still reasonably young, so there is plenty of them that will have big futures ahead of them in the Mayo jersey whether it's now or in a few years.

"We also got a good number of competitive games under our belt and we feel that we are in a better shape now than we were 12 months ago, we were a little bit undercooked obviously going down to Cork last year."

CG: Of the players that you got to see in the FBD League will you be keeping them in the panel?

SR: "The squad is always under review, we don't ever make a decision to say it's closed, as you strive to keep the squad at a high performing level and having people remain on their toes. If players are putting their hands up be it through Sigerson or their clubs and guys can perform at the level we want, players can continue to go in and go out as needs be, and we're always looking at that, will continue to do that throughout the league and into the championship at a later date."

CG: For the league itself what is your main ambition, is it to be competitive and learn or go all out to win it?

SR: "I think you know when you're talking about it a number of days before the first game, I think it's silly in someways to make a statement to say, yah we're going all out to win it, because there can be other factors that come along the line that can put you under a bit of pressure. We'll take each game as it comes and we'll be looking to accumulate as many points as possible, and if that puts us into the league final then that's great. There are a number of other items you're looking at too. You're looking to get guys up to match level fitness, and you're looking to give some players an opportunity they may not have had in the past, then you're looking at players returning from injury, and you're looking at the situation whereby you'll be trying new things out like systems or players in new positions and tactical things. You've also got to deal with injuries and player unavailability added to that mix. What I would say is that, it's not a case of we're not looking to win the league, but at this juncture we're not putting it as a must do either, we'll review that after three or four games and we'll see what position we find ourselves in." 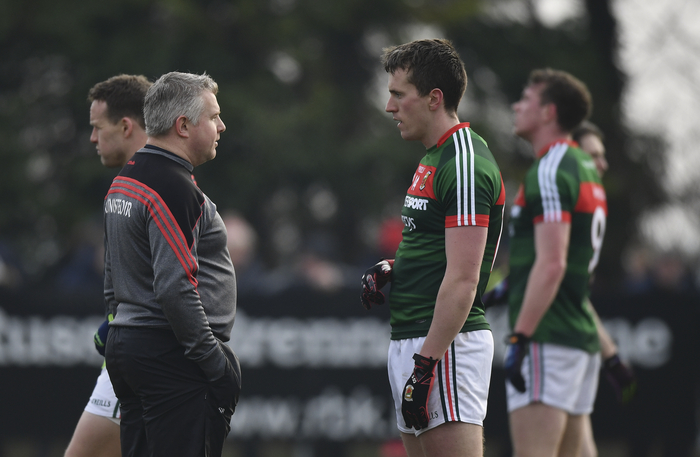 CG: Sean Carey stepped down as a selector at the end of last season and you have promoted Peter Burke up to selector, were there ever any thoughts about bringing in anyone else new to the mix?

SR: "No, I'm very happy with the personnel involved, Peter has bundles of experience both as a very well respected goalkeeper who represented Mayo with a lot of distinction, he has been around the squad for a number of years and is has a real keen and intuitive eye as well, he was a natural choice with him being within the squad already."

CG: Is that sort of continuity something that you feel is a benefit to the squad going on?

SR: "Yes, I said this 12 or 13 months ago, just because the manager changes doesn't mean that you need total change in the full backroom team, and I think you see that in other sports. An element of continuity helps for an easier handover and we've looked to follow through on that, and having the likes of Donnie Buckley and Peter involved in that for us, with them being involved for a number of years has afforded us that continuity and the same with the people in the strength and conditioning team and the medical teams too."

CG: What would you say is the biggest lesson you've learned over the past 12 months?

SR: "I don't think it's a case of trying to nail it down to one lesson, I think each and every day you're picking up on something new, that'll be the case again going into this year, we'll be looking to test things and learn things as we go along. The whole national league comes at you fast, you're playing seven games in around nine weeks and you don't have a lot of time for reflection, you have to get on with it and you learn to cope with the challenges that are there and that will be no different this year."

CG: The condensed nature of the league, does that give you much room for error?

SR: "No, it's why you have to constantly review your priorities and your plans as you make your way through the competition, how do injuries curtail some of your plans for certain games and practical aspects you are trying to test. You have player availability issues with things like the Sigerson, we're now at the height of Sigerson, and we've a number of players involved with that still at this moment and you've a couple of players coming back from short term and long term injuries, once you put all that into the mix, you can see why you have to take each game and week one step at a time."

CG: On the injuries front how does that look?

SR: "We're obviously missing Lee Keegan and Kevin Kane now for a few weeks with Westport winning last weekend. But with any of the injuries we have, you've got to take the position that you are looking at long term and not putting players at any risk. We look to get players back, but they won't be rushed, a couple of them had operations and, when it's right, it will be right for them to return and play, but when it's right."