It was a day that will live long in the memory of those who made the trip to Ennis from the seaside town of Westport on Sunday. Westport are in the All Ireland Intermediate final and that's all that matters now, but if they hadn't been able to surge past Kenmare in extra time, they would have been kicking themselves for a long time, because they dominated this game and should have rattled the back of the net on a few more occasions than they did.

The Kerry champions were the hot favourites going into the game, but that tag didn't bother Damien Loftus' men one bit as they went for the Munster men right from the off with Colm Moran and Paul Lambert a flurry of industry and danger in their inside line.

Patrick O'Shea got the scoreboard moving for the Kenmare men inside the opening three minutes with an effort from close range, Moran had a good chance to level it up two minutes later but his effort tailed wide on the far side. Less than a minute later Lambert cut right through the heart of the Kenmare defence and had a great chance to find the back of the net, but his effort flew just past the post. Seán O'Sé pushed his side two points to the good with a nice effort from 35 meters out and a free from close into the goals was tapped over by Paul O'Connor to leave Kenmare 0-3 to 0-0 up, despite Westport having plenty of the play. That lead was stretched out even further when O'Connor tapped over another free that was brought into scoring range after Fionn McDonagh protested to much about being blown up for over-carrying. 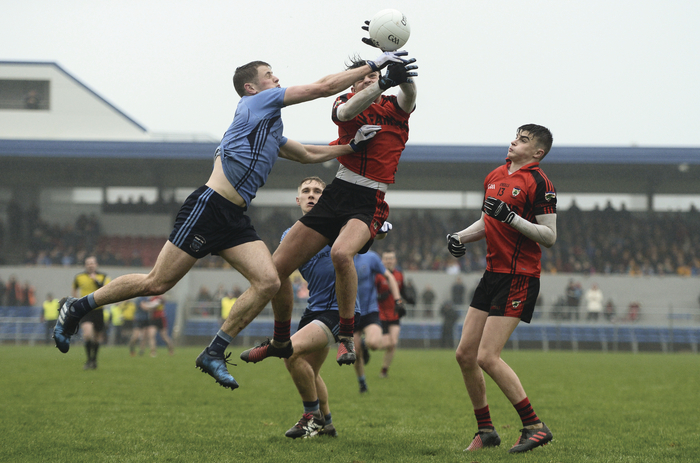 Westport finally got on to the board when Lambert showed a quick turn of direction to create some space for himself to fire over right-footed just after the quarter of an hour mark. That was followed swiftly by Moran's first score, when the Westport number 13 was able to survive being tripped on his way to goal, regather his footing and shoot over from close range.

The same man had a great goal chance four minutes later when Lambert picked the Kenmare defensive lock with an inch perfect pass, but Moran's effort on goal was saved well by Kieran Fitzgibbon in the Kenmare goal. Liam Staunton cut the gap back to just a single point with a placed ball after Moran had been upended in full flight and the Westport crowd had really found their voice at this stage, Phil Keegan had another goalbound effort blocked for the Covies this time by a diving block from Dara Crowley before Kenmare edged back into a two point lead thanks to an O'Connor point from play. Westport did cut the gap back to just the single score before the break when Patrick O'Malley came up from goal for what looked like a long range attempted free, but the custodian spotted Fionn McDonagh in space and he quickly picked him out and the wing forward applied the required finish, to send Westport in trailing by 0-4 to 0-5 at the short whistle

The early exchanges in the second half followed the same vein as the latter of the first, with both sides exchanging points with Kenmare leading by 0-7 to 0-6 with 15 minutes to go thanks to a brace of O'Connor points with Westport replying through pointed frees from McDonagh and Staunton. But over the next five minutes the game looked to have swung in the direction of the Kerrymen as they pushed themselves three clear thanks to points from Séan O'Sé and Séan O'Leary. A goal was always going to be decisive in this encounter whichever way it went and the Westport defence stood firm all day not letting the Kenmare men in with striking distance of a major. With six minutes to go, Westport created the best chance of the day with corner back Niall McManamon charging down the field exchanging passes with Paul Lambert, before he tried to pick out Phil Keegan in acres of space clean through on goal, but he overcooked his pass and it looked like Westport's chance could be gone.

But they kept driving away and with four minutes left on the clock, Lee Keegan turned over a Kenmare man, picked up the ball and tried to break for goal, but he was fouled on the way. Rather than go for a point, Keegan arched the ball into the danger area, where Shane Scott was fouled and after consulting with his umpire the referee awarded a spot kick, which was converted by Scott. Kenmare had one late chance from a 45 by O'Connor but it tailed wide and extra time was going to be needed to separate the sides.

The Kerrymen hit two points in the opening period of extra time through Darragh O'Sé and O'Connor with Westport's sole reply coming from a fantastic Moran score. The final ten minutes, was both physically and emotionally draining for both sides. Westport captain Brian McDermott levelled it up with a huge kick from downtown with six minutes left, two minutes later, Lee Keegan once again turned over the ball from a Kenmare man and he fed Scott who edged his side in front for the first time in the whole contest and a minute into injury time in extra time the win was sealed by a close in point from Colm Geraghty and the Westport fans were getting busy planning a day out in Croke Park.