Not even in their wildest dreams on Saturday night could Louisburgh's lions have dreamt up the situation where they would find themselves 0-7 to 0-0 up against a Glenneigh-Glencarr side that came into this All Ireland semi-final as almost unbackable favourites. But that's the position they found themselves in on Sunday in Cusack Park in Ennis.

With less than 30 seconds gone, James Dowd fired over the bar after a flowing move that saw Austin O'Malley and Michael Gibbons create the space for their number 13. Kevin Gibbons fired over point number two with a great strike off the outside of his boot seconds later. Two more points swiftly followed one each from Michael and Kevin Gibbons. With five minutes gone on the stop watch, Austin O'Malley rolled back the years with a well taken score and a Padraig Prendergast free had the half a dozen marked up on the scoreboard before six minutes had elapsed. When James Dowd kicked his second of a breathtaking start, the huge crowd who made the trip from the Clew Bay village and islands that surround it were dreaming of Croke Park and better days to come.

But... then the dream slowly started to unravel as Glenbeigh-Glencar awoke from their own nightmare and drew Louisburgh into their own shadowy horror. Darren O'Sullivan beat two men and got the scoreboard moving, Tommy Cahill clipped over a free and then just before the 20 minute mark Kieran Courtney fisted the ball to the net after Gavan O'Grady had been able to slip his man and feed the ball across the face of the goal. 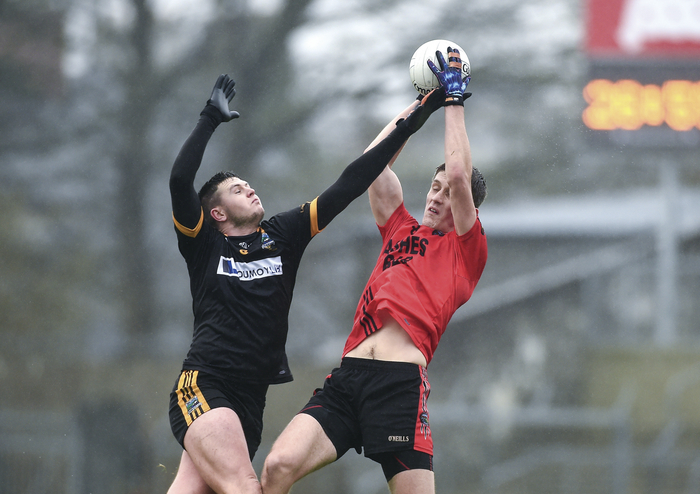 Louisburgh's Padraig Prendergast compeates for the ball in the middle of the park. Photo: Sportsfile

James Dowd did reply for Louisburgh with what looked could be a vital settling score, but the Mid-Kerry men were not for turning. Colim Teahan hit two in a row inside a minute, when a positional switch around in the Louisburgh line left the Glenbeigh-Glencarr wing back unmarked for a brief but vital minute or so. On 21 minutes Courtney was found by Tehan and the game was level. A Padraig Prendergast free edged John Kelly's men in front once more seven minutes from the turn around, but a minute later the ball was in the back of Danny O'Malley's net for the second time when O'Grady finished off a move that saw Glenbeigh-Glencar cut through the heart of the Louisburgh defence with ease. They preceded to add on three more points before the break with Louisburgh responding with two of their own to leave the score 0-10 to 2-8 at the median mark.

Louisbugh needed to get back to grips with the game as soon as the second half started, both sides swapped points early on, but with 39 minutes on the clock, Darren O'Sullivan picked up the ball out past the 45 and blitzed through the Louisburgh defence with ease to burry the ball in the back of the net for his sides third goal and that was all they wrote on this one as a contest. The Kerrymen added a fourth goal not long after through Courtney who finished up with 2-3 from play for the day and it was just a matter of counting down the time until the final whistle.

Louisburgh will be bitterly disappointed with how this one ended, it put a full stop on what's been a fine season, but really they wish it was just a comma.