There might not be a Las Vegas in the Hills of Donegal in reality, but Mayo at least left Ballybofey breaking even thanks to a late deflected James Durcan goal. The Castlebar Mitchels man knew he had to gamble it all on one play at the death and it paid off handsomely for Mayo when all was said and done.

Watch the Full-Time Highlights of @officialdonegal v @MayoGAA in Round 1 of the Allianz National Football League here GAANOW!Donegal: 0-19Mayo: 2-13 pic.twitter.com/cruggY3Gqt

The week ahead will see plenty of work to be done by Mayo ahead of the visit of Dublin to MacHale Park next Saturday, but with a point in the bank balance already from one of the tougher road trips they’ll face this season - they can at least go into it with some kind of confidence against the All Ireland champions.

James Horan put his trust in youth and energy at the start of the game with Bryan Walsh, Fergal Boland, Ryan O’Donoghue, Brian Reape and James Carr making up five-sixth’s of one of the most refreshing but inexperienced attacking units Mayo will have put out on the field in many years.

But when things came to the crunch he was able to call in some heavy hitters from the sideline with Aidan O’Shea, Kevin McLoughlin and Keith Higgins all playing staring rolls - however he didn’t throw out his faith in youth all together with Tommy Conroy playing a key roll after coming on at half time and James Durcan hitting a hot streak the worlds best gamblers dream off hitting 1-3 after entering the action with less than five minutes remaining in normal time.

Donegal will not for the first time be kicking themselves wondering how they didn’t put Mayo away, they were the dominant side for the majority of the contest and had Mayo on the ropes numerous times but failed to land the killer blow to put the down on the canvas and out for the count.

The homeside led by 0-9 to 1-4 at the break and only for some poor wides and even poorer efforts that dropped short into David Clarkes arms - they would have been home and hosed a the middle point.

Even Mayo’s goal had a massive roll of the dice or two go in their favour, Patrick Durcan got so far under an effort for a point it rocketed high into the air, but with very little distance behind it. James Carr did exceptionally well to win the ball and his effort hooked higher the head of Shaun Patton into the roof of the net. The Ardagh man will no doubt claim he meant it, but it had all the look of a point effort that dropped short and he got lucky.

The second half moved along in a tit-for-tat motion for long periods, with Michael Murphy’s peerless free taking keeping Donegal that bit in front all the time. Murphy was exceptional from placed balls landing points from frees and 45 and mark.

When James Durcan came on Donegal were leading 0-16 to 1-10 after Murphy landed another pointed free, Durcan made an immediate impact swinging over a point in return after some good play involving Aidan O’Shea and Ryan O’Donoghue.

Durcan then swapped points with Andrew McClean, before tapping over a third point from a close range free to cut the gap to a single point ad the game slipped into the second minute of injury time and looked to be on a knife edge. 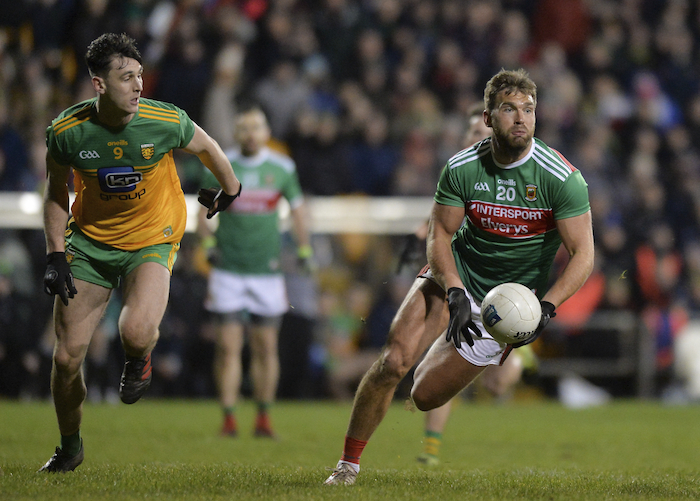 Back on the ball: Aidan O'Shea reutrned to the fold for Mayo as a half-time sub. Photo: Sportsfile

But Donegal looked to have the game won when Hugh McFadden and Murphy pointed in the 39th and 41st minute of the second half to stretch Declan Boners sides lead back out to three.

But they hadn’t counted one last roll of the dice from Mayo coming off and that Durcan was the man who had the hot streak at the table right until the final ball was kicked.