For the second year in a row penalties was needed to split the difference between Mayo and Galway in the FBD League with the southern neighbours progressing to the final 3-2 on spot kicks.

Mayo will look back on this one with a bit of hurt after coughing up a six point lead at the end of normal time, but with 15 minutes of injury time played after Galway midfielder Fiontaoin O’Curraion picked up a nasty looking injury early in the second half it gave Padraig Joyce’s side plenty of time to reel in Mayo before the end.

The visitors raced into an early two point lead with Shane Walsh converting a free and adding another from a placed ball inside the opening four minutes, before Jordan Flynn landed Mayo’s first score of the year with well taken effort from 30 meters out on the right.

Galway edged two clear again when Paul Conroy scooped the ball over the bar from close range is minutes in and a minute later Adrian Varley made it 0-4 to 0-1 after good work involving Tom Flynn and Walsh.

Mayo’s second point came ten minutes in when Rob Hennelly found Mikey Murray int the middle of the park, the Ballina men fed the ball to Kevin McLoughlin who rolled his man and slotted the ball over the bar. 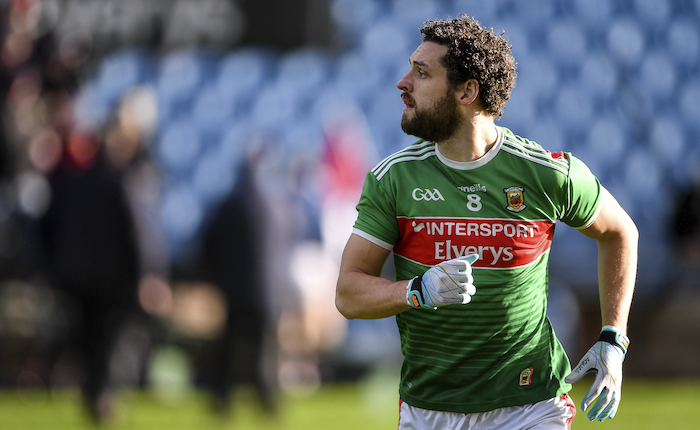 Flynn cut the gap back to a single point shortly afterwards when he collected the ball close in after Brian Reape had seen his goal chance blocked out a combination of Conor Gleeson and Johnny Heaney - but Galway went straight back down the park and Walsh cut a dash through the Mayo defence and landed his sides fifth point of the day.

Ballintubber’s Brian Walsh who had an impressive showing replied for Mayo on the quarter-of-an-hour mark with a well taken left footed effort and a minute later it was all square when Kevin McLoughlin got his second of the day.

Reape found his scoring boots for Mayo with a close range finish after good work by McLoughlin to put Mayo in front for the first time on the afternoon and the biggest cheer of the day came 18 minutes in when Tom Parsons who was making his first start for Mayo since serious knee injury against the same opposition in the championship hung one over the bar from out the right 11 minutes from the interval.

Galway weren’t going away and Varley kicked his sides sixth point of the day after sprinting out from the corner forward position and winning the ball before slinging it over the bar. On the half hour Brian Walsh got his second of the day after showing great strength to hold on to the ball under pressure before shooting a point.

Michael Daly and Walsh responded for Galway to level it up at eight points each and then they had a great chance for a goal when Daly found Brannigan inside the cover but his effort crashed back off the post and away to safety.

Mayo did have the final say on the half when Conor Loftus pointed a free from close range in injury time to send Mayo in leading 0-9 to 0-8. 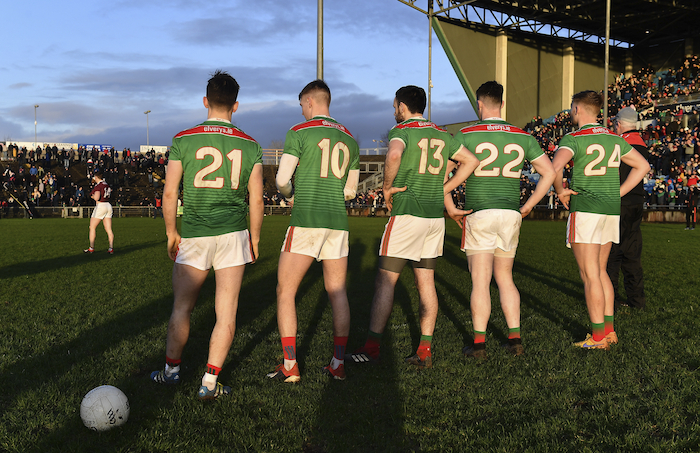 Galway started the second half brightly and had the lead wiped out inside the opening minute with Varley pointing after being found in space by Walsh and from the resulting kick-out Galway won the ball back and Walsh edged his side back in front again.

The game was then held up for 12 minutes as O’Curraoin received treatment on the pitch and had to be stretched off. After the long lay off from the action Walsh put Galway two clear from a close range free.

Conor Loftus hit back for Mayo with his second point of the day from the next play, but the action kept moving at a break neck pace and Galway landed the next score from Daly. The Tribesmen were then reduced to 14 men for ten minutes when Cillian McDaid was shown a black card.

Reape and Mikey Boyle traded points to leave Galway two to the good before Mayo hit a purple patch of form and looked to have swung the game in their favour.

Kevin McLoughlin found himself in behind the cover and flicked the ball over Gleeson’s head to the back of tenet to put Mayo one in front, that was followed by a point from Walsh then three from Reape and two from Boland to put Mayo into a 1-17 to 0-14 lead and looking good as the game moved into injury time.

But with 12 minutes put up on the board there was still plenty of time for Galway to hit back and they did. Varley hit the back of the net after Hennelly had done well to save Johnny Duane’s close range effort.

Walsh kicked two points from frees which left just one in it and sub Liam Costello held his nerve to level it up at 1-17 to 1-17 and send the game to penalties. 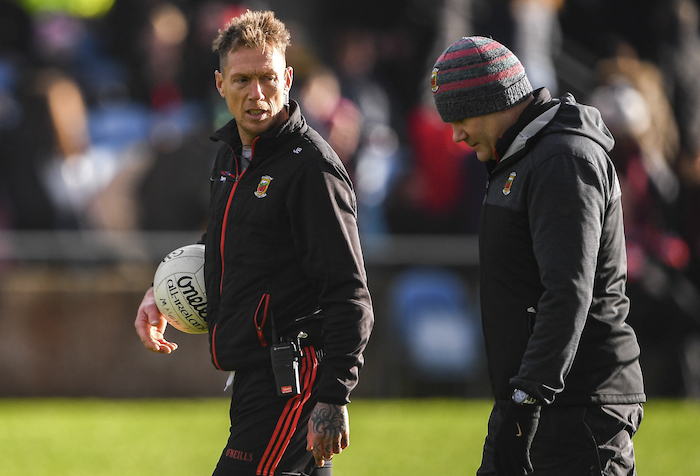 Talking it out: Ciaran McDonald and James Horan in discussion ahead of the game. Photo: Sportsfile

Shane Walsh was first up and he hit the back of the net, Fergal Boland was Mayo’s first penalty taker and saw his effort saved by Gleeson.

Paul Conroy took Galway’s second penalty which was saved by Hennelly and he was followed by Liam Irwin who made no mistake with his spot kick.

The third round of penalties saw Damien Comer hit the back of the net and Kevin McLoughlin replied in kind to make it 2-2.

Adrian Varley saw his effort hit the post and hand the advantage to Mayo, Gary Boylan saw his first effort saved by Gleeson but a re-take was ordered by the referee who adjudged the Galway net minder to have been off his line. The result was the same second time around with Gleeson saving the re-take.

Tom Flynn was next up and he made no mistake, putting the pressure on Brian Walsh who was Mayo’s fifth penalty taker and he saw his effort crash back off the bar to send Galway into the final and send Mayo out of the competition.