It all came tumbling down in the 12 minutes after the second half started - after top class first half display that saw them lead by two points at the break, Mayo found themselves trailing by ten points and down and out of the championship for the year.

You can’t give Dublin and inch, because if you do they’ll take the proverbial mile and that’s exactly what happened in the opening exchanges in the second half - two goals from Con O’Callaghan sucked all the oxygen out of Mayo’s lungs and breathed new life into those in sky blue.

In the first half Mayo hit Dublin with all they had, hassling and harrying them at every opportunity - closing down avenues of attack for the five-in-a-row chasing metropolitans in an absorbing, if suffocating 35 minutes of action.

James Horan made three changes to the Mayo team that had only been announced a few hours earlier before throw-in. Into the starting 15 came Diarmuid O’Connor, Matthew Ruane and Donal Vaughan with Darren Coen, Fergal Boland and Kevin McLoughlin making way.

Mayo raced into an early two point lead with Cillian O’Connor’s pointed free needing hawk-eye to have been adjudged to have gone between the posts, then one of the least likely men to take a point off the outside of his boot Seamus O’Shea doubled their lead.

Two Dean Rock frees had the game level just after the ten minute mark, before James Carr hit Mayo’s third after pulling off a great shimmy to create the space he needed to find his range. 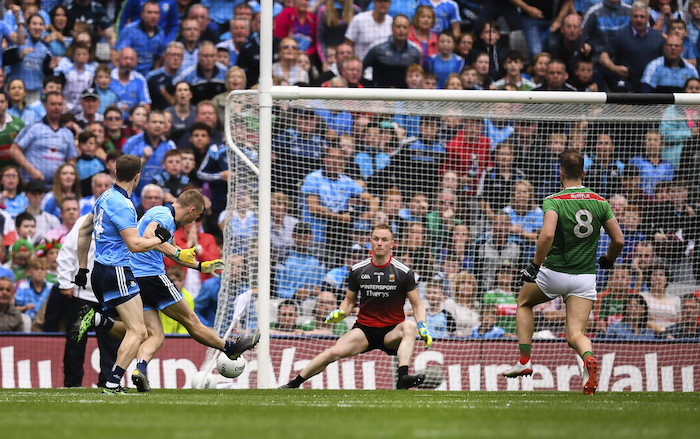 Paul Mannion landed two in a row - his first coming after Mayo were turned over on their own 45 and the second one after Robert Hennelly’s restart failed to find it’s target and he slipped it over to edge Dublin in front by one.

Mayo kept their nerves and from the next play O’Connor sold a dummy to find the yard of space he needed to level it up and two minutes later Paddy Durcan kicked the first of two opening half scores to give Mayo a one point advantage once again.

Cillian O’Connor and Rock traded frees before points from Colm Boyle and Durcan had Mayo 0-8 to 0-5 up, the final score of the half came from a Brian Howard effort in injury time and it looked like this game like many of these sides other meetings would go right to the death.

But it wasn’t to be as the Dublin machine cranked up through the gears in double quick time after the restart and left Mayo trailing in their wake, chasing dust.

Rock cut the gap back to a single point from a free dead straight in front of the posts a minute in and less than 60 seconds later the first dagger through Mayo’s hearts arrived. The ball was pumped into the right hand corner of the field where O’Callaghan had got himself isolated on Lee Keegan, the Westport man lost his footing and O’Callaghan made no mistake.

The Dublin midfield then began to take over the game as Mayo’s tired legs couldn’t keep pace with the energy and effort they brought to the proceedings. O’Callaghan’s goal was followed by points from Niall Scully, Paul Mannion hit two and Rock added another free before O’Callaghan hammered home his second goal on 45 minutes and Mayo were struggling to hold on for their lives on the field. 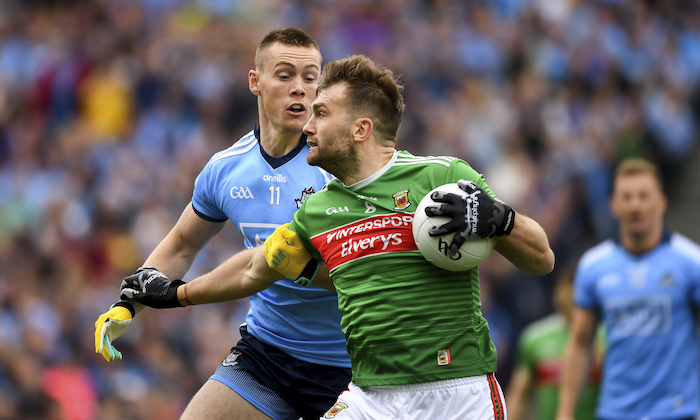 On the ball: Aidan O'Shea tries to break past Con O'Callaghan. Photo: Sportsfile

Mannion tapped over another point and in the blink of an eye Dublin had gone from trailing by 0-8 to 0-6 at the break to leading 2-12 to 0-8. Mayo were given a glimmer of hope with 20 minutes left when Lee Keegan hit the back of the net - but it was too little to late as Dublin eased their way home with Brian Fenton getting their third goal of the evening ten minutes from the end of normal time.

That brings a curtain down on Mayo’s season that has seen them regain their place in the top four in the country and add a first national title at senior level for 18-years after their league win in the Spring.

But as for the future of this current group of players - there will be a lot of soul searching over the Winter for a number of them if they are to come back again next year. They’ve given their all and never failed to leave it all out there on the field and brought Mayo supporters on an incredible journey over the past decade. It might not end up the way they and all Mayo supporters wanted, but things in life seldom do - but they can hold their heads high, if this is to be the end for some of them.