Mayo’s Connacht final win over Galway was one of those games that you really had to see to believe actually happened - their All Ireland quarter-final win over Dublin was of an equally epic variety.

Mayo had this one won and looked like they had it lost and then won again and almost lost for a final time right at the death, but when the final whistle was blown they were left standing and looking forward to an All Ireland semi-final in a fortnights time.

A game that saw seven goals go in and 31 points in just over an hour is hard to sum up succinctly - but at the end of the day Mayo took their goal chances and proved the difference at the end. But this was a pure team performance - Luke Jennings pulled off a few great saves, Alfie Morrision hit a mother and father of a shoulder on Luke Swan to break his stride as he shaped to shoot for goal early on and Paul Walsh not only scored another goal for the ages showed the coolness, composure and probably a bit of madness to chip the ball up to himself on his own line right at the death.

Mayo led by six points at the break thanks to goals from Walsh and Ciaran Mylett- Walsh’s goal came six minutes in when he picked the ball up down the right hand side, beat three men and fired it home on the run.

Mylett’s three pointer came eight minutes later when he showed a poachers instinct to follow in a Ethan Henry effort for a point that crashed back of the post and he was on hand to palm it home from close range. 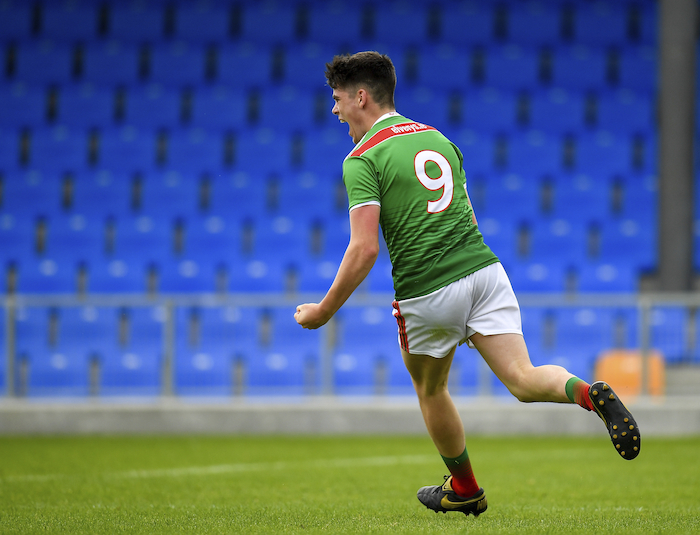 Back of the net: Ethan Henry celebrates his goal. Photo: Sportsfile

Mayo in the first half dominated the middle third of the field with Jennings finding Dylan Thornton with a regularity from his kick-outs and Frank Irwin hit a purple patch from the 21st to 24th minute when he kicked three points on the bounce.

Dublin did show the were not going to go away easily though with Swan a threat throughout and Fionn Murray kicking some beautiful points from placed balls and forcing Jennings into a very good save when he went for goal at the mid point of the half.

If the first half was entertaining, the second half was pure madness - but the best kind of madness that you only every get in minor football, with brilliant play, plenty of mistakes and the fearlessness of youth on display throughout.

Mayo hit their third goal of the day three minutes into the second half thorough Ethan Henry, the Mayo Gaels man may have finished it off in brilliant style - but the goal had it’s beginnings in the charging run from Owen McHale who picked up the ball on his own 14 meter line and drove right through the heart of Dublin before he found Henry just over the half way line and Henry charged forward before applying a delicate finish to the back of the net.

Dublin kept chipping away and tapping over points and the score was at 3-9 to 0-15 with 48 minutes gone when Mayo hit their fourth and what all assumed would be the vital goal of the day - when McHale once again was the catalyst charging out of defence and passing the ball to Ruairi Keane - the Mayo Gaels man set off from well inside his own half and made it all the way to the Dublin penalty area, was forced the ground under pressure - but had the composure to get up and hammer it home to put Mayo six clear again.

Game over - no chance. Luke Curran slotted over a point straight after the same man drove home a goal a minute later and a crazy two minutes of action ended with Alex Rogers firing in Dublin’s second goal of the day after some good build up play involving Swan and Murray and that amazingly had Dublin leading by a point on a score of 2-16 to 4-9 with nine minutes of normal time left.

This Mayo side have shown all year they don’t know when they are beat and John Grady levelled the game up with a point after being brilliantly picked out of Shaun Dempsey - Murray responded for Dublin with a composed score to have Dublin one clear again. 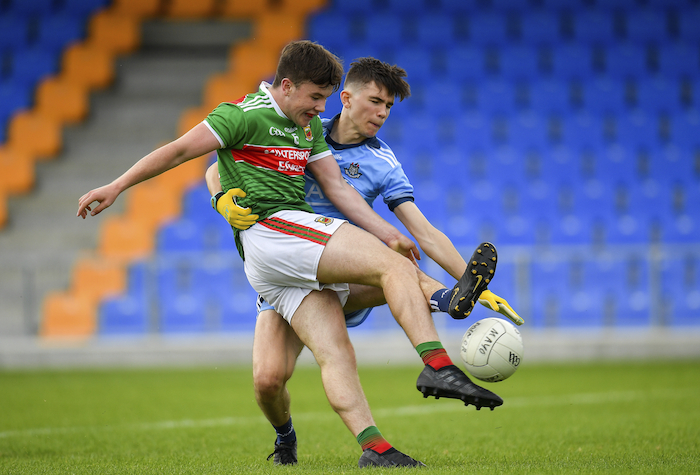 The game swung back in Mayo’s favour once again five minutes from the end of normal time, Paddy Heneghan launched the ball long in on the Dublin full-back line and Rory Morrin found himself one on one with Oran Farrell - the Dublin full back went to attack the ball and Morrin gambled on Farrell not making it and he was right.

The ball tipped off the hands of the Dublin defender and into his path - he kept his composure and calmly slotted the ball under Hugh O’Sulivan in the Dublin goal for Mayo’s fifth three pointer of the day.

Murray hit back for Dublin with a 45 as the Mayo goal came under serious pressure - that they somehow managed to escape unscathed from until the final whistle was blown. Thornton kicked a point for Mayo late on and Curren one for Dublin - but it was backs against the wall and the line for Mayo until the very end.

Entertaining and enthralling from start to finish - you couldn’t have asked for a more entertaining and exhilarating encounter with the added bonus of Mayo marching on to the final four.