John Healy’s No-one Shouted Stop was about the death of a Mayo town - but Mayo made sure that they didn’t shout stop on the football field on Saturday evening in MacHale Park, booking their eighth All Ireland semi-final in nine seasons with a four point win over Ulster champions Donegal.

When it’s put up to them this Mayo side have shown their true worth time after time and while there were many who feared about this game - those involved in the battle on and off the field for Mayo showed no such fear and horsed into Donegal from the off.

Lee Keegan picked up Michael Murphy and Paddy Durcan back from injury was tasked with keeping tabs on Ryan McHugh and from the off - they didn’t give their men room to breath, with Durcan giving McHugh plenty to think about on the back foot and finishing up the first half with two points to his name.

Both sides left their shooting boots at home and Donegal will feel they left this game behind a bit, kicking wide after wide in the second half when they were chasing the game in the final third - but Mayo were deserving of this win, Aidan O’Shea got through a power of work in the middle of the field and drove the side on all evening - while Seamus O’Shea was very effective too - as was Jason Doherty who was top class winning ball after ball until he had to leave the action with a nasty looking knee injury early in the second half.

Donegal hit the ground running and had two points on the board inside the opening two minutes with Patrick McBrearty and Niall O’Donnell bisecting the Mayo posts.

Cillian O’Connor took aim with his first attempt from a free on three minutes, but he undercooked his effort thankfully for Mayo Paddy Durcan was on hand to scoop it over from close range. From the resulting kick-out James Carr intercepted Shaun Patton’s restart and fed the ball to Darren Coen who should have put the ball in the back of the net, but Patton made up for his his mistake saving the Hollymount-Carramore man’s shot. 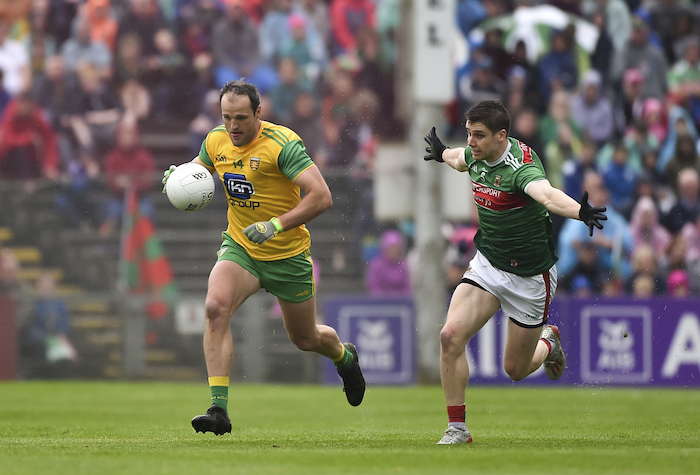 O’Connor levelled it up from a free on eight minutes, but Mayo had two bad misses before that with Coen and Lee Keegan both failing to raise the white flag. O’Connor missed another free on ten minutes, but Mayo did go into the lead not long after when Chris Barrett popped up from the back and looped over a point on the run.

Keith Higgins was sent to the line after picking up a black card for a foul on Patrick McBrearty close in that was converted by Murphy to leave it level at three points each with a quarter of an hour gone.

Jason Doherty edged Mayo in front with a long range effort on 18 minutes and three minutes later James Carr got his first of the day when he pointed after he looked like he had initially taken too much out of the effort. Horan called Darren Coen ashore with ten minutes left in the half bringing in Andy Moran to the fray.

O’Connor pointed a free to make it double scores shortly afterwards and with six minutes to go in the half the Ballintubber man showed a great poachers instinct to palm the ball home from close range after a Doherty effort for a point dropped well short of it’s intended target.

Murphy pulled one back for Donegal from a free - but the final say on the half was left to Paddy Durcan who pointed from 25meters out to send Mayo in leading 1-7 to 0-4 at the short whistle.

Donegal were out on the field a few minutes earlier than Mayo for the second half and they drew first blood with Niall O’Donnell pointing inside a minute - James Carr pulled one wide for Mayo from the next play, but the Ardagh man made up for it not long after finishing off a flowing move down the right hand side. 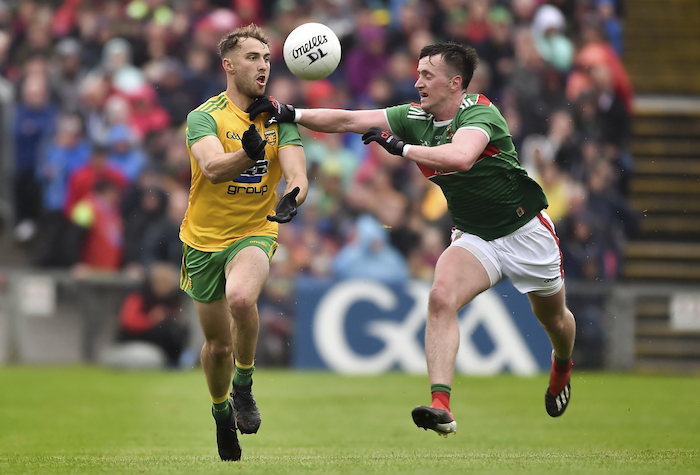 The game was turned on its head five minutes into the second half - Ciaran Thomposon launched the ball in on top of Michael Murphy who had got him isolated on Lee Keegan in the Mayo penalty area and he the Westport man had his hands on Muprhy and David Gough awarded the spot kick.

Murphy dusted himself off and dispatched the penalty with aplomb sending Robbie Hennelly the wrong way in the Mayo goal and it was back to a three point game and Donegal were about to take control.

Mayo then lost Doherty to injury and he was replaced by Kevin McLoughlin who made an immediate impact slotting over a point from a tight angle to keep Mayo in front on a score of 1-9 to 1-5.

Donegal reeled off the next three points with Daire O’Baoill, Patrick McBrearty and Murphy pointing - but they also missed a number of chances a trait that would follow them right through to the conclusion of the game.

Paddy Durcan hit his third point of the day to push Mayo two clear and and two pointed O’Connor frees had them holding Donegal at arms length on the scoreboard if not in the action of the pitch, with O’Baoill’s point their only score in a 20 minute period up to the end of normal time , when Michael Murphy’s fourth point cut the gap back to two just before the seven minutes of injury time that were to be played.

It was edge of the seat stuff from now - but Mayo were the ones to strike for home with Andy Moran showing all his experience in finishing off two late chances to give Mayo a two point win and send them in to the All Ireland semi-final next Saturday.

Shouting stop - not likely with this bunch .