Goals in each half from Maria Reilly and Sarah Rowe, combined with a driving performance from the back by Danielle Caldwell helped Mayo book their place in the TG4 All-Ireland Senior Championship semi-final with victory over Armagh.

Reilly’s goal was the difference at half-time while Mayo took a 1-7 to 0-7 lead into the break at Glennon Brothers Pearse Park. Armagh hit back and Kelly Mallon’s goal helped them into the lead, but Rowe added a second Mayo goal and Mayo took the win.

Both teams were knocked out of the championship at the quarter-final stage last year, but Mayo made the better start here with Rowe’s free in the second minute, while Grace Kelly quickly doubled their lead.

Armagh didn’t find their range until midfielder Caroline O’Hanlon, who started at full-forward, scored in the fourth minute. But Peter Leahy’s charges scored the next four points in-a-row with Sinéad Cafferky, Niamh Kelly, Rachel Kearns and Clodagh McManamon combining to earn a 0-6 to 0-1 advantage.

After nine minutes Mayo had six different scores and they looked to build on that before half-time. The Connacht outfit were in charge but Armagh fought back courtesy of points from Aoife McCoy and O’Hanlon again.

Mayo should have been further in front but Grace Kelly found the on-rushing Reilly and she blasted past Anna Carr in the 15th minute. 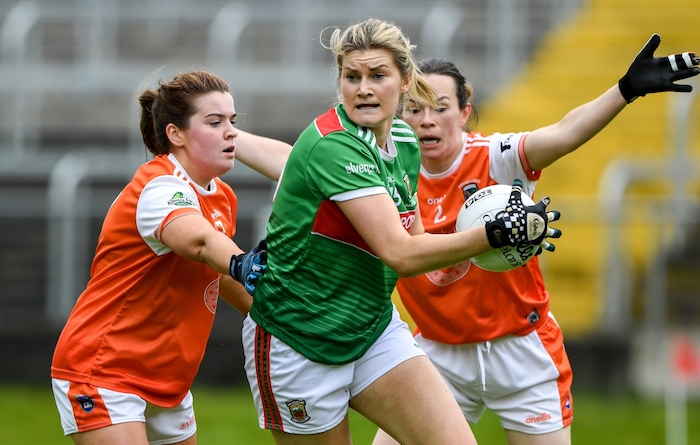 Grace Kelly of Mayo in action against Colleen McKenna and Sarah Marley of Armagh during the TG4 All-Ireland Ladies Football Senior Championship Quarter-Final match between Mayo and Armagh at Glennon Brothers Pearse Park in Longford. Photo by Matt Browne/Sportsfile

Mayo were 1-6 to 0-3 ahead but Armagh didn’t let them pull clear with O’Hanlon and Tiarna Grimes reducing the arrears. Niamh Kelly hit the Armagh crossbar while Aishling Tarpey saved well from Grimes and Ciara Whyte drew a fantastic save from Carr down the other end.

There were nine scoreless minutes until Rowe became the first Mayo player to score twice when she tapped over a free in the 26th minute.

Armagh were back to 1-7 to 0-6 behind with Kelly Mallon’s first point from a free and Catherine Marley brought it back to a goal before half-time.

O’Hanlon missed a free on the resumption but did score two frees in the 36th minute. Grace Kelly and Rowe had extended Mayo’s lead.

Catherine Marley scored her second and then Mallon came up with a stunning goal. She caught the ball tight on the angle but her looping shot nestled in the Mayo net.

Armagh claimed the lead for the first time in the 41st minute but they needed some big scores to pull clear. Instead Fiona Doherty drew Mayo level again before Rowe scored the key goal.

Niamh Kelly had been yellow carded and Mayo were on the rocks but with 13 minutes gone in the second half Rowe burst through the cover and finished into the bottom right corner.

Full-back Caldwell got forward to add her scoring touch but that was cancelled out by O’Hanlon to leave a goal between the teams again.