The magnificent full-forward line of Grace Kelly, Rachel Kearns and Sarah Rowe came up trumps for Mayo at O’Connor Park in Tullamore as they claimed top spot in Group 4 of the TG4 All-Ireland SFC with a deserved triumph over Donegal.

Between them, the outstanding attacking trio registered a combined haul of 1-20 to give Peter Leahy’s side a safe passage in the quarter-finals.

Karen Gutherie with 2-4 and Geraldine McLaughlin, who scored 1-6, led the Donegal resistance, but they miss out on second place in the table to northern rivals Tyrone.

Yet, it was a scoring blitz either side of the first-quarter mark that brought the Donegal challenge to life.

Supplementing Gutherie’s superbly-taken goal on 11 minutes, McLaughlin added a brace of scores to propel the Ulster champions into the driving seat.

Unanswered efforts from Grace Kelly (two ), Kearns (two ) and Rowe subsequently got Mayo back into the groove.

However, it was Donegal who had the final say in the opening period. With Mayo netminder Aisling Tarpey out of position, McLaughlin smashed the net to give her side a 2-6 to 0-10 interval cushion. 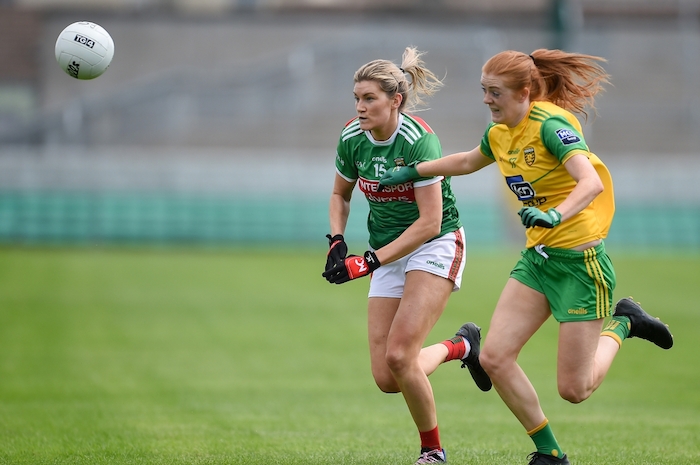 Eyes on the ball: Grace Kelly keeps her eye on the ball against Donegal. Photo: Sportsfile

Consecutive points for Gutherie and McLaughlin significantly improved their prospects on the resumption, but a resilient Mayo spectacularly turned the tables on their opponents with a powerful scoring blitz.

Grace Kelly (three ) and Rowe (two ) bolstered their personal tallies and even though Gutherie interrupted this scoring sequence at the far end, Donegal couldn’t halt the momentum of a rampant Mayo.

A Rowe free restored their advantage on 43 minutes and with Grace Kelly and Kearns proving to be a constant thorn in Donegal’s side, they moved five points clear at 0-21 to 2-10 inside the closing quarter.

Kearns’ palmed finish looked set to ease Mayo over the line, until Gutherie pounced for her second goal in the dying stages.

A square ball denied Gutherie a hat-trick with two minutes remaining on the clock and this effectively ended Donegal’s Brendan Martin Cup hopes for 2019.