They travelled in their thousands, making the long trek from all corners of Mayo from early morning and they waited until the bitter end and it was a sobering conclusion for the Mayo faithful in Fitzgerald Stadium in Killarney - but the end in this came long before the final whistle was blown.

Right from the off Kerry imposed themselves on Mayo all over the park and won the all the key battles to go in nine points up at the half-time break and well on the way to keeping the two points up for grabs at home with them.

Mayo did register the first score of the game inside the opening minute with Lee Keegan pointing from close range after some good build up play involving Cillian O’Connor and Darren Coen.

Sean O’Shea levelled the game up a minute later with a free after Stephen O’Brien was fouled by a Keegan. David Clifford got his first of the day a minute later after he was found by Paul Geaney. The Dingel man whipped over their third of the afternoon after Sean O’Shea drove down the right flank and fed him the ball in a good position.

Clifford put three between the teams after O’Brien won Mayo’s kick-out after the previous score, Kerry dominated the Mayo kick-out in the first half winning nine of the 17 that Mayo took in the first 35 minutes. 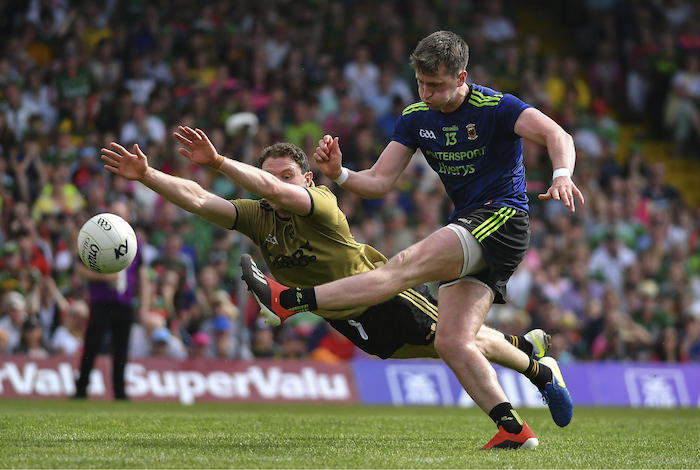 On target: Cillian O'Connor gets away a shot against Kerry. Photo: Sportsfile

Mayo did run tag over the next two scores with Darren Coen slotting over a decent score, and Fionn McDonagh burst though to cut the gap back to one with eight minutes gone on the clock - but it was about to all turn completely in Kerry’s favour.

O’Shea pointed a free after Geaney was fouled, and he repeated the trick not long after with this time Clifford being fouled and he made it three in a row after Clifford was again fouled to have Kerry 0-7 to 0-3 ahead with barely ten minutes gone on the stop watch.

Cillian O’Connor did break that scoring run with a trademark score on the quarter of an hour mark - but Kerry were about to hit a run of seven points on the trot before the half hour mark. James O’Donoghue blasted one at goal that Clarke tipped over then Clifford and David Moran kicked two top class points on the bounce, Stephen O’Brien landed one from play - before Clifford tagged a free from out under the stand and O’Shea hit one from play on he run, with Geaney bringing that scoring to run with his second of the afternoon.

Mayo broke that duck through a Coen point, but O’Brien’s second point of the day came quickly after that. Cillian O’Connor did tag on a sixth point of the afternoon for Mayo before the break - but the went in trailing 0-15 to 0-6. 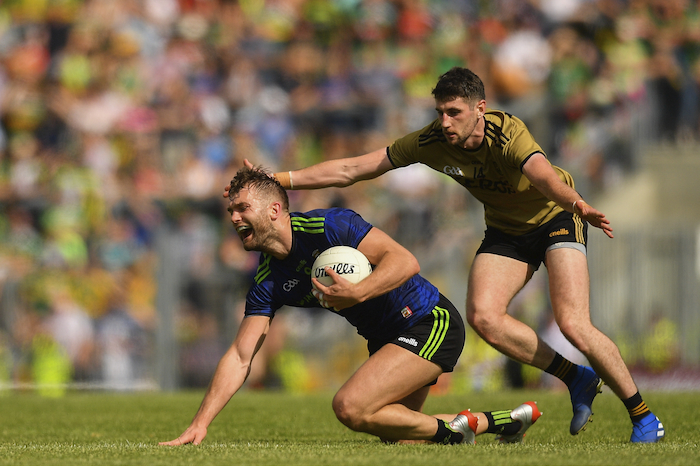 O’Connor managed to get the first point of the second half a minute after the resumption - but it was brief respite for them as Clifford and O’Shea kicked the next two scores to have Kerry ten clear. O’Connor kicked two points between the 54th and 56th minute - with his latter being the one that pushed him into the lead as the top scorer in the championship of all time - but that was all that Mayo had to smile about at the end of the day.

The very next score was the one that really killed the game - O’Brien broke down the left and fed the ball into Paul Geaney who palmed to the net to put Kerry 11 clear and looking forward to Donegal next weekend.

The pace petered out of the game and Mayo did manage to add on a few scores and had a chance to hit the back of the net themselves, but Cillian O’Connor’s penalty was well saved by Shane Ryan with four minutes of normal time left.

It was harsh lesson for Mayo and one they will have to bounce back from quickly before the face Meath in Croke Park next Sunday.