A solid, if not spectacular second half performance saw Mayo book their place in the third round of the All Ireland senior football championship qualifiers in Newry on Saturday night.

James Horan’s men ran out five point winners despite the scoreboard saying there was six in it, with Mayo winning 1-16 to 1-11.

Conor Loftus’ goal seven minutes into the second half was the decisive score. It came at the end of a frantic 90 seconds play that could has seen both sides hit the back of the net before the Crossmolina man did.

First up Caloan Mooney made up an almost unbelievable amount of ground to get on the end of pass that put him clean through on goal, but he drove under his effort and sent it over the bar.

From that score Mayo worked the ball quickly downfield and it ended up in the arms of Jason Doherty who saw his shot come back of the angle of the post and bar and wide.

The resulting kick-out was kept in by a Down defender, but Jason Doherty won the ball, he was fouled as he tried to make up some ground - but with some quick thinking he picked out Loftus who rounded the keeper before putting the ball in the back of the net from close range to put Mayo into a 1-11 to 1-5 lead.

From then on Down were chasing the game and they did have a few chances to rattle the back of the Mayo net for a second time with Conor Francis seeing his shot blocked by the foot of Colm Boyle 15 minutes and eight minutes later Donal O’Hare seeing his effort from the deck well saved by David Clarke. 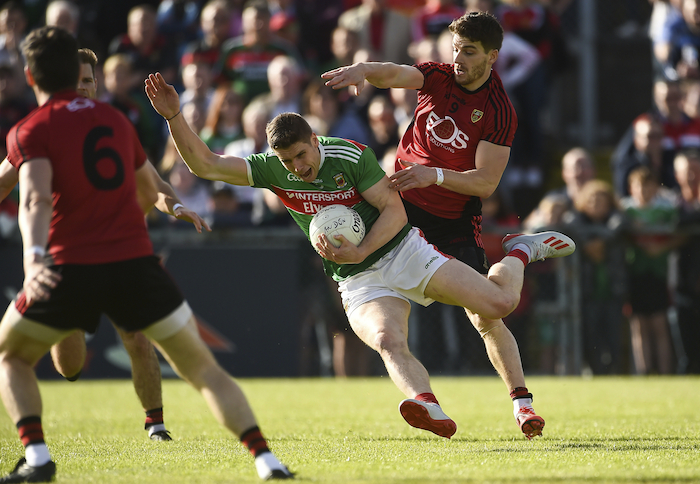 Driving on: Lee Keegan drives forward for Mayo against Down. Photo: Sportsfile

Lee Keegan was the leading scorer in the second half kicking three points, while Moran, Diarmuid O’Connor and Ciaran Tracey all raised the white flag as Mayo ran out five point winners.

Mayo went in leading by three points at the break - shaking off going two points down when Caolan Mooney broke through the heart of the Mayo defence to slam home a goal eight minutes in.

Conor Loftus kicked Mayo into the lead a minute into the action slotting over from the right after Fionn McDonagh was fouled 35 meters out. Connaire Harrison levelled it up shortly afterwards after Down worked the ball up through the heart of the Mayo defence with power and purpose - the Ulster men cut through the Mayo defence a number of times in the opening half - using a strong running game.

Andy Moran edged Mayo back in front - he did well to hold on to a mis-hit Colm Boyle shot that came at him at speed before he fired it over the bar. Mooney’s goal was the next score in the game and Mayo responded strongly with Kevin McLoughlin and McDonagh adding scores from play.

In the middle of that run of scores Darren Coen’s evening came to an early end with the Hollymount-Carramore man picking up a black card for an incident off the ball.

Pat Havern put Down back in front, when he was found in acres of space when Colm Boyle went to drop back and cover the goal and no other defender picked up the Down attacker on the 20 minute mark.

Loftus levelled the game up at 0-5 to 1-2 with a neatly taken score from pay after a well worked move where Mayo showed patience and followed it up with a cutting edge around the D - that was quickly followed by McDonagh’s second point of the day.

Loftus slotted over Mayo’s seventh point of the day from a free after Andy Moran was fouled eight minutes from the break and he backed that up with his fourth of the half a minute before the end of normal time with another placed ball.

Down did hit back in injury time with Owen McCabe and and Donal O’Hare pointing, but scores from Aidan O’Shea and Chris Barrett sent Mayo in leading 0-10 to 1-4 at the short whistle.