Essential information for buyers in a seller’s property market

CORMAC SHEEHY, MD, RE/MAX PROPERTY PARTNERS
The first thing buyers should know is that they are in a seller’s market.

Essential current property advice as you prepare to sell your home

Every seller wants to sell their home quickly and every buyer wants to believe that the home they’re looking at is the “right one”. 147 Meadowbrook, Athlone, County Westmeath.
This modern three bedroom house is situated at the end of a quiet cul-de-sac in a popular residential area of Athlone. Speaking to the Athlone Advertiser this week, Cormac Sheehy, Managing Director, RE/MAX Professional Partners, afforded his pertinent views with regard to the current state of the property market within Westmeath.

Irish mortgage holders still paying for mistakes of the past

Commenting on the most recent Central Bank Retail Interest Rates publication for February, Brokers Ireland said the increase in the volume of new mortgage agreements of seven percent year-on-year in February and particularly the 23 percent increase month-on-month between January and February 2021 reflects the increasing demand for mortgages, despite the ongoing pandemic.

The organisation, which represents 1,225 Broker firms, said the data also shows that while the weighted average interest rate on new mortgages remained static month-on-month at 2.79 percent, the euro area average equivalent dropped from 1.29 percent to 1.27 percent. This means Irish mortgages holders are currently paying a premium of 1.52 percent, or more than double what their euro area colleagues are paying.

Commenting on the most recent CSO Residential Property Price Index for February IPAV, the Institute of Professional Auctioneers and Valuers, said the imbalance of demand over supply that auctioneers are currently seeing in the market is evident in the price increases in today’s index. Property prices in Westmeath have fallen by €7,525 in Q1 2021, according to the latest MyHome.ie Property Report. 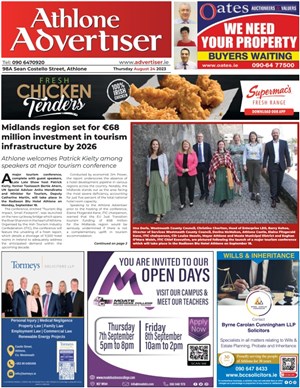