The man who from Kenmare who had “transport issues” according the the public address system in MacHale Park and needed a lift home - will have had plenty to talk about on the trip back to the Kingdom with the new friends who were found for him.

Two penalties, two men sent off for Kerry, another sent to the line for a black card and even more enjoyable for him a Kerry win against a Mayo side who only managed to add on two points with a two man advantage over the final 20 odd minutes.

Nothing ever seems to be simple for Mayo and again on Saturday night - there was more drama packed into 70 minutes plus injury time than some sides have in a whole championship season.

But the Mayo faithful would have taken a drama free game and two points, rather than witnessing their side fail to unpick the stout Kerry defence who put in a massive rearguard action against the odds to head home with the win.

Stephen Rochford named the same Mayo side as started last weekends win over Monaghan on Friday night for this game, but as is the norm there were two changes to the 15 put on to the field of action - with Barry Moran and Jason Doherty coming in for Colm Boyle and Andy Moran.

It was the visitors in their new gold away kit who hit the ground running with Michael Burns and Barry John Keane sweeping over a point each inside the opening two minutes.

Burns score could have been more costly with David Clifford getting in behind Ger Cafferkey to create a goal chance only for David Clarke and then Eoin O’Donoghue getting a foot in to clear it away from the goalmouth.

Mayo got the scoreboard ticking into the positive from an Evan Regan free on four minutes and 120 second on they were live thanks to a high hanging effort from Barry Moran.

But it was the visitors who responded better with Sean O’Shea Barry O’Sullivan and Paul Geaney all adding points in the next five minutes. 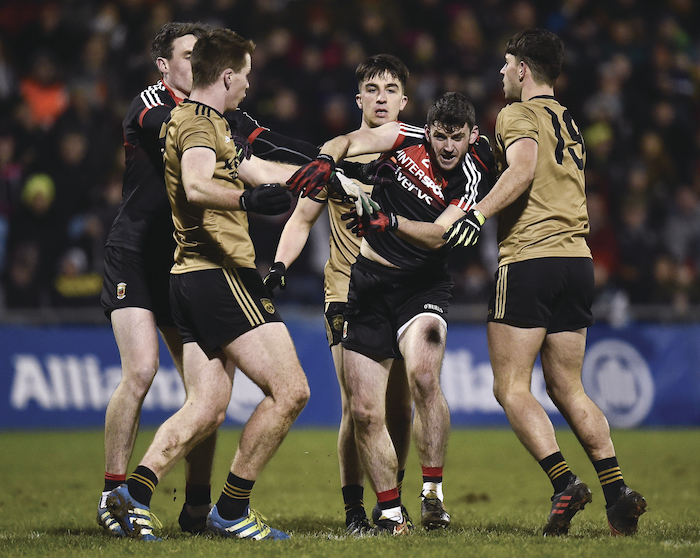 No room to move: Brendan Harrision and Paddy Durcan in a tussle with the Kerry defence. Photo: Sportsfile

Mayo hit back in style with Diarmuid O’Connor rattling the back of the net after Aidan O’Shea won a throw ball just on the edge of the Kerry area and feeding the ball to the Ballintubber man who drove it low past Shane Murphy to tie things up on 12 miuntes.

David Clifford has been pegged as the most exciting new talent in the game and the big Fossa teenager pulled his first effort at a point wide of the target and seemed to pull up a bit lame after it. He did execute his next effort perfectly, but he was withdrawn from the action a few minutes later.

Kerry extended their lead through O’Shea’s second point on 17 mounts and that was pushed out even further when Barry John Keane landed their eighth point of the day two minutes later.

With 12 minutes to go to the break, the first big talking point of the game arrived when Geaney was fouled by Brendan Harrison. The referee allwoed the Dingle man to get his shot off, but once David Clarke saved it - he called the play back for a penalty.

Up stepped O’Shea to take the penalty - he hit it hard and true to the bottom left corner, but David Clarke got down low to save brilliantly. The aftermath of the save saw the first of many off the ball coming togethers and ended up with Shane Nally getting a yellow card.

Kerry were a bit rattled after that miss and failed to find the target with a number of efforts they would have normally found the target from. They did tag on two more scores before Mayo found their scoring range again through O’Shea and Burns.

When Mayo did score again - it was their second goal of the day - through Diarmuid O’Connor’s spot kick, which he expertly dispatched to the net after Neil Douglas was fouled by Shane Enright, two minutes before the break.

Mayo added on one more score before the break though a Jason Doherty free after O’Connor was fouled out under the stand, to send them in trailing by 0-10 to 2-3.

The Burrishoole man levelled the game up a minute after the resumption of hostilities after Mayo have left Kerry out on the field for a good five minutes before they emerged for the second half.

The decisive score in the game came three minutes into the second half when Kerry landed their only major of the game. Mayo were turned over in the Kerry half of the field and they broke with power and purpose.

The ball was fed through the hands of O’Shea and Keane before it was finally transferred to Gavin Crowley who beat David Clarke with a bullet of a shot.

Diarmuid O’Connor hit back for Mayo with a point a minute later after - which was responded to by a Geaney point to keep Kerry’s lead at four points. 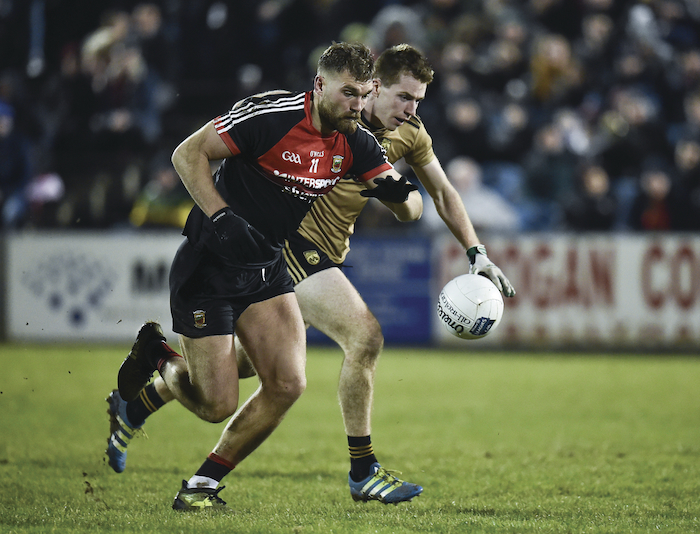 In the seventh minute of the second half Mayo lost the services of Evan Regan who looked to have picked up a very heavy blow to the head as he collided with Ronan Shanahan as he looked to jink his way towards goal. The resulting free was covered by Doherty to leave the score 2-6 to 1-12 in favour of the Kingdom.

Cillian O’Connor replaced the Ballina man and almost immediately had a chance to cut the gap to two point - but surprisingly he pulled his effort wide of the target from close range.

It was Kerry who hit the target next with Paul Murphy and Brendan O’Sullivan both hitting fine scores to stretch their lead out to five points with 20 minutes left.

The game appeared to swing in Mayo’s favour over the course of the next four minutes, first Shanahan picked up a second yellow card and was sent from the field and then three minutes later Crowley was shown a black, having previously picked up a yellow and Kerry were reduced to 12 men for the rest of the contest.

As expected Kerry fell back to protect their lead and left Geaney as the lone annoyance to the Mayo defence for the rest of the game as they battened down the hatches and awaited the Mayo gale.

That gale turned out to be more of a stiff breeze than an a storm as Mayo failed to break down the Kerry defence, with the only real gust coming from Eoin O’Donoghue’s effort which looked destined for the net only to be saved on the line and cleared by Shane Enright nine minutes from the end.

Geaney tagged on another point, while Cillian O’Connor and a injury time free from Andy Moran was all that Mayo could muster on the score board to close the gap to three at the end.

For Kerry this will be a victory they will look to build their season on, for Mayo it will be a disappointing loss and not for the first time they have been unable to take full advantage of numerical supremacy in the closing stages of the game.

Next up for Mayo is a trip to Salthill next Sunday, where Galway will love nothing more than beating Mayo for the fourth time in Stephen Rochford’s tenure.