Two minutes into injury time Adam Gallagher dropped his effort into the arms of Rory Beggan and it looked like Mayo weren’t going to be able to overcome a Monaghan side who were playing with 13 men for the final few minutes.

However Paddy Durcan stepped up when Mayo needed it and he dove the ball over the blackspot from out on the right hand side to pick up Mayo’s first opening day league win under Stephen Rochford’s tenure.

Mayo made a number of changes to the team that was named before hand with Jason Doherty having to miss out due to an injury he picked up last weekend against Sligo and Conor Loftus dropping out of the starting 15 along with Michael Hall. Into the side came last seasons footballer of the year Andy Moran, Castlebar Mitchels sharp shooter Neil Douglas and Shane Nally. There was also changes on the bench, with Cillian O’Connor and Adam Gallagher being added to the list of subs late on. 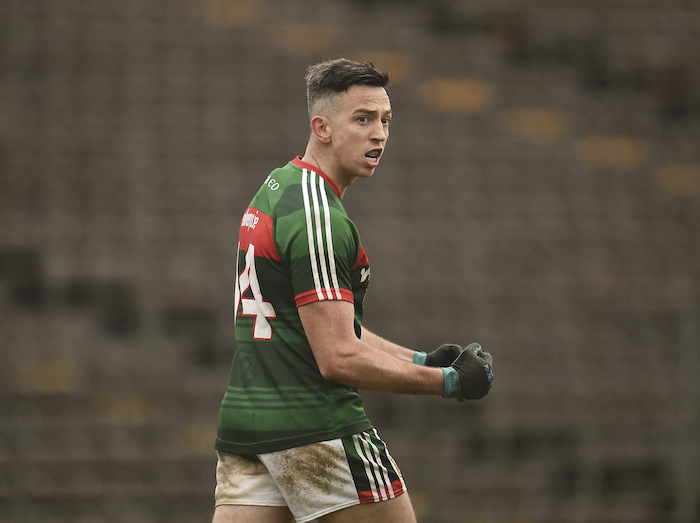 The conditions in Clones was far from ideal, with the ground very slippy underfoot - but the intensity at times wasn’t far off championship level. Monaghan started brightest and points from Karl O’Connell and Conor McCarthy had them two points to the good early doors. Mayo registered their first score through an Andy Moran effort that crept over the with the aid of the post nine minutes in. David Garland slotted over his first score of the day two minutes later to keep his side two points clear.

Evan Regan hammered over a fine left footed score a minute later to cut the gap back to the minimum as the sides started to find their shooting range. It was all tied up at 0-4 each on 18 minutes with Regan kicking a free and Eoin O’Donoghue slotting one over and finding his way up to the Mayo attack.

The young Belmullet man put in a man-of-the-match performance, getting a number of important blocks in and generally being rock solid at the back. Both sides added on three more points each before the break going in deadlocked at 0-7 each at the turn around.

The second half saw Mayo gain the upper hand early on and they were three points clear on a score of 0-12 to 0-9 by the 56th minute, with Douglas landing two 45s and free along with another Regan free and good score from play from Durcan. The Monaghan response came from points off the boots of Jack McCarron and Garland.

The homeside then hit a bit of a purple patch as Mayo’s legs began to tire and points from McCarthy (2 ) and Niall Kearns had them level. with four minutes left in normal time. Cillian O’Connor tried to edge Mayo into the lead from a free that dropped short - the ball was won by Aidan O’Shea who was blown up for over carrying, but in the immediate aftermath among the mass of bodies Ryan Wylie was spotted doing something and was shown a straight red card. Four minutes later he was joined on the sideline by Barry Kerr who was shown a second yellow and Monaghan were down to 13 and hanging on. Mayo maintained possession and tried to work a shot for victory that ended up with Gallagher’s effort that feel short and it looked like Mayo’s chance had passed.

But Durcan held his nerve and showed his experience to slice the ball over the bar from a tough angle to get Mayo up and running and going home with the points in the bag.