A year on from the heartbreak of watching Dublin edging them out in a thriller in Breffini Park, Mayo were on the right side of the result in the All Ireland semi-final in the Ulster venue. This time it was the Cork machine that stood in their way, but the pain of last years defeat and the hard work they put in on the training field paid off for Mayo in the end.

Mayo manager Frank Browne was beaming in the glow of victory and taking well wishes from the Mayo faithful 40 minutes after the full time whistle had blown when he spoke to the Mayo Advertiser. “People will ask me where did that performance come from, it came from standing here last year - 52 weeks ago, Sinead Ahern had broke our hearts and that hurt us. It hurt us so hard. We sat inside (the dressing room ) and it was like a tomb in there and we promised ourselves that, whatever else we’d do - we’d come back and get back here today and now we’re back here. But it’s not worth a damn unless we go on and finish the job, that’s the way I see it.

Mayo went into both the quarter-final and semi-final as underdogs - but that didn’t matter to the one bit the Mayo manager said, “We were 4/1, we were 3/1 we were all those things and it doesn’t matter to the people in our circle. The people on our bus when we pull out of here - they are the people who you need to believe and once they believe it’s all you need. It’s ten years since we went to an All Ireland final and for that ten years I have never stopped believing in this group of girls.” 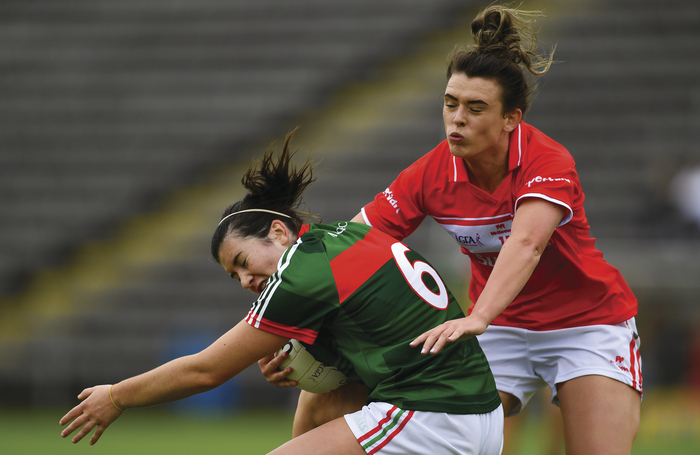 In where it hurts: Rachel Kearns holds onto the ball under pressure against Cork. Photo: Sportsfile

Cora Staunton was outstanding again for Mayo - but this was a supreme team effort and despite having to go off injured and limping badly, Rachel Kearns was determined to get back on to the field and showed the heart and desire, that runs all through this team according to Browne. “She didn’t want to go off and there was tears, but it was tears of frustration because she had wanted to see it out, she had won a ball and got scuttled coming out and got a free for us. But we saw it all over the pitch, girls were putting their heads in, their arms in and parts of their bodies in that you wouldn’t dream of and coming out with the ball. The amount of times I saw the likes of Doireann Hughes winning the ball and making 50 or 60 yards with the ball and Fiona McHale winning kick-outs and driving us on.”

Mayo hit the back of the net three times in the game and that was key to their victory, going for those goals when the chances come is something that they have worked hard on according to the Mayo manager. “In fairness to Cora Staunton, she talks an awful lot about in training that - if we are to win an All Ireland semi-final or a final, when you get in front of goal, you have to be ruthless - you got to go for the kill and that is what we tried to do today.” 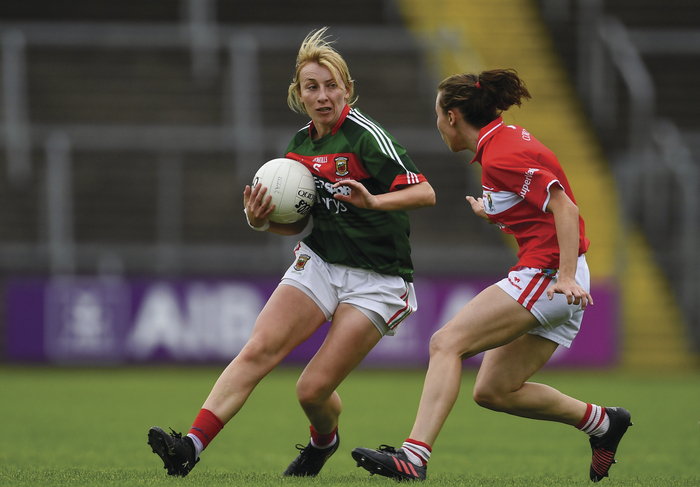 While they hit the rebels for three, keeping it tight at the back was equally pleasing for Browne. “But it has to be said, Cork are great champions, they through the kitchen sink and everything in the sink at us, but bar the penalty I didn’t think we ever looked like conceding a goal. With Orla Finn and Eimear Scally in there - they have really good forwards. But two weeks ago, we had the threat of the Donegal attack, but our platform came from winning the ball out there in the engine room, Aileen Gilroy, Ciara Whyte - who was playing u16 football last year and here she is this year playing in an All Ireland semi-final and more than holding her own, brilliant stuff.

Mayo’s legs never looked like giving in down the home straight and that’s all down to the hard work done by the players and the strength and conditioning team on the dark winter and spring nights to b ready for this time of year. “Yah, but that takes huge fitness, all along we were looking at this time of year - this is championship time, can you remember what we did in the league, no-one can, but people will remember we beat Cork here and now we’re moving on and Dublin are firmly in our sights.”