Mayo made their way back into the All Ireland final for the first time in ten years with a performance that was forged in self-belief, heart, brilliant skill and a determination to not suffer the same fate as befell them last year when they were pipped at the post by Dublin in the same venue.

Even when it looked like it all might go against them again down the home straight when Cork were awarded what looked like a very soft penalty Yvonne Byrne got down low to her left and saved Eimear Scally’s kick at that stage Mayo were two points up and time was ticking down. 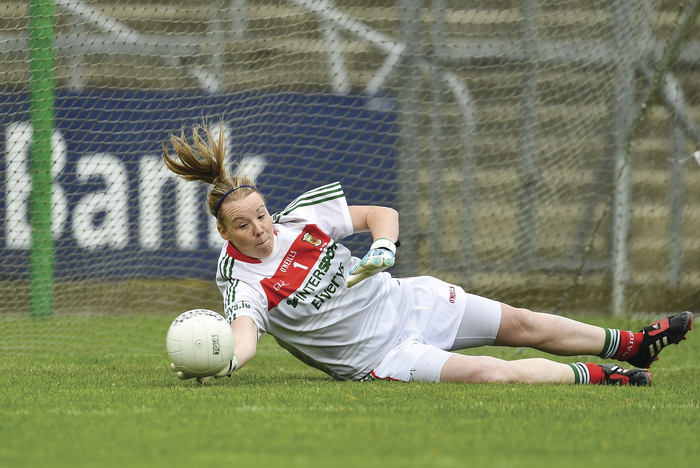 No getting past: Yvonne Byrne gets down to save Cork's penalty. Photo: Sportsfile

Cora Staunton who said after the game that one of the driving motives behind her decision to stay in the Mayo colours this year was to help the younger girls on the side who have never got to experience Croke Park on All Ireland final day - achieve their dreams, helped them do so with a brilliant performance where she finished up with 1-9 to her name. But this was by no means a one woman show, with Rachel Kearns driving runs from centre-half back setting up numerous scores for Mayo. She was forced out of the game with an injury midway through the second half but such was her determination to get back in there and do what could be needed, she was running up and down the sideline keeping herself warm in case she was needed back in the tick of it. Aileen Gilroy and Fiona McHale put in powerful performances in the middle of the park, with the Kelly’s Grace and Niamh along with Sarah Rowe and Ciara Whyte a constant thorn in Cork’s side all evening long. At the back Martha Carter, Sara Tierney, Mare Corbett and Orla Conlon were rocks of strength when needed.

Mayo opted to play with the wind in the first half to try and build up a lead against the 11 time winners and they went in leading by two points at the break, with Staunton scoring 1-6 in the first half. Her goal in the 25th minute of the game was the vital score of the contest putting Mayo into a 1-6 to 0-7 lead. Despite dominating most of the play Mayo found themselves trailing thanks to the excellent free taking of Orlan Finn, the Kinsale girl finished up with 13 points to her name 11 of them coming from placed balls.

Mayo weren’t afraid to go for goals in the opening half either with both Grace Kelly and Ciara Whyte having efforts well saved by Martina O’Brien in the Cork goal. When the median whistle blew Mayo went in leading by 1-7 to 0-8, knowing that Cork were going to come back at them with everything they had in the second half. 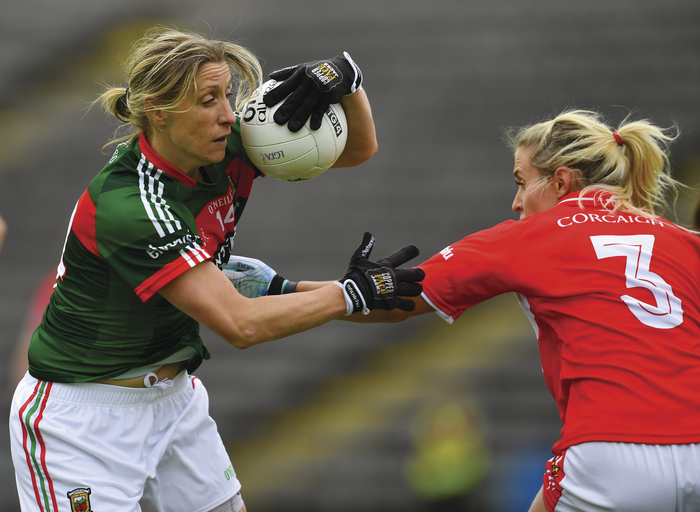 Crahsing through: Cora Staunton sees off the challenge of Brid Stack. Photo: Sportsfile

Ten minutes after the restart, Cork had edged themselves in front by two points on a score of 0-14 to 1-9, with Finn scoring for more points as Cork pressed hard on the Mayo kick-out and forced them into a number of turn overs, but Mayo weren’t for turning and with 13 minutes gone in the half they scored their second goal of the day. Fiona Doherty charged up the field and found Aileen Gilroy who had minutes before seen a goal chance flash wide of the post, but this time the St Brigid’s midfielder made no mistake hammering the ball home to the back of the net. Mayo lost Doherty to the sinbin not long after, but they responded and rallied in style bagging their third goal a minute after she left the field. Sarah Rowe took a effort for a point that looked to be tailing wide, but Amy Dowling who had only come on to the field for the injured Kearns followed it in and palmed the ball to the net, putting Mayo 3-9 to 0-14 into the lead and in control of their destiny. 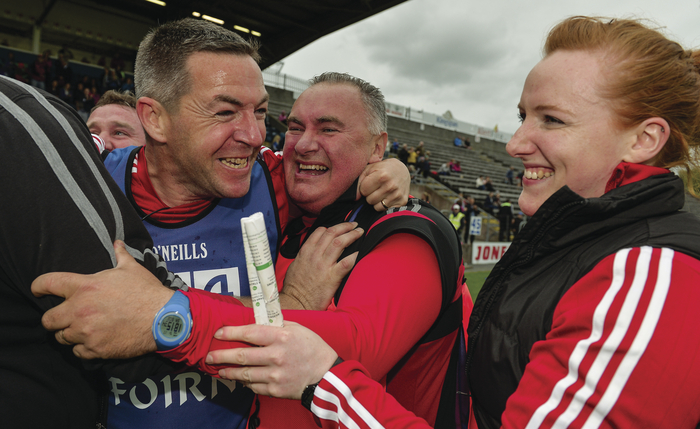 Back in the final: Frank Browne celebrates with Derek Walsh and the Mayo backroom team at full time. Photo: Sportsfile

Cork came back at them and threw everything they had at Mayo, but the Mayo defence would not be moved and even when Cork got the gap back to just two points and were awarded the penalty the Gods were shining on Mayo with Byrne’s save and they were able to keep Cork at a distance and wrap up a deserved victory that sends them back to Croke Park in a few weeks time and in with a chance of claiming a fifth All Ireland title.