It wasn’t pretty for a long time, but when it came to the crunch Mayo dug deep and ground out the win the required against Derry in MacHale Park. The wide count almost tallied the scores for Mayo on the day, as they looked like they might kick themselves out of the championship and only for a late rally they could very well have been looking at the rest of the summer free from inter-county action.

Aidan O’Shea who there had been doubts about going into the game, started his first match for Mayo since the All Ireland final replay last Autumn, not only got through the 70 minutes of normal time - he also played out the 20 minutes of extra-time and put in a man-of-the-match display. Donal Vaughan also came into the the starting 15 with Diarmuid O’Connor and Seamus O’Shea the two players to miss out from the team that was named on Friday night.

Derry went in leading by a single point at the break in normal time on a score of 0-8 to 0-7, with Niall Loughlin kicking five points in the opening 35 minutes and Ryan Bell adding on two fine scores and Benny Heron getting the other for Damien Barton’s team. Derry could have had a goal 25 minutes in when Carlus McWilliams punched a hole in the Mayo defence, his shot was well saved by David Clarke and the resulting rebound, hit McWilliams’ knee and then came back off the post and back off Stephen Coen’s knee out for a 45.

Mayo were wasteful in front of the posts in the opening half kicking eight wides and that continued right through to the end of normal time. In the first half they relied on Cillian O’Connor’s free taking ability to keep them in touch, with the Ballintubber man kicking five pointed frees, and Lee Keegan and Andy Moran both adding a point each.

The second half saw Mayo exert almost total dominance on the game, but their wastefulness in front of goal looked like it was going to cost them dear. They kicked nine wides over the final 35 minutes and dropped another few efforts short of the target as they looked to reel in Derry. 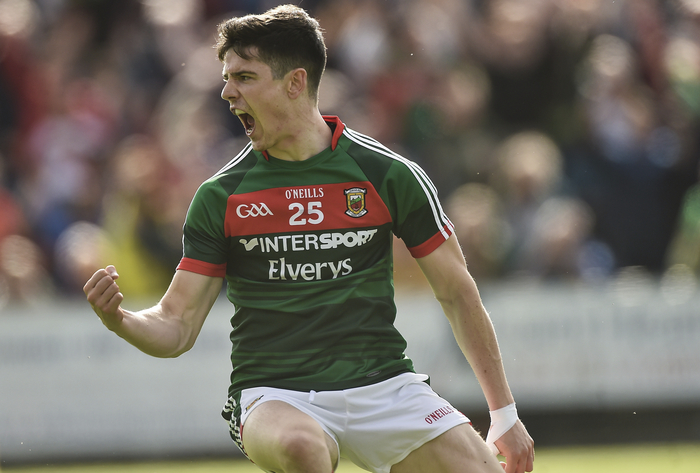 Mayo had a number of goal chances with Ben McKinless pulling off a number of fine saves from Cillian O’Connor and Andy Moran also seeing another effort come back off the post. Derry pushed themselves into a two point lead with 11 minutes to go and it looked like they’d hold on as Mayo continued to put the ball wide of the target. Paddy Durcan cut the gap back to just one, with three minutes left on the clock and two minutes later it looked like Mayo had stolen it. Conor Loftus needed no invitation to pull the tirgger and he fired a brilliant shot to the roof of the net, from close range. That put Mayo into a two point lead and a minute later he Crossmolina man stretched it out to three with a smartly taken effort. The home faithful thought they were home and hosed and were looking forward to round three next weekend. But it’s never that simple for Mayo. Derry had to go for broke and they did. McWilliams dropped the ball into the Mayo danger area and Mark Lynch who wasn’t on the field that long, rose highest to flick the ball to the back of the net and pull Derry level and send the game to extra time. 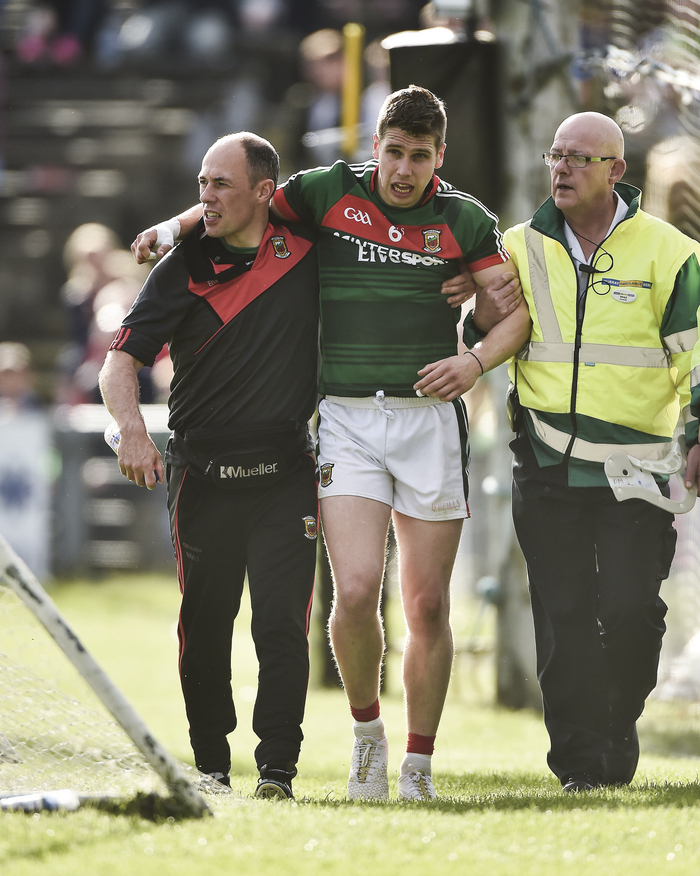 Helping hand: Lee Keegan is helped off the field near the end of extra-time. Photo: Sportsfile

Mayo regrouped in the few minutes before the restart and they came out with intent to knock the stuffing out of Derry as quickly as possible and within four minutes they were five points clear, Kevin McLoughlin kicked a point from play and O’Connor fired over one from a free. From the resulting kick-out the ball went straight to Jason Doherty who made no mistake from close range and drove the ball under the Derry keeper’. O’Connor added on another not long after - but it wasn’t done and dusted just yet. Lynch kicked a point and two minutes later, Derry were given a penalty, but David Clarke stood tall and saved James Kielt’s effort. Mayo were then reduced to 14 men before the short whistle of extra time, when Paddy Durcan was sent to the line, but they still were able to tag on two more points through Aidan O’Shea and O’Connor to ease the pressure ahead of the final ten minutes. The second half of extra time was a cake walk for Mayo as the fight was gone out of Derry at that stage, but both Lee Keegan and Cillian O’Connor exited the action before the close and Mayo will hope it’s nothing too serious for either ahead of next weekend.