Mayo will be kicking their heels for the guts of two months now, until they get into championship action and you can only feel that’s a pity - because the intensity and passion they showed in the second half of this win over Donegal is something they will need to recreate come summer time.

They looked to be in serious trouble at half time, with Donegal who played into the teeth of a strong win leading, 0-11 to 1-5 at the short whistle and full value for that lead they were. The introduction of Aidan O’Shea ten minutes into the second half proved to be the turning point, with the Breaffy man throwing himself into the action right from his introduction as the intensity and hits were turned up a notch.

Mayo could have hit the back of the net right from the restart with Lee Keegan’s palmed effort tipped over the bar by McGinley in the Donegal goal. But rather than kick start a Mayo revival it was Donegal who went back down the field and scored two points on the bounce, from wing forward Cian Mulligan to put his side into a 0-13 to 1-6 lead. But that was the last time that Donegal raised the white flag, with Mayo outscoring them 0-6 to 0-0 in the closing 35 odd minutes.

Not that it was all good from Mayo Cillian O’Connor’s radar from placed balls was still off the mark as he pulled three efforts wide from very scorable positions for a player of his abilities in a 16 minute spell at the start of the second half. 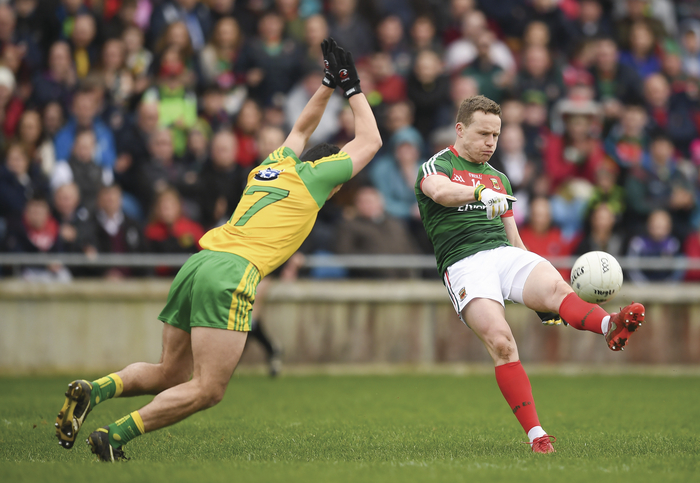 Andy Moran shoots for a point against Donegal. Photo: Sportsfile

Keith Higgins cut the gap back to three points with a well taken score on the run on 53 minutes and three minutes after that Donegal were reduced to 14 men when Eammon Doherty was sent off for a tangle with O’Shea. Not long before that the game looked like it was about to get out of Cormac Reilly’s control as coming together of a number of players from both sides saw three yellow cards dished out to Donegal and one to O’Shea for Mayo.

O’Connor found his range once more with a close in free with 15 minutes to go, to close the gap to two points and he tagged on another four minutes later to leave just one between the sides. The levelling score came 11 minutes off the boot of Lee Keegan whose shot swung just inside the post on the near side.

Mayo held their nerve down the closing ten minutes and O’Connor hit two more frees to get Mayo over the line and ensure that they didn’t have to rely on results elsewhere to keep their division one status for next season.

Eoghan Ban Gallagher and Cian Mulligan kicked points for Donegal inside the opening two minutes of the game to show that Donegal meant business. With three minutes gone Cillian O’Connor chased in after the ball and collided with Mark Anthony McGinley. Cormac Reilly awarded a penalty and the Ballintubber man drove it to the back of the net. 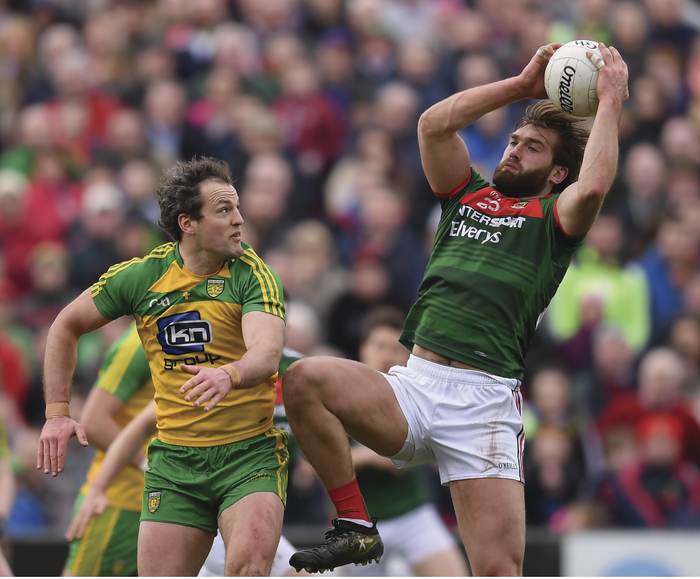 Mayo followed it up with points from Andy Moran and a brilliant effort from Danny Kirby and an even better one from O’Connor from behind the 45m line to put Mayo into a 1-3 to 0-2 lead seven minutes in.

Donegal responded with Michael Murphy tapping over a close range free, which was followed by a Ciaran Thompson effort. Shane Nally responded for Mayo keeping them in front by three, but Donegal were about to really impose themselves on this game, kicking six points on the bounce. Murphy landed two frees and a 45, with Thompson, Jamie Brennan and Martin O’Reilly all raising the white flag to leave Donegal in front by 0-10 to 1-4 after half an hour. Colm Boyle hit one from out on the right 20 minutes after their last effort had gone over, but that was replied to instantly by Frank McGlynn to leave Donegal 0-11 to 1-5 to the good at the turn around.