If there wasn’t enough pressure on Conor Heneghan when he lined up a free into the Davin Stand, as he started his run up the PA announcer decided to let everyone know there was going to be three minutes of injury time in the game. But the Hollymount-Carramore man held he nerve and drove the ball right between the posts to level up this All Ireland final at 1-11 each and send it into extra time.

What ever was said by Damien Egan to his team at the break between the end of normal time and the start of extra time, it worked a treat as they hit 1-5 over the next ten minutes to set up this historic third win of the All Ireland Post Primary Schools Senior B Championship. There was nothing between these two sides all day and it was going to take a scoring burst like that to determine the outcome of this contest. 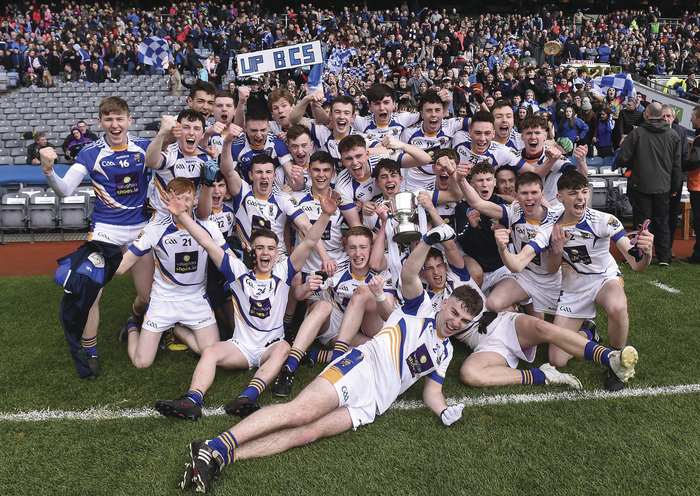 The game couldn’t have started any better for Ballinrobe CS, the dominated the play in the opening exchanges and after ten minutes were leading 1-2 to 0-1, with Heneghan finding the back of the net after Thomas Conroy had fed it into his path 15 meters out from goal. Ballinrobe could have had three goals to their name in those opening minutes, with both Liam Hughes and Cathal Slattery missing good chances.

It took St Ciaran’s a while to get going, but once they did, the Tyrone men showed they were not going to bend to Ballinrobe’s will that easy wth scores from Pascal Donaghy (2 ) and Daniel Millar bringing them right back into the contest. Slattery kicked Ballinrobe’s final score of the half 19 minutes in and from then on it, the Ulster men took control with Donaghy, Tomas Foy, Millar and Cormaic Donnelly all kicking points to send their side in leading 0-7 to 1-3 at the break.

Ballinrobe came out strong after the restart and points from Oisin Mullin and Heneghan saw them edge back in front, but then came the biggest challenge Ballinrobe were going to have to pull themselves over in this game. Joseph Oguz took a shot from out under the Cusack Stand that tailed across the face of the goal, no Ballinrobe defender went after it leaving their goalkeeper Cian Ferriter to try and close down the ball against Caoimhin O’Donnell. The St Ciaran’s full-forward got the ball before it crossed the endline and fed it back to Cormaic Donnelly who fired it to the back of the net putting his side two points to the good. 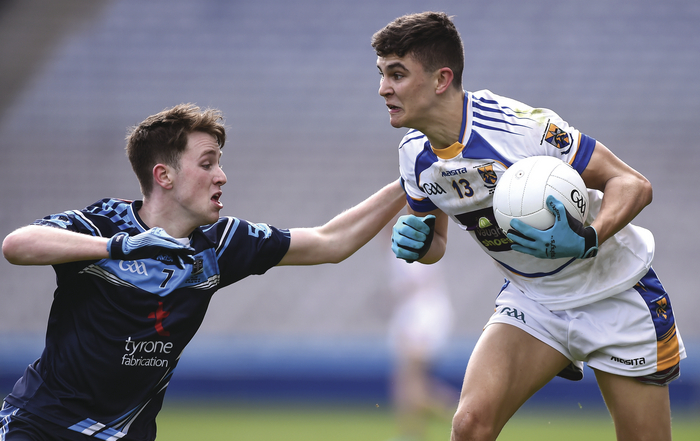 But Ballinrobe showed their fight and heart, with first Adam Barrett and then Slattery kicking fine scores to level it up once more, then Slattery hit another, followed by two frees from Heneghan to put his side into a 1-10 to 1-7 lead with 12 minutes left. Back came the St Ciaran’s men with Donnelly kicking two of the finest 45’s you’ll see all year in Croke Park, then with five minutes left Caoimhin O’Donnell pulled the trigger from distance to level it up once more.

With three minutes to go, St Ciaran’s full back Conor Quinn charged down the Hogan Stand side of the field and slipped the ball to Tomas Hoy who hooked it over Ferriter’s bar to leave Ballinrobe trailing by a single point with time almost up. But to their upmost credit they kept their heads and played sensible football and were rewarded when Slattery was fouled 35 meters from goal as he shaped to shoot. Up stepped Heneghan and levelled matters with the occasion could have got to him, to send the game to extra time.

Extra time exploded into life two minutes after Brian O’Halloran and Donaghy swapped early points. The ball was won by Ballinrobe out on the Cusack Stand side of the field and worked by Heneghan to Nathan Moran, the Hollymount-Carramore man spotted the run of Darragh McGovern who fired the ball low to the back of Paul Traynor’s net. Ballinrobe tagged on three points within minutes through Conroy, Slattery and sub Tomas Quinn to put their school into a 2-15 to 1-12 lead.

But there were a few more twists to come yet, with Ciaran Traynor getting in for a goal for St Ciaran’s after the Ballinrobe defence switched off for a split second and O’Donnell found him with a quick free, Donaghy kicked a point not long after but just before the turn around Heneghan settled his sides nerves with a point to leave them 2-16 to 2-13 up with just the final ten minute period of extra time left.

The final ten minutes were stop start, with both sides out on their feet down the closing stages and the sides going score for score, with Slattery’s pointed free two minutes into injury time putting Ballinrobe three clear and looking to be home. There was one last chance for St Ciaran’s but Callum Corrigan drove his shot over the bar at that was that, and Nathan Moran climbed the Hogan Stand to life the Paddy Drummond Cup for the third time in the history of Ballinrobe Community School.