There was no need for the Mayo faithful who made the 300km round trip to Tullamore to switch on their radios on the way home if there was more than one happy soul making the trip back west on Saturday evening. For they had plenty food for thought and conversation after seeing Mayo produce one of the gutsiest comebacks in memory to edge into the All Ireland u21 final on Saturday, April 30 against Cork.

In a game played a frantic pace, Mayo looked to have won the game with a brilliant first half performance that saw them go in leading by 1-7 to 0-4 at short whistle, but with 13 minutes left on the clock a ravenous Dublin outfit had outscored Mayo by 1-9 to 0-2 to lead by four and the game in their hands it seemed.

But if we’ve learned one thing about this group of Mayo players over the past few years it’s that they don’t know when to quit and when the big questions was asked of them, they were the ones that found the answer and not through luck or fortune, but through sheer hard work and determination. They kicked six points down the home straight and when Conor Loftus showed nerves of steel to kick the winning point four minutes into injury time all that hard work was rewarded handsomely with a place in the final.

The strange thing about this game was that going on what happened in the first 30 minutes you couldn’t see anything but a Mayo win. The dominated the opening half with a supreme defensive effort from front to back putting Dublin completely off their game for the most part, with Eoin O’Donoghue, David Kenny and Michael Plunkett forced a number of turnovers from Dublin players. While the running of Shairoze Akram and Michael Hall supplemented the attack, which was being well served by Fegal Boland, Brian Reape and Matthew Ruane and Stephen Coen from midfield.

One name might be glaring in it’s omission from the list of impressive perfrormers in the first half and that’s because he warrants special praise even on a day where it was a massive team effort to get Mayo over the line. But Diramuid O’Connor was simply outstanding from pillar to post. The young footballer of the year showed once more his standing in the game is only going to get even higher. He scored 1-1 over the hour, but his overall infulence on the game was much greater than just on the scoreboard. His willingness to work and cover the ground in both defence and attack was phenomenal and when Mayo needed a man to play the out ball to in a tight situation he was invariably the man who popped up on the shoulder and took the ball on and calmed down the situation. 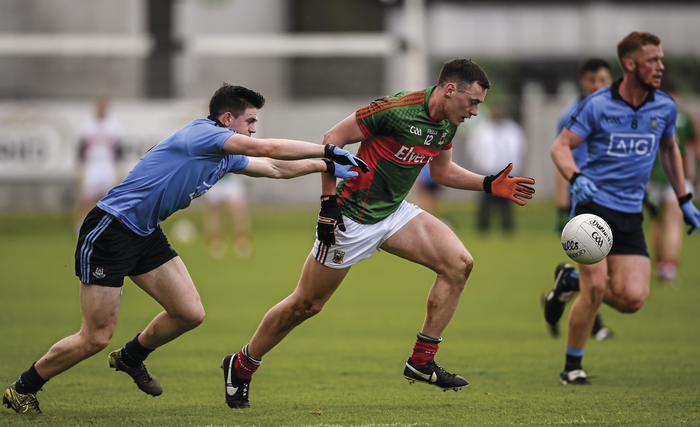 He was also the man who was fouled to earn Mayo what in all fairness looked a softish free to win the game, but there had been a few decisions that didn’t go in his favour one in particular about ten minutes from time that raised the ire of the Mayo faithful when Niall Cullen failed to give him a free in. O’Connor’s first half goal was pure class too, Conor Loftus found Liam Irwin close into goal with 18 minutes gone. Irwin spotted O’Connor breaking into space and played it in front of the Ballintubber man, but with the goalkeeper coming at speed rather than catch the ball and try and take it round him, O’Connor showed the quick wittedness to flick the ball over Lorcan Molloy’s head to put Mayo into a 1-2 to 0-0 lead.

Truth be told Mayo could have been a few more points clear at the turn around, but they also had been given a warning by Dublin that they were not going to go away that quickly with Con O’Callaghan and Glenn O’Reilly kicking two points in quick succession before the break. The followed hat up with another double of white flags right from the restart to cut the gap back to four and the game was on. And with 40 minutes on the clock it was all square when that man O’Callaghan who was starting to terrorise the Mayo defence hit the back of Mattie Flanagan’s net to leave it at 1-8 a piece. Over the next seven minutes, Dublin were going to add on five more points to Mayo’s solitary score from Fergal Boland and tip the game in the metropolitans favour it seemed.

But Mayo weren’t for moving, Liam Irwin swung one from play to bring the gap back to three with nine minutes left. He clipped over one from a free on 55 minutes, then an other from a placed ball a minute later and the gap was back to one point. Two minutes from the end of normal time, Matthew Ruane picked up a breaking ball in the middle of the field and the Breaffy man charged right through the heart of the Dublin defence before clipping it over the bar with his left boot on the run to level the contest up. But a minute into the four minutes of stoppage time, Dublin hit the front once again with a great score by Colm Basquel and it looked like it could be heartbreak for Mayo. 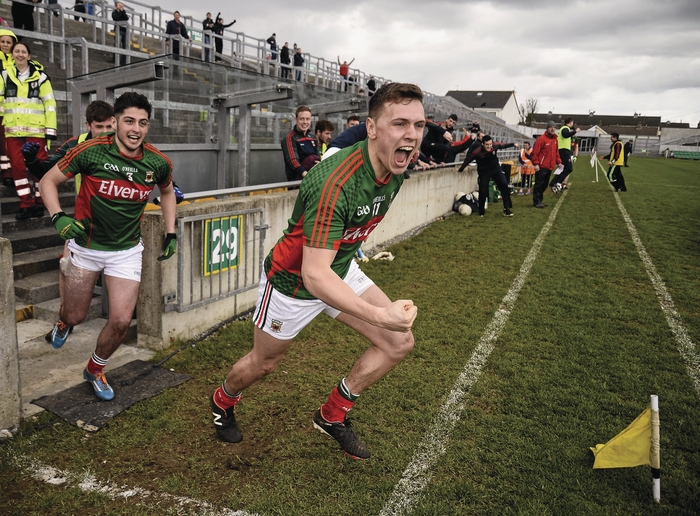 But this team weren’t going to die that easy and O’Connor was fouled and Loftus swung the ball over from the left hand side to make it 1-14 each and it was going to be a case of not making any mistakes from either side. Cullen ended up throwing the ball up on the Dublin 45 m line and after some jostling O’Connor emerged with the ball and made a cut for goal, but according the Fermanagh man he was fouled and the rest is history.